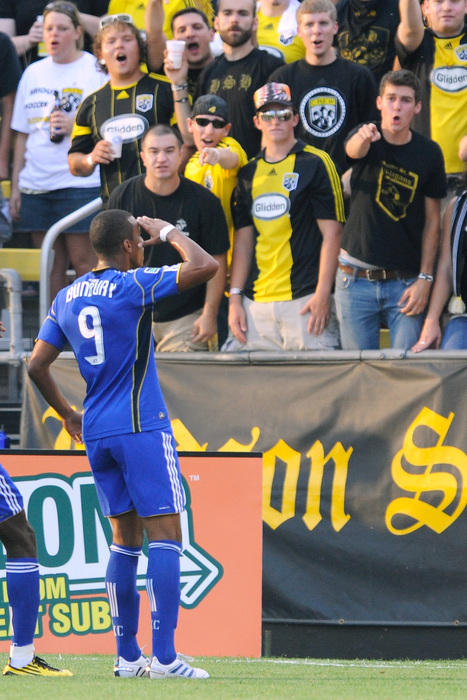 Okay, maybe it's not quite "The Shot Heard 'Round The World," or "The Miracle On Ice," but when you're a fan and you endure a month like Wizards fans have just come out of, hyperbole is mandatory.

For all the fire coach Peter Vermes has been under of late, he was stellar tonight. Vermes' management of this game is to his previous managements, starting XI's and subs; what Ned Yost's management of the Royals bullpen is to that of Trey Hillman's. It was that important in tonight's win. Masterful work, Peter.

What did we actually just do?

Man of the Match: The Wizards TV broadcast gave the award to Bunbury for scoring the lone goal of the game, which also happened to be the first of his career. Any other night, I completely agree and follow suit. Not tonight, though. Had it not been for keeper Jimmy Nielsen, the final score could have easily been 3-1, in favor of Columbus. Nielsen continues to come up huge and shows why the Wizards were willing to part with Kevin Hartman after last season. The fact that Nielsen isn't in the Starting XI for the MLS All-Star game later this month is a minor crime.

At the halfway point of the season, we now sit on 15 points, good for 5th in the Eastern Conference. Not to mention, we sit only 2 points behind Chicago for 4th in the East. Although, the final playoff spot is currently 7 points clear, a strong second half could at least give the fans something to cheer about and look forward to next season for.

Saturday, we trek back halfway across the country, back past Kansas City and play at the Colorado Rapids. Colorado is one of the 4 teams tied for that final playoff spot. Pull out a result Saturday, and then we can talk crazy thoughts.

Until then, enjoy tonight and be happy. Who knows how long it might be until this feeling resides in us again.