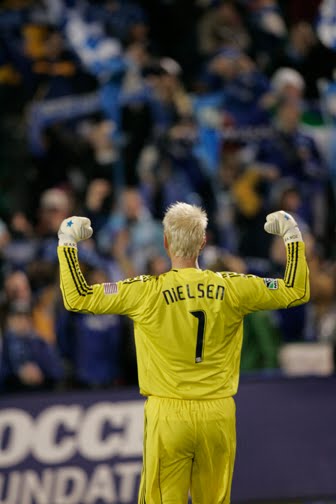 Sometimes I think there's three of this man in the net.

Even a full 30-some hours later after pulling off the shock victory on the road at the expense of the Columbus Crew on Wednesday, I still find myself giddy and excited about this team to no end - just as I was after beating DC United 4-0 to open the season. It's amazing what one little victory will do for a fan's psyche.

I've maintained throughout this season, and all its struggles, that this team has way too much talent to continuously be getting results like they have. Even the gloomiest of the pessimists have to admit that.

So, what do the Wizards have to do to turn one result into a second? Three key places they could start...

1. Will coach Peter Vermes stick with the recipe of success from Wednesday night's victory?

Realistically, probably not. From everything we've seen of Vermes lately, he's stubborn. He has a group of players that he likes, that he has been around throughout his front office time in Kansas City and that he feels comfortable with. Reality sucks, because winning was fun.

In all reality, winning Wednesday night was probably a fluke. Here's what I mean: There were two big changes in the starting XI from the Chivas loss - Bunbury for Wolff and Rocastle for Jewsbury. Each replacement played great. Only problem is that those two were likely in that game - one Vermes expected not to win - to keep his boys (Wolff in particular) rested and ready to play near a full 90 in the game he anticipated having a chance to win.

Translation: Wolff is on 7 days rest, just like Vermes planned, and ready to play a full 90. Translation: We're going to really struggle to score in this game.

As for the midfield, I'm not nearly as worried about Jewsbury being back in the starting XI. While he doesn't offer as much attackingly (I made that word up) as he may once have, he's a quality player. Where I'm really interested to see who starts on Saturday is the holding midfield spot. Will Stephane Auvray be ready to go another 60+ minutes just 72 hours after going 83 minutes on against Columbus? He's yet to play a full 90 since returning from his knee injury. Also, you would think we're bound to see Graham Zusi in the lineup somewhere; whether it be the spot occupied by Rocastle Wednesday, or maybe even to give Davy Arnaud a game off. That wouldn't be such a terrible thing, now would it?

2. Can the center of defense continue to build off Wednesday night's slightly improved performance?

This sort of pertains to question number one, actually. I really don't expect to see Shavar Thomas in the starting XI Saturday night. He's started all three games since being reacquired via trade, and while he's player pretty well, Matt Besler is still the future center half on this team. He was listed as Probable for the game at Columbus not dressing against Chivas, so I fully expect, and fully hope, to see him play Saturday.

That said, I love the Conrad-Besler center of defense pairing. Their styles compliment one another very well, and I've yet to see Besler make a completely boneheaded play this year - more than I can say for the rest of the center halves on the roster. Conrad is a strong, savvy veteran who just (most of the time) gets the job done. Besler is a lot quicker and has the ability to catch back up if he gets beaten, or makes a mistake. That pairing was a real stone wall the first two games of the season, and not until Vermes messed with it did the defense (and team as a whole) falter.

Jimmy and Matt in the back, please, Peter.

3. Can Jimmy Nielsen stand on his head and do cartwheels for an entire 90 minutes, again?

One would think that, after as many times as he's done it this year already, The White Puma would eventually run out of magic and not be there to save the day when he's needed most, over and over again. That certainly wasn't the case Wednesday against Columbus. Jimmy was so good I had no choice but to name him Man of the Match. The only thing he failed to do in that game was make another save with his face. But, for keeping the clean sheet anyways, we'll let that one slide.

After learning more about how the Colorado attack has evolved from my friend Craig de Aragon in Thursday's Opposing Blogger interview post, I find myself feeling rather good about this matchup. With the Rapids going with Conor Casey alone up top and Omar Cummings playing more on the right wing, in my opinion, that is a style of attack the Wizards should be inviting opponents to play. The strength of the KC defense, outside of Nielsen, is obviously the play of the two fullbacks Michael Harrington and Roger Espinoza on the right and left, respectively.

The weakness is in the middle. If an opponent wants to go ahead and move a forward away from our area of weakness, and into our area of strength, I say we let them. The key to the defensive third for KC, and something I'll talk more about Saturday afternoon leading up to the game, is how well Espinoza can contain Cummings. He was shaky early on against Columbus. If he get's beaten by Cummings, he won't be able to recover before something bad could happen.