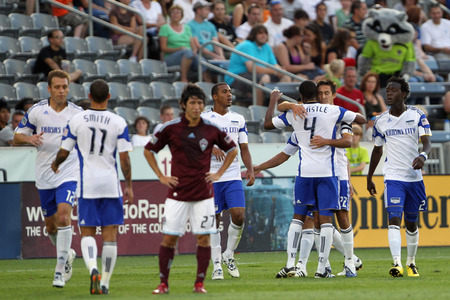 We scored again! Who'da thunk it?

While it wasn't the 3 points we were all hoping for, and that it looked like we deserved for the entire first half, it was nice to drop points and still walk out of Colorado with a point. Not one other time this season could we say such a thing; not against Seattle, Columbus (the first time), or Dallas. Those times we were playing for the point and when we were burned, we left empty-handed. Maybe that will teach them to take the initiative and score first once in a while.

What a week it was. Heading into Wednesday's trip to Columbus, this team was nothing more than a dead man walking, going through the motions and playing for nothing. Then, something incredible happened - they scored a goal. I know - crazy, right? They somehow pulled of the shocker against the Crew. There was no way they could recreate their that fluke performance twice in a row - let alone in the second half of a four-day back to back schedule, right? Wrong. For 70 minutes on Saturday, they were the better team and it wasn't even close.

Davy Arnaud must have check in on The Daily Wiz before tonight's game and seen that he had been called out. He got the scoring off on the right foot for the Wizards with his 20th minute goal, his second of the season and first since opening night. The scapegoat (at least the one not named Josh Wolff) of late, Davy played a steady and well-thought out game. He didn't panic in decision making situations and always seem to make the right play.

Missed opportunities came back to haunt them in the end, though, when Conor Casey worked a big of magic and tied the game at one in the 74th minute. But, it always seemed that regretting so many squandered chances was the way it would end.

The best thing about it... is that it only gets better this next week. After enduring the two game road trip in four days, (and taking points in each game - how wild is that to say?) we can head into the league off week and the game against Manchester United on a highnote, feeling good about our boys. Suddenly, the little exhibition this Sunday isn't the only highlight in an otherwise spiraling season.

A couple of weeks ago, James Starritt from KCW Fans posed the question on Twitter "Other than the new stadium and Man. Utd., what is there to be happy about this year?" I could find little other than the play of Michael Harrington to respond with. Now, all of a sudden there's reason to be excited and reason to look forward to the next league game. Suddenly, you go into the next game with hopes of not only just not being blown out, but knowing your team can, in fact, score a goal and maybe even get a result. You can't let the drudgery get you down, because you're always going to come out the other side. Even the Wizards.

Enjoy this next week and know that when we return to league play a week from this night, we're taking on a team we've already drawn on the road and that our team is playing its best soccer in three months.

More in-depth thoughts, reactions and insight into how we arrived at the 1-1 draw tomorrow. Those last 20 minutes really took it out of me. I think I'll have a couple beers.