What Does This Manchester United Game Mean?

Share All sharing options for: What Does This Manchester United Game Mean? 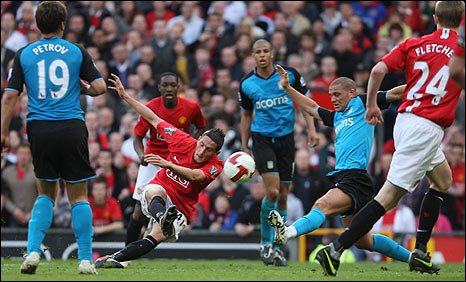 Greatest. Moment. Ever. Here's to hoping we see Kiko Sunday.

Also file under: Who is Andy Edwards?

A post vaguely outlining who this new Wizards fan and blogger that just happened to pop up and cause this two game result streak. The Wizards are undefeated since my creation of The Daily Wiz, just for the record. Anyway, I thought I'd take a bit of time to share a few of my personal soccer favorites and I am. And, what better time to do so than the week our city hosts world giants Manchester United? (I'm a fan, if you can't tell.)

I'm actually a relatively new fan to the soccer world. "New," as in I just completed my first four year World Cup cycle as a soccer fan. I got caught up in the 2002 World Cup and the United States' run to the quarterfinals, but when it was over, so was soccer for me. It wasn't until four years later when the 2006 World Cup came that it actually interested me as a sport, rather than just a USA competition, because I will cheer to death for any team with "USA" across their chest.

But, I wasn't instantly hooked. It actually took me another full year before I learned what club soccer was, and how it was different from the international game. The game that did it for me? 2007 FA Community Shield between Chelsea and Manchester United. For whatever reason, I saw the sport of soccer completely different and a thousand times more interesting. Slowly that evolved into the near 100 percent consuming of my time and thoughts, but if you're a soccer lover, who isn't like that?

So, Manchester United became my club. I had no idea at the time they were the club giants they were. I knew that Ronaldo guy was really fun to watch because he was fast and did good tricks. They also won, so it was set. United would be club team. I watched their English Premier League and Champions League games that season when I happened to see they were on, or if I remember to DVR them, but I didn't plan my schedule around them like I now do. They won the treble that year (2007-2008) - Premier League, FA Cup and Champions League. It was fun winning something, because after all, I had been a Royals fan my entire life, and I sure wasn't winning anything there.

So, it goes without saying that this Sunday's friendly with United is a pretty big deal for me. I'll be attending the game in blue, cheering for the Wizards, but hoping for both teams to put on a good performance and provide the best game possible.

Sure, it's a bit disappointing that stars like Rooney, Evra and Vidic won't be making the trip. And, of course it would be my luck that the year Kansas City happens to land a game like this, it's the same summer as a World Cup. Oh well. Such little things won't possibly ruin it for me. United was the team that first captured my interest into the soccer world as a whole, and I'll always have a spot for their shirts hanging in my closet. For them to be coming to my city, to play my hometown club, literally just two minutes from my house, I can't possibly imagine anything cooler to happen.

A little more about myself, for anyone that cares:

I'm 21 years old and have lived in the Kansas City area my entire life. Specifically, I've lived in Independence, MO my entire life. I went to Truman High School and have spent a bit of time at a couple different colleges. You can find my four days a week loading furniture and tying it down in the back of your truck just across the street from the site Wizards new home - Nebraska Furniture Mart. My shirt actually says, "Andy" on it, so if you ever see me out there, don't hesitate to grab me and introduce yourself. I love awkward moments.

Also, I'm at all Wizards home games and tailgates. I'm the really tall, skinny kid with brownish-reddish hair and the long neck. Chances are I'll also be the first one drunk. I'm a member of the American Outlaws - Kansas City Chapter. They forever changed my life from June 12 to June 26. Experiencing those four US World Cup games with those people, in that atmosphere, is something I'll never forget. I also met some awesome new people whom I still stay in contact with and go to Wizards games with.

Favorite soccer fan moment: Club - Federico Macheda's stoppage time winner against Aston Villa in 2009 and Paul Scholes winning header at Manchester City this past year, just to put them back in their place. Country - If anyone says anything other than Landon Donovan's 91st minute winner against Algeria, they're full of it. I've never seen so much beer fly in my life. Something I still get chills thinking about.