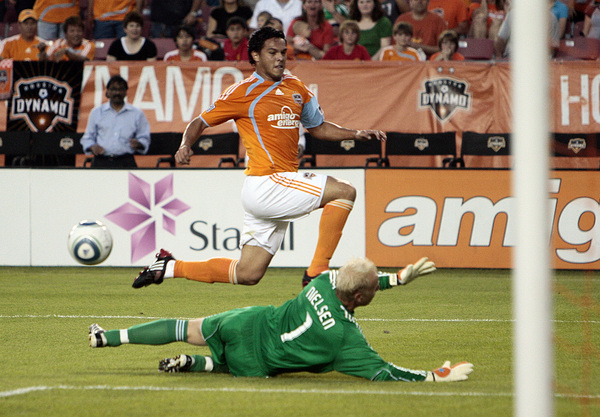 We let Luis Ángel Landín scored on us in the first matchup. #SignsThatThingsAreBAD

After Sunday night's 2-0 road triumph over Chivas USA, the Kansas City Wizards find themselves back in a familiar position. That is, of course, looking up at Seattle Sounders FC, who sit six points clear of Kansas City for the eighth and final MLS Cup playoff spot. The kicker, though, being KC's two games in hand over Seattle.

Wednesday night will see the first of the two games in hand played, when the struggling Houston Dynamo come to town, looking to upset the Wiz's playoff dreams. As they got revenge on Chivas Saturday night, KC will be looking to exact another measure of revenge against a Houston side that showed them out of town with a 3-0 loss back on May 1. (How fitting it was for that disaster of a game to occur on the first of May, as it really was "May Day" for the beloved Wiz.)

Jump forward to the present moment, and Kansas City are one of the hottest teams in MLS - trailing only Saturday's opponent, FC Dallas - in that category. The Wizards have picked up 18 of a possible 27 points in their last nine league games (5-1-3), while Houston have won just a single game (1-8-4) since the beginning of June, and have only three wins (3-11-4) since the two teams' first meeting of the season.

If the Wizards are going to keep this gravy train rolling and track down Seattle in the league standings, they're going to have to make it happen with somewhat of a makeshift starting XI against the Dynamo.

Due to the physical wear three games in seven days entails, look for a slightly modified starting lineup Wednesday night. The middle game of three game stretch is the most logical time to rest your top line players, especially when facing a struggling opponent. (That was my logic for starting Teal Bunbury Sunday night over Birahim Diop. If you must start Diop once in the stretch - and you likely must do so - why not the middle game against the weakest opponent? Things worked out to this point, so I'll leave that be until Saturday night.)

We're going to need the biggest of horses to conquer Dallas on Saturday - a team riding a 15 game unbeaten streak - so here would be my starting XI for the Dynamo matchup:

All unearthly powers that be, help me because yes, I did include Josh Wolff in a desired starting XI for a very meaningful game again. I'm only kidding. Sort of. Wolff has been pretty good coming off the bench in games since losing his starting spot to Bunbury in mid-July. Part of that may be because when coming on late, he knows he doesn't have to pace himself for 90 minutes, and the opposing defenders are more worn down than he, having already played 60, 70, 80 minutes.

My thinking in starting Smith is that he plays 60 minutes, helps create a goal (or three) and he can come off and recoup and be available for selection Saturday. I just can't fathom the anemic levels of creativitiy and flash a Wizards frontline would have without Smith.

Bunbury only played 35 minutes Sunday, so at 20 years old, he should be good for 90 with ease mid-week. I would say go with Teal wide right with Wolff in the center, but he really just struggles and doesn't quite know what to do when playing outside. That's something Kei, and probably Wolff, cope with a lot better.

You now have my desired starters, so now...

I feel like we must have either Auvray or Rocastle in the game at all times, because without either of them, who will have the intestinal fortitude to knock a guy off the ball and take it back? I choose Auvray, because A. he's the better of the two, and B. he's more likely to be fit for selection, given Rocastle's level of fitness. It's probably really coin flip, though, because Rocastle played only 66 minutes against Chivas, while Stephane went the full 90.

Also, I've been somewhat at a loss for why we haven't seen slightly more of Zusi the last couple months. He is routinely one of the more creative and dangerous players on the field, and is such from a midfield position. I see almost no way Vermes leaves him out of the lineup for this one.

Michael Harrington and Roger Espinoza are, as I've said before, the best fullback tandem in the league. We need them on the field at all times. That said, I somewhat expect to see Jonathan Leathers start at Harrington's rightback spot, with either Espinoza in his normal left flank defensive spot, or Harrington being shifted over. I just don't anticipate both playing.

We haven't seen Matt Besler since June 10, and we've yet to see Nick Kounenakis make his debut since signing back on July 18. Because of those two factors, there's no way on God's green earth that Vermes sits both Shavar Thomas and Jimmy Conrad and starts the former pair. Conrad is more likely to be fit than Thomas, and is the better of the two, so I choose him. He gets the (ever-so-unimportant) nod from me.

Oh, and that white-haired guy in goal. I hear he's pretty good. (Despite letting the pudgy Landin in goal earlier this year.)