One Down, Two To Go: Kansas City Wizards Get 2-0 Revenge Over Chivas USA

Share All sharing options for: One Down, Two To Go: Kansas City Wizards Get 2-0 Revenge Over Chivas USA 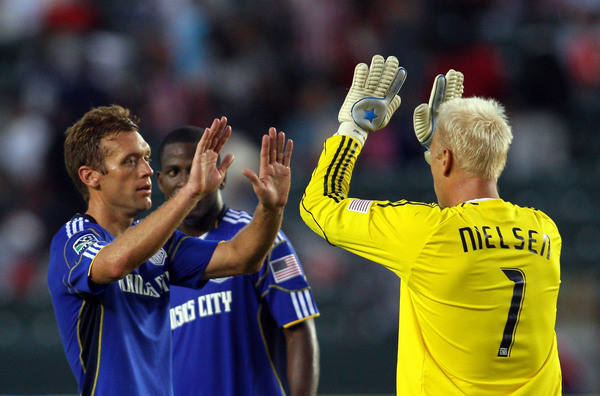 This just in: Jimmy Conrad is still damn good. Ya know, mid-season rough patch aside.

In game one of the Kansas City Wizards' grueling three games in seven days stretch of MLS play, the Wizards got a little revenge for a 2-0 loss at home against Chivas USA back in July. The tables were turned, and the Wizards came out on top this time, to the tune of a familiar 2-0 scoreline at the Home Depot Center in Carson, CA. (Kansas City also beat league-leading LA Galaxy 2-0 at HDC on August 28.)

Some would have been happy with a draw and a road point against the Goats, but in my mind, it had to be the full three possible. Chivas are a side that a playoff team should beat, whether at home or on the road.

Goals by forwards Kei Kamara (9th of the season) and Teal Bunbury (3rd of the season) came inside the final 20 minutes of the match. The game-winner from Kamara in the 70th minute will likely be up for discussion once the season ends, for Wizards goal of the year.* Bunbury's goal, which came in the 83rd, was all the team needed to put the game out of reach and secure a rare road victory. (3rd of the season)

How did the game get to that point when the goals started flowing, and who can we look back on and say were the players most responsible for the early struggles, and the late triumph? Read on and I'm sure to give my thoughts.

* Note: If Landon Donovan wins MLS Goal of the Week this week, (and he probably will) then the next thing you're going to tell me is that we live in America and everyone is in love with him. No chance, right? Even Kamara's header against Real Salt Lake was a better goal than Donovan's header this weekend.

It was very much so a Tale of Two Halves...

For as frustrating as much of the first half was, the team played not so terrible. The backline was nearly impenetrable (that was for pretty much the entire 90 minutes, though) and offered very little work to be done by Jimmy Nielsen. The defending between midfield and the backline was darn near exceptional. At one point during the game, I tweeted the following observation: "Conrad and Auvray had GREAT communication on that Chivas counter.Jimmy called for cover as he was forward, Stephane got their in plenty time"

With the way Stephane Auvray wins balls with such ease, I think he could be a top of the line center half in MLS if he weren't already a top of the line holding mid. The guy just has a knack for getting his foot in at the right time and angle to just yank the ball away from the opponent. I also thought captain Davy Arnaud had a quality first half. He got forward quite a bit - something you want from an attacking midfielder, and something he didn't do enough of early in the season - and gave great support to a struggle center forward spot for 55 minutes.

The disappointment of the first half was Craig Rocastle and his childish actions as the teams headed to the locker rooms for halftime. I fully expected him to continue down the path of "Red Card Craig" from the season's start and get himself sent off in the second half. Luckily, he did not. I suspect someone on the coaching staff had a chat with him, as he was much more relaxed in his final 21 minutes before coming off in the 66th. It was no coincidence this team took off when he stepped his game up and dropped the red card antics. He must, must, must control himself better to be the player we need him to be for hopes of securing that eighth and final playoff spot.

As for the forwards, Ryan Smith was his regular Dance Dance Revolution champion self on the ball, Kamara picked up where he left off before leaving to play with the Sierra Leone national team, and Biarhim Diop? Well, let's just say, "never again, Peter; never again."

I find it hard to believe that many thought we would get the breakthrough goal either from Diop, or while he was still on the field. At least, I know I wasn't expecting it. So, for the first ten minutes of the second half, the midfield kept creating good chances for the forwards, only to make a breakthrough into the middle, where Diop would receive the ball and lack the creativity to produce much more.

Bunbury came on in the 55th minute began causing havoc amongst the Chivas backline within a few minutes. Fortunately, Kei's goal was so good and such a great piece of self-invention, it was likely to happen whether Diop, Bunbury or myself were playing as the third striker.

Michael Harrington, who I actually thought was slightly off his game for only about the second time all year, played the great early ball into the box, Kei flicked it forward with his head, over the defender on his back, made a quick turn around the outside, his eyes never leaving the ball, settled himself under it, took the shot first time with the outside of his right foot and precisely placed it just inside the left post. Goal of the year by a Wizards player, if I'm placing my money on any of them.

Again, the backline was nearly an impermeable matter and did a stellar job of keeping tabs on Chivas forward Justin Braun - one of my keys to the game - and not giving him a golden opportunity on a mistake, as they did twice in the first meeting on July 10.

Before Bunbury's well-earned and hard-fought clincher, I felt pretty good about holding on for the 1-0, but Teal did well to state his case to regain his starting spot by all on his own, fighting off a defender and blasting one high into the corner of Zach Thornton's net.

Man of the Match: Kei Kamara - he had the game-winner, he ran a bajillion miles and his work-rate was through the roof the entire game. Plus, his goal celebration dance with the corner flag, something he says was paying homage to Cameroonian great Roger Milla was a joy to watch.