Share All sharing options for: Weekend Roady: USMNT in Chicago

Put your red, white and blue glasses on for this one.

Now, I'm fully aware that this is a Kansas City Wizards blog. I'm the creator and writer for the thing, in case you haven't noticed. But, I would be willing to bet that of the few readers I've pulled in over the past 24 hours of existence, many of you are just soccer fans in general. I imagine many of you probably watch the Barclays Premier League, La Liga, and maybe even the Bundesliga.

As I have made no secret in that past, I'm relatively new to the world of soccer. Outside of the World Cup in 2002, I had very little exposure to soccer up until 2007. So, naturally this past weekend was my first chance to see the United States national team live and in person. Let's not even talk about my severe lack of travel experienced in this great country of ours.

Needless to say, it was an incredible weekend, and one that I will never forget.

First off, let me start off by just saying that if you are not a member of the American Outlaws, (I assume most of you are, but in the slight chance you're not) you need to find out about them real quick. I may be relatively new to the soccer world, but I have yet to meet such a large, passionate group of supporters. I have been a member since June, and every time I attend an AO function, it gets better than the last.

Making a weekend trip to one of the great American cities to see the national team was no exception.

I don't want to come here and story-tell of tales about a man named Peter climbing a billboard at two in the morning after leaving the AO bar; I don't want to tell of meeting some of the craziest, most passionate, friendliest people I've ever come across; nor do I want to tell of a huge tailgate for just five dollars a piece, where a U-Haul van filled with beer was dispensed. No, I'm not here to sell you on all the perks of a weekend with the American Outlaws.

Rather, this is, in short, what seeing my national team in person, with some of the greatest people I know, meant to me:

Many people would argue that there is nothing that quite compares to supporting the hometown team in the world of sports. So often times, "fans" jump on the bandwagon of big and successful sports teams, like the Yankess, Patriots or Lakers. That's all well and good, but many times, those "fans" are from out of city, out of state, or even out of country. From day one of my sports fan life to last Friday afternoon when I took off from Kansas City International Airport, I would have agreed with them wholeheartedly. That is exactly what I believed.

But, when you meet people from across the country - San Francisco, Boston, Houston, Atlanta, North Carolina - in one central location, coming together for one common goal - to support the US - you can't help but feel a true sense of patriotism and pride in your country.

Being a part of the rising of the world's sport, one of the very few in which the United States don't have a stranglehold on in international competition, in this country makes a person feel like they mean something. I'm from Kansas City, born and bred, and you'll be hard pressed to find a bigger Kansas basketball fan than myself. They were the first team in sports that I truly fell in love with. But, with KU basketball nearing its own brand status, it's not nearly as intimate as the US national team. 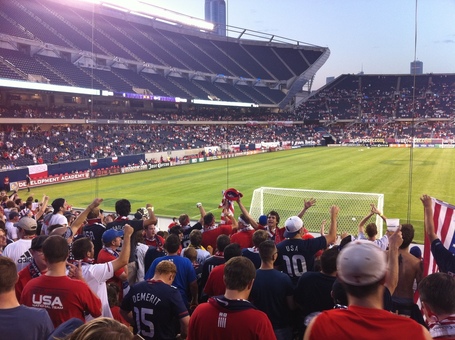 When with people like the American Outlaws, you reailze that while you think you may love your country or your team more than anybody ever could, you're surrounded by hundreds of people who probably do, in fact, love their country and team more than you do. Soccer as a whole is still at the level where it's most followed by the hardcore fans. It's not mainstream, plastered all over SportsCenter year round like the NFL is.

Naturally, not everything can be spick and span, all perfect all the time. The mainstream media has yet to quite grasp the process of the soccer world.

"Why play exhibitions that don't mean anything?" "Why do these fans take it so seriously? It's just soccer." "Real sports don't end in ties."

All common arguments against the game, and all equally frustrating. That's fine, though. For some people, it's just not their cup of tea. One huge problem I do have, however, is when ESPN, the world's largest sporting network and supposed proponent of soccer, can't even get the name of the supporters group that the loudest, most passionate fans belong to. We are the American Outlaws. Our banners say so, our shirts and scarves display it clear as day, and we are official members - dues paid and all.

Proper credit needs to be given where it's due. With all due respect to the men and women that started the US supporters group revolution, Sam's Army is long gone. For John Harkes to repeatedly give credit to a group that is not visibly represented whatsoever inside the stadium, and to shun the name of the real group standing, chanting and singing their hearts out, is a disservice to not only the company he works for and the fans themselves, but the sport of soccer in America.

We take sincere pride in our country and its name. The leaders of the organization work tirelessly, making connections and inroads into the US Soccer Federation to bring the fans one step closer to the players they so fervently support. Hours and hours (and beers and beers) of time go into planning an entire weekend of AO events around a US friendly. Hours of work go into running the events throughout the weekend. Do the right thing and credit those people. We don't go around calling you Ian Darke, regardless that he's ten times the television broadcaster you are.

We are the American Outlaws, and we are here to stay. Don't believe me? Ask our very own Jimmy Conrad.