Can You (Successfully) Rebuild A Defense In An Offseason?

Share All sharing options for: Can You (Successfully) Rebuild A Defense In An Offseason?

On Monday night, I took a look at the standing of goalkeepers and defenders currently on Sporting Kansas City's roster. Following Wednesday's re-entry draft (round one), things have changed once again, so we've got to go back and re-work the depth chart of defenders.

Also, with the steadily growing amount of turnover we are seeing among defenders this offseason already, I hope to tackle the issue of how much experience a Major League Soccer backline needs to have together to be successful. At least, that's the plan, because by the time the season starts in March, the defense will have undergone the most drastic overhaul.

Since the end of the 2010 season, Jonathan Leathers has been selected in the expansion draft by Vancouver Whitecaps, Aaron Hohlbein and Jimmy Conrad's contracts each expired with neither being offered new ones at their current rate. Hohlbein was then selected by Columbus Crew in the first round of the re-entry draft.

As I outlined in Monday's post, I fully expect Michael Harrington and Roger Espinoza to be the starting fullbacks for the 2011 season, barring extenuating circumstances. (i.e. serious injury) If the first game of the 2011 season were played tomorrow, I would expect Shavar Thomas and Matt Besler to be the starting centerbacks; at least out of the players currently under contract, because, well, they're the only two centerbacks under contract.

Basically, we've got a starting backline, plus a whole lot of nothing for depth and backups behind them. Like, literally almost nothing. Korede Aiyegbusi would back up Espinoza, but he's much more likely to fill out the reserve roster in 2011, so that's limited depth. Nikos Kounenakis is (I believe) still under contract, but he'll be 33 by the season opener and is certainly not a part of the club's future plans.

So, where are we going to fill out the roster in our own half of the field? And, can such drastic turnover in defense really work out in season one? You'll find out after the jump.

I believe the first step of rebuilding the defense will come from the reported interest in 24-year old French defender Aurelien Collin. Collin is athletic and looks to have quite a bit of potential to grow into, so he could be a nice piece for the future if he isn't ready to step into a major role in 2011. Because of Besler's experience (36 starts over two seasons), if he has to step into a starting spot to open up next year, I don't have a problem with that. But, eventually I believe Collin will be a key piece of this team, whether it be in year two or halfway through 2011.

(Sidenote: If Besler becomes a more physical defender like head coach Peter Vermes wants, a Besler-Collin pairing in 2012 could join Harrington and Espinoza to form a backline that averages about 24 years of age. That could be a strength for years and years to come.)

Sporting KC Juniors defender Konner Knoll was one of three Juniors players, along with homegrown signing Jon Kempin and yet-to-be-signed forward Jordan Rideout, to join the senior team last summer for a week of practices. Having not seen Knoll play for myself, I hold hope that he will be signed at some point during the 2011 season. Since he would not count against the team's salary cap for a while, it would be a nice to sign at least one homegrown defender to prepare for down the road. Also, we only have so many international slots left.

I would be very surprised if there isn't a homegrown defender signed at some point next season, and since Knoll is the only one that has been talked about with any regularity, I would put my money on him being the one.

Round two of the re-entry draft will take place this coming Wednesday and could provide another option in defense. But, based on the players to be had in the draft, our options are limited. Of the dozen or so defenders available for selection, there are only a couple under the age of 30 - Houston's Ryan Cochrane and Chivas USA's Marcelo Saragosa, who are 27 and 28 respectively.

Neither seems to be a hot target heading into Wednesday, though, because neither one of them played a ton of minutes in 2010 (529 and 863). So, what interest would Vermes have in another team's scrap players when he just let one of his own (Hohlbein) go in the same draft? Don't look for a defender to come of the re-entry draft. If anything, a midfielder is most likely.

Given the fact that, even with counting Collin in (which is by no means a sure thing), we're still only looking at three centerbacks on the roster. There will undoubtedly be more signings to come in that department. At this time, no one has even the slightest clue of who that could be, so we won't waste any time there on speculation.

So, now the question becomes whether or not you can almost completely rebuild a squad's defense (save for a couple players) and have immediate success the following season.

The quickest way to go about determining that, without hours upon hours of charting multiple things, would be to figure up the ratio of goals allowed in 2010 : average number of years (regularly playing) defenders have with that team.

Hypothesis: If a team's regularly playing defenders have more years experience playing together, then they will allow fewer goals scored against them. 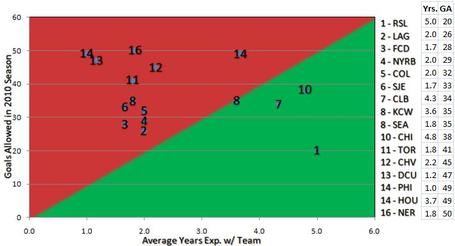 (For larger viewing of the scatter plot, just click it or open it in another tab.)

Conclusion: While it's rather obvious that you would like to have a group of defenders that have played together for multiple seasons, what this test doesn't take into account is the age of players - meaning teams with high averages of experience together could, in fact, just mean that said team has multiple aging defenders whose ability has dropped off with age.

For example, Chicago Fire have the second most tenured group of defenders in the league, but are only middle of the pack in goals allowed in 2010. Or, in Chicago's case, one player (C.J. Brown) could be a 13 year Fire veteran and severely skew the numbers. Admittedly, this is a very simplistic, raw comparison of a couple basic statistics.

One thing that can be positively concluded from this is that, at least in 2010, (and this is an extremely small sample size. It would take all 15 seasons of MLS play to give a truly accurate reflection for comparison.) the "magic number" so to speak, was to have your regularly playing defenders together for (at least) two years, give or take a couple decimal points.

If you look back to the plot, there are six teams all hovering around the two year mark with 35 goals or fewer allowed in 2010. Those six teams comprise six of the eight playoff qualifiers, including the eventual champions Colorado Rapids.

Of the two teams sitting on the wrong side of even just a year and a half average - DC United and Philadelphia Union - they allowed 47 and 49 goals, respectively. That's a dozen more than KC, which would be worth just over 11 points in the standings at KC's points earned per goal allowed rate. That difference would drop them from 9th to second to bottom in the league. There's a direct correlation where the experience together factored directly into the league standings.

Would you have guessed it that Kansas City would sit more favorably compared to the rest of the teams in the league? Dead center in goals allowed with the fifth highest level of team experience. From that, we can deduce something that we already know, but now have statistical backing for - the defense should have been better in 2010.

Luckily, team president Robb Heineman knows this, has time and time again said so, and has every intention of fixing it.

(Final) Bonus fun fact: Harrington, Thomas, Besler and Espinoza have a combined average of 2.5 years with the team. Even minus Jimmy, they're still slightly above average compared to the rest of the league.