Way back on November 10, Thad Bell from The Back Post let out an interview with Sporting Kansas City president Robb Heineman where Heineman claimed that the front office had "kind of got the first offseason player kind of wrapped up." At the tail end of that interview, Heineman also let out that the player was from France.

The Daily Wiz now believes (and, has for some time now) that Sporting KC has set their sights on 24-year old French defender Aurelien Collin, currently of Vitória Futebol Clube in the Portuguese first division. It is not yet known whether a final deal has been agreed upon.

After some fairly extensive research on Collin, I can offer the following information:

Standing at about 6'1" and 169 pounds, Collin is currently a centerback/rightback hybrid. (Think a few inches and a few pounds bigger than Jonathan Leathers.)

On the season, Collin has appeared in ten of his club's twelve leagues games, including eight as a starter. Collin has been a part of three clean sheets on the season, and the club has a record of 3-5-2 when he has appeared. But, of late Vitória have hit a rough patch of form, picking up only one point from their last four league games. They have fallen to 15th place in the 18 team league.

Collin joined Vitória just before the start of the 2009 season that August. He went on to score the first three goals of his professionally documented career and tally one assist, all done while starting 20 of the club's 34 league games in the '09 campaign. He made his Vitória debut in the ninth game of the season, meaning once he was given opportunity to play, he started 20 of 25 games from the point forward.

Going back further, he spent half a season in early 2009 with English Conference club Wrexham. The 2007 and 2008 season were spent with Gretna in the Scottish Premier League, where he was quite adored by the fans of the club. Between his time at Gretna and Wrexham, there were trials with Championship clubs Blackpool, Preston North End and Wolves. Suffice it to say that Collin has been around the block a bit, and could do for a more permanent home.

It seems as though he is finally in that sort of situation now with Vitória, but reports this week out of Portugal are that he has been placed on the market by the club and they are looking to move him. Collin joined Vitória on a free transfer and signed a two year deal before '09, so with only half a season left on his contract, there would likely be only a very small transfer fee to be paid out, if any at all. 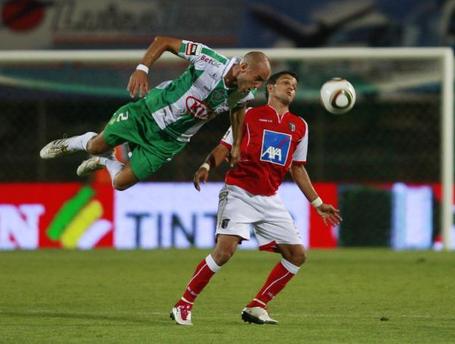 As for how Collin fits into the current SKC roster, in my mind, it depends heavily on what kind of role head coach Peter Vermes envisions defender Shavar Thomas occupying in 2011. If Vermes wants to stick with Thomas as one half of the center of defense, (and I would be more than okay with that) then the second centerback has to be of a far more athletic skill set than Thomas, or even 2010 partner Jimmy Conrad. Given that he spends a good portion of his time at centerback for Vitória and doubles as a rightback, I think Collin fits that mold.

I was able to dig up some recent videos of Collin's game play, that actually show nothing but his involvement in on the ball matters. You can take a look for yourself here.

What I gather from watching each of those videos multiple times each is this: despite the fact that he's on the smaller side of centerbacks in Major League Soccer, Collin defends very aggressively, (within control) especially aerially. He is not afraid to leave the ground to go up and win the ball. Nor does he shy away from going to ground to win the ball with a sweeping slide tackle. That tenacity seems like it would translate to the much more physical playing style of MLS, compared to Portuguese Liga.

It is very unlikely that he is being looked at to play the rightback spot. Michael Harrington had an excellent season in that role in 2010, and likely received a sizeable pay raise this past week based upon the "bona fide" offer rules surrounding contract options and the re-entry draft. It's certainly possible that Collin could be squad depth, but he's one player that I would like to see in doses early on in 2011. As I said, a Thomas-Collin centerback partnership would be more ideal than Thomas-Conrad.

Regardless, though, of where Collin will fit into the team or even how good he really is, the fact that Heineman and coaches are going after players of this age, rather than 30-plus washed-up guys looking for one more pay day, that excites me about where this club is going more than anything.