Pregame Coverage
Talkin' Touches Podcast- Andy Edwards and Andrew Wiebe break down the Chivas/ Sporting 2-2 draw, and what to expect against New York.

Win and you're in. That's pretty much the deal for Sporting Kansas City when they take on the New York Red Bulls tomorrow at 3PM CDT.

Enough with all of the hypothetical situations that could play out regarding other teams in the Eastern Conference. If Kansas City can take care of business against a talented New York team, than Sporting will have made their own way into the 2011 MLS Playoffs. No help needed.

Of course, Sporting just might be facing New York at the worst time. The Red Bulls are coming off an impressive performance, defeating the LA Galaxy 2-0 at Red Bull Arena October 4th. True, the Galaxy were without Landon Donovan, and Robbie Keane, but all signs point towards a reinvigorated Red Bulls squad.

After the team sold MVP candidate Dwayne De Rosario earlier this season. After the Rafa Marquez incident. After most people thought head coach Hans Backe had surely lost his team. After everything that has been one collective headache for New York fans, the Red Bulls have somehow still found a way to position themselves for a playoff run.

At the forefront of the minds of the Sporting players will be the problem of containing Thierry Henry, and Luke Rodgers; the Red Bulls' top scorers who have combined for 23 goals.

Henry has been in the MLS MVP race throughout much of the 2011 season, scoring 14 goals, and coming up big for New York when they need him the most (see the October 1st match against Toronto FC).

Rodgers hasn't been too shabby himself. The Englishman has found the back of the net 9 times in 21 total games played. In fact, Rodgers has played so well, he's been able to keep U.S. wonderkid Juan Agudelo (6 goals) regulated to the bench as of late.

With midfielders Joel Lindpere, and Dane Richards chipping in 7, and 6 goals, respectively, one thing is made perfectly clear; New York can score with the best of them (they trail only Seattle for most goals scored this season). Which is why the Sporting Kansas City defense will have to be at the top of their game Saturday night if they want to solidify Sporting's spot in the playoffs.

One the good news front, New York's defense hasn't exactly been rock solid as they've conceded 42 goals this season. Tim Ream has regressed from his promising rookie year in 2010. Rafa Marquez's run of sub-par play has been well documented this season, especially after he called out his teammates for not being up to his level.

So it appears the opportunities could be their for Sporting Kansas City. The question will be whether Sporting will be able to capitalize on their chances. It's been a problem for the team for much of the season. Saturday is a game in which Sporting will probably have to score multiple goals if they want to come away with three points. 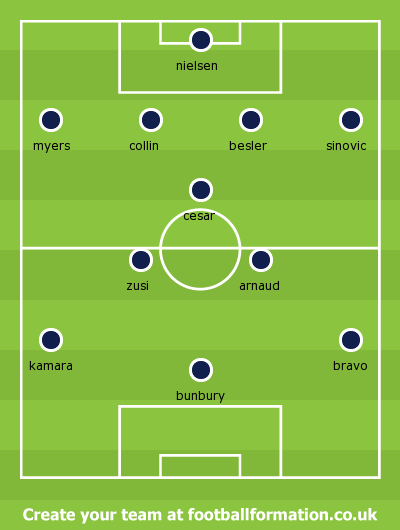 Since I'm determined to actually guess a Sporting Kansas City line up correctly before the season is over, I'm going with Teal Bunbury at the center forward position. If it were up to me, C.J. Sapong would start, but I think Vermes will start Teal, hoping he will  be able to find space behind a questionable New York defense.