Sporting Kansas City: The Beginning of Something Great

Share All sharing options for: Sporting Kansas City: The Beginning of Something Great 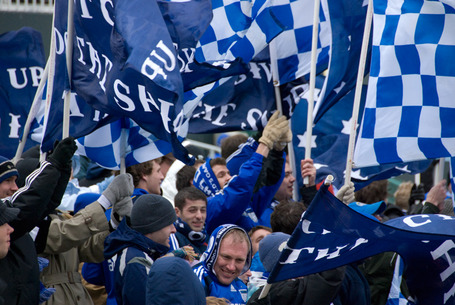 With tears on our scarves, Sporting Kansas City fans wept when the Houston Dynamo knocked us out of the playoffs. There were no excuses; we were just simply outplayed in our home stadium.

It’s really hard to think of the positives after coming so close to the glory of the MLS Cup, then failing. However, the positives are to be found, and they are in you.

It’s been a long time since a team in Kansas City has had any shot moving forward in the playoffs. Sure, the Kansas City Chiefs made it last year, but did really ever have a chance?

We all know the historical badness of the Kansas City Royals, so no playoffs from our baseball team either.

Then we have Sporting Kansas City. The team gave Kansas City something it has been longing for since the heydays of the Chiefs and the Royals.

After wallowing in last place for the first part of the season, Sporting turned alive when LiveSTRONG Sporting Park opened, making its way up the standings and ending up in first place in the Eastern Conference.

That’s where the magic was: LiveSTRONG Sporting Park.

If given a good team, Kansas Citians will flock to the stadium, filling it with their unique brand of fandom. Take a look at the Chiefs last year. Since they were a first place team, the stadium was packed, loud, and rambunctious.

The case was the same with Sporting Kansas City.

However, this year’s Sporting Kansas City team was different then all of the recent Kansas City playoff teams. They became good at an absolutely crucial time for Kansas City sports.

Since Kansas City has been longing for a championship team for so long, they came in packs to LiveSTRONG to watch Sporting in the playoffs. It garnered attention from the local media, therefore garnering attention from the rest of the general public.

In a time when Kansas City has been in a contender drought, Sporting was able to step up and deliver a good team when Kansas City so desperately wanted one. Even though they lost, the attention from the people who maybe weren’t that interested in soccer can only be counted as a win.

Sporting Kansas City and soccer will become more popular in Kansas City because of Sporting being able to step up and deliver a winner during a playoff drought. The fans gave us a preview during the playoff games of just what is going to come from this club in terms of a fan base.

This is just the beginning of a soccer renaissance in Kansas City. The team is young and talented, the owners are committed to winning, and the fans are lined up and ready to chant. Kansas City already had some of the best fans, but this season and the playoff run will give Sporting an extra boost when it comes to fan attendance and atmosphere.

The future is bright for Kansas City. Both the Royals and Chiefs are building up step-by-step, but Sporting already has the advantage of being there. Now we are just waiting for a championship.