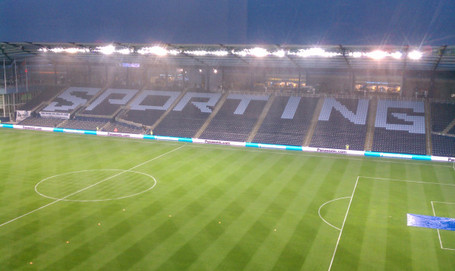 Looks like it's going to be a rainy one tonight at LIVESTRONG Sporting Park.
Photo courtesy of Zachary Cobb

Sporting Kansas City are set to take on the Colorado Rapids in the second leg of a two game series.

Sporting KC hold a 2 goal aggregate lead over Colorado, but I still expect Sporting KC head coach to have his team coming out looking to put Colorado away early.

Andy Edwards tweeted earlier today that Vermes has listed forward Omar Bravo as doubtful for tonight's game. Holding Bravo out of tonight's game might not be the worst thing for the team. The extra game off will give Bravo time to completely heal, and be ready for a potential Eastern Conference final match on Sunday, provided Sporting KC can take care of business tonight.

With that being said, it looks like we'll see the same lineup Vermes used in the first leg on Sunday.

If you weren't lucky enough to make it out to LIVESTRONG tonight, feel free to join in the conversation here at SB Nation.

Tonight's lineups are after the jump...

Question of the Day: What's the over/under on number of Julio Cesar attempted slide tackles tonight? The man's a master of two things; the through ball, and the slide tackle.