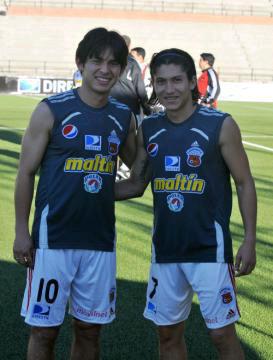 It appears Sporting Kansas City were after the signature of Venezuelan forward Jesus Gomez (left).
Photo courtesy of Caracas FC

Jesus Gomez turned down an offer of Bolivia Bolivar and Kansas City MLS to play for Caracas FC, are finalizing negotiations.

That particular facebook post was dated December 16th. A few days later, on the 19th, Caracas FC confirmed that Gomez had come to an agreement with the club and had officially signed until 2013.

I realize that this is the "silly" season for rumors and such, but I feel that there is probably some truth to Caracas' claims that Sporting were at least in contact with Gomez and that they had probably made him an offer, given the fact that Caracas FC actually mentioned Kansas City MLS and Bolivia Bolivar (I'm assuming this is Club Bolivar from the Bolivian Professional Football League) on their facebook page as the other two teams wanting Gomez's signature.

Honestly, this is the first I have heard or read about the 27 year old forward, so at the moment, I don't have much information on him, other than what is offered on his wikipedia page (and we all know how accurate those can be), but apparently he is known as "la pulga" in Venezuela which translates to "the flea." So...there's that.