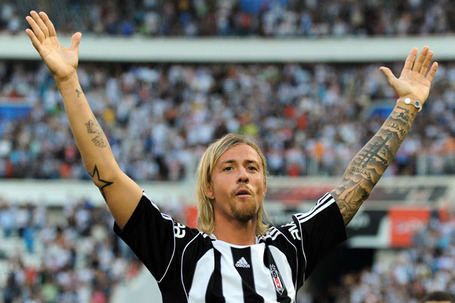 My "Guti to Sporting KC" prediction is dying faster than Sonny Corleone but I'm still holding out hope.
(Photo courtesy of nationalturk.com)

As most of you probably already know, I'm a big fan of off season transfer talk. Yes, I realize that probably around 98% of these rumors are unfounded and untrue, but still, sometimes it's fun to speculate.

A while back, when word was out that Sporting Kansas City were after a Spanish designated player, I took a stab at who the potential D.P. might be. My guess at the time? Former Real Madrid star Guti Hernandez, who spent the majority of the last couple of years with Turkish club, Besiktas.*

*Herandez and Besiktas have since decided to mutually part ways, as the club has terminated his contract. At the moment, Guti remains without a club.

I was basing that opinion on a few factors: 1) Hernandez would provide veteran leadership as a player who's played the majority of his career on one of the biggest teams in soccer history (Madrid), 2)Sporting KC's need for a playmaking third midfielder to team up with Graham Zusi and Julio Cesar in the team's 4-3-3 formation, and 3) the fact that he is...well....a Spaniard.

Yup... that's basically how I came to my conclusion, and while it looks like there's a pretty darn good chance that I'm completely wrong about my Guti prediction, at least I can hold on to the dream for just a little bit longer.

According to ESPN, Hernandez has expressed an interest in joining Major League Soccer for the 2012 season. Via said ESPN article, Hernandez had this to say in a radio interview about his next footballing destination:

"Initially, I wanted to play in China, another option would be an Arab team in Qatar and also specifically look at going to America."

Imagine me making a face like Jim Carrey's Lloyd Christmas character from the movie "Dumb & Dumber" when I say, "So.... you're tellin' me there's a chance?"

I know, I know. Realistically, the LA Galaxy would have to be the front runners for Hernandez's services. After all, I think the chances of David Beckham returning to MLS aren't that great at the moment, as French side PSG are apparently wiling to pay ol' Golden Balls a healthy ransom to leave LA, so LA could have a legitimate need for a midfield play maker.

And from what I've been able to gather about Guti, the type of lifestyle LA affords would appear to be a complete match for Hernandez's night life ventures.

I did find it interesting that he has made a point to say that he has no desire to play in Europe or in any of the Spanish leagues, which obviously increases the chance that MLS is a likely destination for the 35 year old. The talk right after Guti was released from Besiktas was that Hernandez was considering a return to Real Madrid in some sort of capacity, although at this point in his career, it would probably have to be merely as a role player.

Anyways, we'll all find out soon enough just who exactly Sporting's potential designated player signing will be, as the transfer window opens in January. Until then, I'll continue to ride out the small glimmer of hope known only as the"Guti Pipe Dream."