Stephane Auvray Is The Key To Sporting KC's Success

Share All sharing options for: Stephane Auvray Is The Key To Sporting KC's Success

The emphasis of the Sporting Kansas City off season has been centered around finding creative attackers that can finish. Omar Bravo should come in and make an immediate impact, and the likes of C.J. Sapong and Adda Djeziri are very intriguing. However, the most important player and position for Kansas City this season will be Stephane Auvray in the deep-lying central midfield position.

Auvray has come under criticism that he just isn't skillful enough to justify a guaranteed inclusion to the starting eleven. Claude Makelele, who made this role famous was hit with the same critics from President Florentino Perez when he was sold to Chelsea. "We will not miss Makelele. His technique is average, he lacks the speed and skill to take the ball past opponents, and ninety percent of his distribution either goes backwards or sideways. He wasn't a header of the ball and he rarely passed the ball more than three metres."

While Auvray is not close to the caliber of player Makelele is, he brings the same skill set to Sporting's midfield. In the "Makelele role," Auvray is expected to win the ball back, and always be available as an outlet for a teammate's pass.

The majority of MLS teams prefer a direct approach due to the lack of creativity around the league; counter attacking when possible and crossing once play is held up in the final third.  Last season, the Wizards went away from this model and Peter Vermes introduced a system unique to MLS. He attempted to mimic the possession game made famous by Barcelona in La Liga and Arsenal in the Premier League. Their systems revolve around controlling the midfield while the fullbacks bomb forward to support the attack. While dangerous offensively, this leaves the team vulnerable to counter attacks. 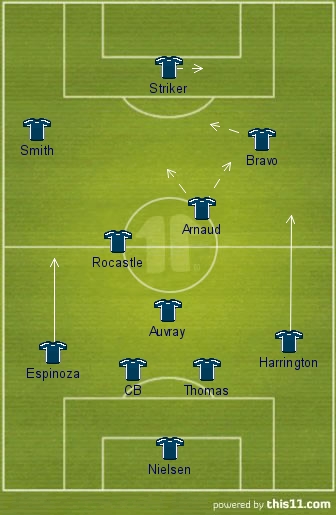 While starting out as a standard 4-3-3, the formation is quite fluid. Omar Bravo will have the freedom to float to the ball. Davy Arnaud will make late runs into the box to support the front line. Michael Harrington is going to be immensely important in the attack. Without a true right winger, he is going to have a lot of space to go forward. Roger Espinoza will make similar runs down the left, but with Ryan Smith staying out wide the majority of time, there aren’t quite as many opportunities. This working will hinge on Auvray’s ability to win the ball and feed it back to the playmakers or else this entire system fails.

The success of Sporting KC will rely on their ability to retain possession. Without the ball, Kansas City will be very poor. Of the ten outfield players, only four can be seen as defensive: the two centerbacks, Rocastle, and Auvray. While Roger Espinoza and Michael Harrington made defensive strides last year, they are still offensive minded fullbacks. Their strengths are nullified if they have to defend too often. On paper, Sporting appear to have a potent attack, but inevitably, it will break down. It will be Auvray's job to break up play and slow the other team down. Ideally, he will stop opposing attacks before they start.

Auvray will surely not win too many man-of-the-match awards in 2011, but he will be an integral part of any success that Kansas City have. For Vermes' system to work, Kansas City will have to control the game in midfield and the rest of the team is going to have to have the confidence that losing the ball will not lead to an easy opponent goal.