Why Davy Arnaud Was Right About Sporting KC And The 2011 MLS Cup: Part 2

Share All sharing options for: Why Davy Arnaud Was Right About Sporting KC And The 2011 MLS Cup: Part 2

The second of a three-part series. Davy Arnaud believes that we are going on a deep posteason run in 2011. Rather than disagree with El Capitán, I'm merely putting thoughtful backing to that belief.

On Wednesday, we took a fairly in-depth look at the change in the Sporting Kansas City roster from opening day 2010 to that of present day. It was pretty astounding to see how many players from that day's gameday eighteen that have either left the team (6), been supplanted in the starting lineup (2 more), or are in the midst of a serious battle for their place in the starting lineup or on the bench (another 2-4 guys). I believe that not only the amount of competition taking place now will greatly benefit the team in 2011, but more so it will be the quality of competition that will raise the bar for everyone on the roster, from player number one all the way down to thirty.

We've already seen the results of such competition in preseason training, with the early dismissal of someone that many expected to contribute at some point in 2011 - second round SuperDraft pick defender J.T. Murray. Murray was expected to compete to fill in for starting leftback Roger Espinoza, should he be called into the Honduran national team for the CONCACAF Gold Cup this June. Either Murray didn't live up to expectations, or someone like, perhaps, Korede Aiyegbusi has impressed to the point of warranting consideration for the job.

Either way, the competition is fierce and evident. That part will take care of itself, as it always does. So, the second factor that leads me to expect a successful (see: winning in the playoffs) season is something completely out of the team and the players' hands; something that everyone else in the league must deal with, too, but in my mind, sets up near perfectly for Sporting KC, and should play right into their hands.

What that is, right after the jump...

Now, before anyone gets all out of whack with the "the league just wants New York and LA to win" conspiracy theory (not that I'd call it such, myself), that's not what I mean. It's not so much the league itself working in Sporting's favor, but the way it has been set up for the 2011 season.

While we don't yet know the structure of the 2011 MLS Cup playoffs (that's kind of important, don't ya think, MLS?), we do know that 10 of the 18 teams will qualify for said playoffs. That's up two places from last year's eight. Sure, the league grew by two, but by that logic, with exactly half the league qualifying last year (8 of 16), you would only add one additional playoff spot. Obviously, that woudn't make sense, so alas, we have two more spots.

The Wizards finished in 9th place in 2010, missing the final playoff spot by just one place and seven points in the league standings. Based upon that alone, they would have made it in 2011 under the assumption that they had failed to improve at all and were only equal to last year's squad. As we've discussed, though, that is not the case, and many expect a substantial improvement in quality this year. This year's team will be better than last year.

Based on conversations with other bloggers that seem to have a grasp on things in Major League Soccer, and the fact that it actually makes a bit of sense, (so then, I fully expect the league to ignore it) the playoff structure could* include "play-in" matchups between the 7 and 10 seeds, and the 8 and 9 seeds, with the lowest remaining seed playing the number one, and the highest remaining seed playing the number two overall seeds, respectively. Think of how the NCAA Tournament has done with basketball with the play-in game for the right to be slaughtered by the number one overall seed in the country. 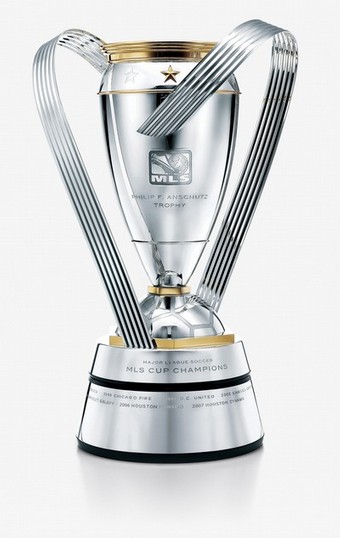 With that in mind, the goal should be a top-six place in the standings to avoid a play-in situation similar to the one outlined above.

Given Sporting's schedule situation - you know, the one where they begin the season with ten games on the road before opening their brand new palacial soccer-specific stadium - a top-six finish over the 34 game regular season could be a bit of a tall task. Granted, every team in the league plays the exact same schedule sans themselves, but by late April and all of May when tough away clashes against the likes of New York, LA, Seattle and Colorado consecutively roll around, don't be surprised to see a bit of a mini-skid leading into the home opener on June 9 against Chicago.

I've kicked the numbers around in my head prior to the release of the schedule and seeing who the road trip would include, and always thought that a number between 12 and 16 would be the necessary number of points to pick up from the first ten games. After seeing the schedule and having a look-see at the back end of that trip, 10 from the first six games looks ideal, and maybe somehow steal a couple more on away draws against the tougher teams. On the record, put me down for 11 being what we take to start the season on the road.

When Los Angeles Galaxy endured a similar season opening road trip in 2003 while awaiting the completion of their current home, the Home Depot Center, they managed only 4 points from 8 games; half a point a game. With the league only home to 10 teams that season, that was a recoverable start. (They actually made the playoffs as the 8th and final seed.) But, if SKC are to go half a point a game to start 2011, (5 points from 10 games) it's all over. We'll be looking at a crawl back from death similar to 2010.

Would we like to finish the regular season in, say, 4th and sit comfortably at home while other teams duke it out for a right to advance to the quarterfinals of MLS Cup? Sure, but it's going to take a ton of work and a little bit of luck along the way. For now, let's just focus on securing a spot in the playoffs by late September or early October, hold down a spot from 6 to 8, and just get in the tournament.

Because, as we've all seen, once you get into those playoffs, anything can happen. Just ask your 2010 MLS Cup champion Colorado Rapids.

So, what say you? Do you agree with Davy thus far? Do you see Sporting making that fairy tale run in the 2011 playoffs? Or, is this just a Sporting blue glasses-wearing blogger sipping too much of the blue Kool-Aid?