What Does Teal Bunbury's Dislocated Elbow Mean For Sporting KC?

Share All sharing options for: What Does Teal Bunbury's Dislocated Elbow Mean For Sporting KC?

While Sporting Kansas City fell today 3-1 today in a preseason scrimmage against the Houston Dynamo, the more pressing concern is that striker Teal Bunbury went down with a dislocated elbow. The initial speculation saw him out for 4-6 weeks or longer, but the club has come out and said Bunbury will only miss 2-4 weeks. If everything goes as expected, Teal should be good to go for the opener. However, the team must be ready to play without him if a setback occurs or he isn't match fit to start the season.

Let's take a look at how the loss of Teal Bunbury would change the attack. Take the jump.

The striker position has been the subject of many debates amongst SKC fans. My opinion is that Vermes plans to start Kei Kamara and have Bunbury be that dynamic player off the bench. While that could change for the first couple games of the year, the team shouldn't hurt all that much. For a team that scored very few goals last year, Sporting KC have plenty of attacking options. Bunbury, Kamara, Omar Bravo, Birahim Diop,  C.J. Sapong and Davy Arnaud are all capable of leading the line. Without Teal, I expect Kamara to start with Smith and Bravo on the wings. 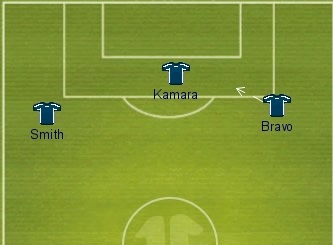 In late situations where a goal is needed, Arnaud could push forward 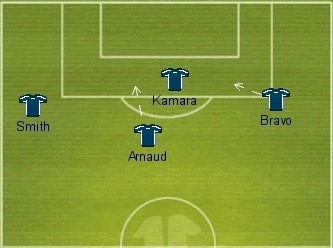 ...or Bravo will become a true second striker with a late sub taking over the right wing position. It is still to be seen who becomes second choice on the right flank. Chance Myers has been given a look there in the past with mixed results. Sapong is talented, but raw, so I doubt he will be thrown out there so early in the season. If the hype is legitimate, I'd like to see Adda Djeziri grab it. 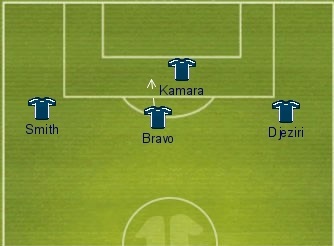 While losing Teal Bunbury certainly isn't ideal, I believe SKC would have no problem dealing with his absence for the short term.