Share All sharing options for: PHOTOS: Livestrong Sporting Park - Under The Bright Lights

Also file under: Learning something new about building stadiums; this is for you, Houston and San Jose.

Being the extreme Livestrong Sporting Park geek that I am, and having the pleasure of seeing the beautiful, brand-new, still under construction stadium a handful of times each and every week, I've probably taken no less than 200 pictures of the stadium over the last calendar year. It all started last March when I get a brand new smartphone with a great camera. Up until that point, I hadn't really missed out on much, as the happenings at the stadium site was mostly just a lot of digging giant holes in the ground.

Over that time, I've managed to capture a few pretty cool shots of Sporting Kansas City's soon-to-be new home stage. I've managed to shoot the building with a colorful sunset in the background, clouds aglow with light rays from the sun sitting high above in the background; I've got pictures of nearly every stage of the growing process, from one short level on the west side, all the way up until two days ago. It's just what I do.

So, having seen the stadium no less than a couple hundred times, imagine the surprised look upon my face Tuesday night while leaving work across the street from the stadium, when a single bay of the stadium's lights in the southwest corner were on hours after the sun had disappeared. I've been inside a handful of stadiums before - Kauffman Stadium, Arrowhead Stadium, CommunityAmerica Ballpark, etc. - so it's not like I'd never seen bright lights before. But this time, I slammed on the brakes, stopped and stared, all while nearly getting rear-ended leaving the parking lot.

What I saw was something I never thought a camera could ever fully capture with due justice; surely, a picture that will live in my mind for the rest of my life. And, it was just one corner of the stadium's lights that were turned on.

It was strange to me that the lights were left on overnight, seeing as how there were no workers working through the night, and obviously the first game in the stadium is still three months away. So, I did a little research. Turns out that our precious little jewel in Village West, Kansas City, KS has grown up so much that her lights are now undergoing what is known as the "burn-in process."

Anyway, a little bit about burning in lights and the really cool pictures that were the cause for this entire post, after the jump...

From the Orange County Register, December 2009, after the Anaheim Angels had replaced their stadium's lights with new bulbs:

The stadium lights were turned on Tuesday morning and will continue to run constantly – even while no events are happening inside the stadium – until they are turned off again Saturday night.

The 'round-the-clock light show, which prompted some phone calls from curious residents who live near the stadium, is part of a rare change-out of all 600 bulbs that illuminate the field at Angel Stadium – or as the lighting technicians call it: a "mass re-lamp," Angels spokesman Tim Mead said.

The lights must remain on for 100 hours straight to burn to the proper "color temperature," he said.

The 2,000-watt bulbs inside the stadium light standards start out burning with a green tint and slowly fade into a hue that is best for baseball and football games.

So, that explains that. Isn't it wild that our little baby is all grown up now? The photos honestly don't even look real; they look so illuminated and exaggerated by the bright lights. 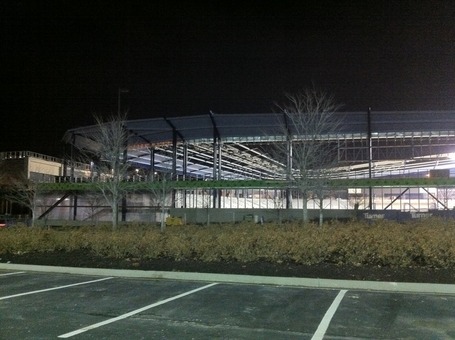 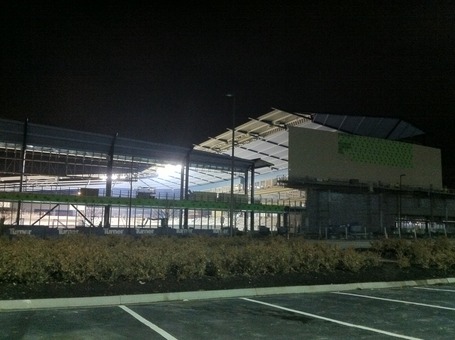 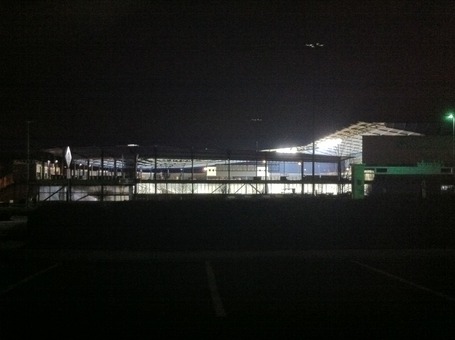 From the north, the entire beauty that is Livestrong Sporting Park