Sporting Kansas City's injury problems were again an issue coming into Saturday's game against the Chicago Fire. Kei Kamara and Shavar Thomas were also out as they were on leave for international duty.

Milos Stojcev started the game on the right wing for Kamara, which put Stephane Auvray at one of the holding midfield spots along with Craig Rocastle. Luke Sassano was nursing an injury so Chance Myers played right back. Julio Cesar Santos did not recover in time from a leg laceration so Roger Espinoza had to play as emergency left center back with Scott Lorenz making his MLS debut at left back.

Kansas City played their customary 4-3-3. With Kei Kamara not with the team, the team lacked width on either side of CJ Sapong. The team had to to rely on Myers and Lorenz to make forward runs. Arnaud and Stojcev routinely shifted between the right and center of the pitch.

Chicago on the other hand were far more complex. Defensively, the lineup was a very normal 4-4-2, but as soon as the ball was won, the team shifted to a 3-5-2. Marco Pappa shifted inside from his left midfield position to act like an attacking midfielder/withdrawn forward. Gonzalo Cegares, the left back, took over at left midfield. While in possession, the back line of Jalili Anibaba, Josip Mikulic and Cory Gibbs shifted centrally.

Both teams struggle to retain possession

As one would suspect with a 4-3-3 v 3-5-2 matchup, there was a lot of congestion in the midfield. Neither could string passes together to get around the opposing high lines. This turned into an exchange of lob balls between the teams. However, it was very apparent early on that Chicago's forwards were going to give Kansas City's makeshift back line problems. Strikers Diego Chavez and Gaston Puerari seemed to have an inherent understanding of each other's movement.

What looked to be a very good opportunity for Kansas City to get the opener turned into a nightmare. Sean Johnson sprung a counter attack off of an Omar Bravo free kick. A long ball over the defense saw Puerari get behind the defense. Bravo nudged him in the box, which caused a theatrical sprawl, enough for referee, Jason Anoo, to call a PK and hand the Mexican International a red card. Kansas City looked quite flustered after losing a man, and it took 10 minutes for the Fire to grab another.

Kansas City seemed uncertain what their roles were after the Bravo red card.  The team seemed to settle after half time when technical director/head coach Peter Vermes substituted Teal Bunbury for Auvray.  Stojcev flipped wings with Bunbury taking over the right (though he and Sapong did swap throughout). Davy Arnaud took more of a box to box midfield role. 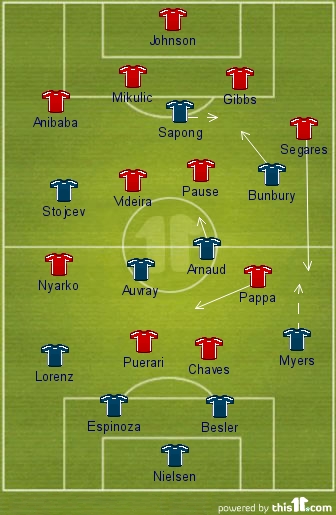 Although down a man, Sporting took a large spell of the possession to open up the 2nd half. Teal Bunbury made an instant impact when he and Sapong traded a 1-2 at the top of Chicago's box which led to a shot on goal. Two corners later, Arnaud put a short corner into the box which was mishandled by goalkeeper Sean Johnson. Matt Besler put the bobble into an open net to bring Kansas City within one.

Marco Pappa key to the game

SKC could not handle Marco Pappa's movement and creativity. His linking with the two strikers and left back/midfielder Gonzalo Segares was very good. With his movement from the left to a more central position, Chance Myers and Matt Besler seemed unsure on how to defend him. Too often both players stepped up leaving the rest of the line exposed. This is what led to Chicago's second goal.

Pappa was an expert at finding pockets of space between KC's holding midfielders and the backline. His play steadily built up to a moment of brilliance for Chicago's third goal when he maneuvered through 4 Sporting defenders to put a far post shot passed Jimmy Nielsen.

Once down two goals again, KC pressed again. Graham Zusi came on for Auvray in an attempt to make the team more offensive. The pressure applied led to a goal for Teal Bunbury when he intercepted a back pass to score his first of the season.

This game should have been over when Kansas City went down to 10 men on what was a very questionable red card to Omar Bravo, but the team's determination almost got them a point.

The difference in styles were quite apparent. Chicago looked to be finesse and creative while Kansas City prefer the athletic and physical game. All 5 goals were a result of these differing styles. While Chicago took the three points, its unfair to say that they were the better team. Even with a man down, Kansas City proved to be dangerous.