What Is Sporting KC's Strongest XI?

Share All sharing options for: What Is Sporting KC's Strongest XI?

It is no secret that Sporting Kansas City have been struggling. The offense which started off very strong has stuttered the past three games, scoring only one goal from open play. For me, the problem is the lack of creativity in the lineup without Omar Bravo. Teams have realized that Sporting KC are overly reliant on their speed on counter attacks and have bunkered down.

Without being able to take advantage of space behind the opposition's backline, Sporting have had a very hard time getting scoring opportunities. Luckily, Bravo is close to coming back, and he, along with Ryan Smith, will bring a needed spark to the team to break down defenses that park the bus.

I would like to see Kansas City use a slight change in formation and personnel in order to get both Bravo and Smith into the lineup. From a basic 4-3-3, I'd like to see the attacking midfielder become a second striker to form a 4-2-3-1. 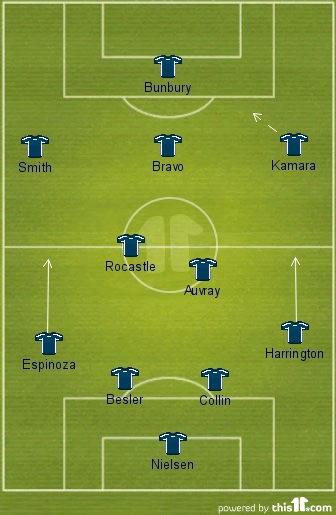 In this formation, Omar Bravo would be playing very similar to a classic #10. Playing in the center of the pitch will allow him to link up in most attacks, and then make runs toward goal when he sees fit. Including Ryan Smith in the squad is a must for me. He brings a different skill set to the team that no one else possesses. He will suck defenders to him which opens up space for the rest of the team to take advantage of. Kei Kamara stays in at his right midfield/wing position. He works hard offensively and tracks back to support the defense.

I believe this switch will help ease Teal Bunbury's frustration. He has had a tough time getting involved in the game, having been isolated because of the lack of midfield support. Smith and Bravo will get him the ball in goal scoring positions.

One of the biggest changes many Sporting KC fans will notice is that Davy Arnaud is not in the starting XI. While the first MLS Castrol ratings rate him as the team's most effective player so far this season, his skill set is not as important in this lineup.  Arnaud is a high energy player that will give it his all. He does not have the creativity to break down opposition defenses and he isn't the best on the team at breaking up attacks. In order to get Kansas City's strongest attack into the game, I feel that two holding midfielders are needed to bring a balance to the lineup.

Stephane Auvray has been a very polarizing figure on the team so far. Some people love him, while others don't understand what he brings to the team. He is one of the first players I put into the team sheet. While Auvray is one of the worst offensive players on the team, it's the dirty work he does that makes him an asset. He breaks up attacks before they happen and while he rarely makes "the killer pass," he is decent at getting rid of the ball to the players around him. I believe he and Craig Rocastle form a very nice tandem.  The idea is that Auvray wins the ball, and then Rocastle can act as the pivot between the defense and attack. He is a nice passer of the ball and can pick out players in dangerous positions.

It's well known that Roger Espinoza and Michael Harrington are the team's best options at fullback. The center back pairing is what gets debated. I think Matt Besler and Aurelien Colin are the team's best options.  Yes, Julio Cesar has played for some top European clubs, but I feel he is no longer athletic or physical enough to play against the majority of MLS teams. I do not understand why Peter Vermes does not have faith in Matt Besler. He hasn't made too many mistakes this year from what I have seen, plus he is young. He should only get better and it is always nice to have a left footed CB to play on the left side.

The chance of this exact lineup happening is very slim. The most I can hope for is that Davy sticks in as a holding midfielder and learns to hold back his tendency to push forward. I believe Craig Rocastle is a better passer of the ball, but Davy Arnaud could play the pivot at a decent level.