What Will Sporting KC Look Like During The 2011 CONCACAF Gold Cup?

With the 2011 CONCACAF Gold Cup looming just over the horizon, big news came out on the Sporting Kansas City front on Thursday afternoon in regards to the bi-annual North and Central American international tournament. Sporting KC technical director/head coach Peter Vermes made it known that five (yes, five) of his players have been, or will very soon be, called up by their respective national teams, which means each could miss up to a month of Major League Soccer action.

Defenders Roger Espinoza (Honduras) and Shavar Thomas (Jamaica), midfielders Stephane Auvray (Guadeloupe) and Craig Rocastle (Grenada), and forward Teal Bunbury (United States) make up the group of players who will be leaving Sporting at the beginning of June to join their respective national team camps. The word on Espinoza and Rocastle had recently been leaked by each country's federation, and with Thomas and Auvray being regular captains for their countries, they always seemed a lock to be chosen.

If any of the selections were a bit of a surprise, it was Bunbury. US National Team head coach Bob Bradley has selected the second year forwards for the last two sets of international friendlies in which Bunbury has been healthy - South Africa in November 2010 and Paraguay in January 2011. Jozy Altidore and Juan Agudelo figure to be locks for selection, as well. Where uncertainty creeps in is the third and/or fourth forward spots on the roster. If Bradley chooses to take four, Bunbury and DC United forward Charlie Davies look to be the likely choices. However, if he selects only three forwards, as he has done much throughout his tenure, it looks as if Bunbury will edge out Davies, who is currently suffering from a hamstring injury.

Now that we know how national team's forward situation looks to be shaking out, the bigger question for Sporting KC fans has to be this: what is our team going to look like without all of our players? I'm not the only one wondering, right? Right then, we'll break it down after the jump.

After looking at the above depth charts at the affected positions, you can see that Vermes will be without three first-choice players, a second-choice player behind an already-missing first-choice player, and an emergency centerback in the event of an injury. This will obviously force the manager to make a few alterations to the regular Starting XI for up to a month (more likely two and a half weeks) and move a player or two around on the field to fill a void.

Leftback: Of the four positions being affected by this international call-ups, leftback is probably the simplest fix requiring the least amount of thinking. It's a straight swap for either Lorenz or Aiyegbusi. You can take your pick, really. Lorenz is much more skilled at going forward and providing width in the midfield on the attack. In fact, he often plays as the left winger in the 4-3-3 for the reserve team. Aiyegbusi offers more pace and much more of a physical fighting (notice I didn't mention size at all; he is 5-foot-5), but will fight and scrap with anyone in an opposing shirt. The England/Nigerian international started against New York Red Bulls on April 30 and held speedster Dane Richards under wraps for much of the game. Also, starting rightback Michael Harrington is a capable leftback, which would allow for either rookie Kevin Ellis or rightback/right mid/forward Chance Myers to see the field. 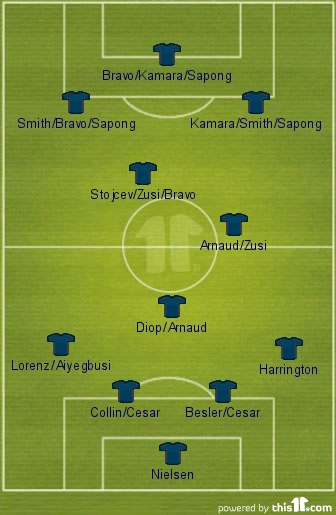 Centerback: It's no secret to anybody that has watched 37 minutes of Sporting KC this season that Thomas is not having his best season ever. In fact, it's those 37 first team minutes he has played in the league that have culminated in three goals being scored while he was on the field. When Collin was officially signed on April 15, he was immediately dropped to fourth on the depth chart and hasn't played a minute in the league since. Where it does affect the team is the lack of a substitute in the center of defense should one of the three defenders ahead of him go down with injury.

Defensive Mid: This is the one that hurt, hurt, hurts. There is a certain faction of media that cover the team (mostly myself and another blogger or two) that feel the team - and the midfield in particular - runs most smoothly  when Auvray and Rocastle play together: a la second half, 2010 season. Vermes has yet to use that combination at anytime in 2011, and the results speak for themselves. Now, even if he were to decide he wanted to, he won't be able to play the two tough holding midfield-type players together for most of June. And, everyone knows what that means; yes, more Diop.

Forward: If there is one position that Vermes' squad is built to sustain itself for an extended period of time without a star player, it's at forward. In fact, the side has done so for much of the season missing two key players - Bravo and Smith. With both returning to health and fitness over the last and upcoming couple of weeks, the loss of Bunbury, who will almost certainly be gone from the club the longest, for over a month shouldn't hurt too much, given that the injury bug doesn't creep back up around that time. In an attempt to get his three most dangerous and available players on the field at the same time, look for Vermes to use Smith, Bravo and Kamara (left to right) together, with Bravo sliding wide right in the event of Kamara coming inside to use his size, and Smith flipping the field to the right and Bravo moving left to give a change of pace on either side. For all of Bunbury's talent and potential, it's these three forwards that offer the most flexibility for Vermes to enjoy.