With just hours to Sporting Kansas City's next first-team game, it might seem a bit late to rehash the events of Saturday night's loss to Seattle Sounders one more time, but it was Sporting KC head coach Peter Vermes, and his words during Tuesday's weekly press conference, that have given new light to the gameplan last weekend. It seemed to many that Vermes had made a change in formation to something slightly less aggressive, a 4-2-3-1 of sorts, while the team usually employs a very fast-pased, high-pressure 4-3-3.

At first, this seemed to be the case to myself, as well. At that point, I was ready to laud much credit on Vermes for changing away from his favored formation when things just weren't working, and doing so with decent success. But, it was Vermes himself who dispelled this theory and explained to members of the media on Tuesday what exactly the slight change in the gameplan was. And for this, I give him even more credit than I was prepared to before.

As James Starritt of Sporting Times says, "for the first time this season I not only have confidence that we can turn it around but confidence that Peter Vermes actually does know what he is doing."

"There really wasn't a tweak in formation, only where we decided to pick them up," Vermes began to explain. He also went on to say, "We were still in our same formation, the only thing is that we dropped our line just a little bit lower." And then this one, which really explained just what it really meant: "Our hunting zone of wanting to win the ball back was a little bit different than in other games, and because of that, it made us more compact from side to side and front to back. And the other thing, too, it didn't allow them to have much space behind."

What exactly that means, we'll explain after the jump...

To demonstrate just exactly what the gameplan was, and what it looks like, we're going to use something very elementary to aide in explanation: Picture Time!! 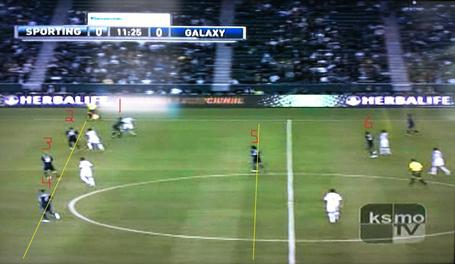 In this first screen shot, of the game a week and a half ago versus Los Angeles Galaxy - the game in which Sporting were drilled, 4-1 - you can see the all four defenders playing a very "high line." What this means, simply, is that they are pressing up into a very advanced area of the field, putting pressure on the opposing team much closer to their own half of the field. Here, the LA attack is being picked up by the Sporting defense no more than 10 to 12 yards from the midfield line.

Advantage: high pressure can sometimes win the ball back early in a position to counter quickly. Disadvantage: a high line leaves lots of acreage between the last defender and goalkeeper, possibly letting opponent in on goal with lots of space to work.

You can also see that only the four defenders on the field are actually in a true defensive position on the field. You've got only one midfielder in that half of the field. Basically, if you play a high line and get burned, you're going to be in a foot race to get back with the attacker before he is one on one with the keeper. And, most forwards tend to be faster than defenders. Bottom line: a high line is high risk, high reward, high consequence. It played a huge part in the 4-1 result against the Galaxy last week. 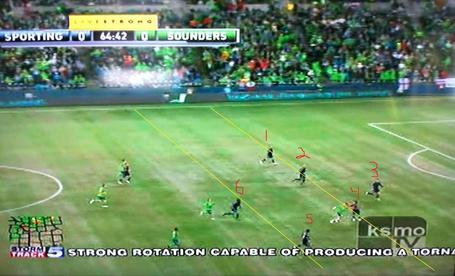 In this second photo, you have a screen shot of this past weekend's game versus Seattle Sounders. In it you can plainly see the much "lower (also, see: deeper) line" being played by the Sporting backline. Quite simply, what this means is that you are conceding some of the midfield territory to the opponent, but in turn shoring up things in the back by taking less risk and allowing much less space behind the defense to get in on goal. Here, the Seattle attack is not being picked up until about 10 yards from the 18-yard box.

Advantage: a lower line forces the opposing attacker to get things right and a shot off in a much shorter amount of time, and in far less room with which to work. Disadvantage:  you're basically conceding half of your own territory in efforts to stay more compact and networked.

If you look back and forth from the first to second shot, the contrast in compactness of the defense and midfield is a stark difference. Against LA, it is only defenders Roger Espinoza (1), Julio Cesar Santos (2), Aurelien Collin (3) and Michael Harrington (4), and one midfielder - Stephane Auvray (5) - in any position to defend and/or pressure. That means there are five Sporting players in their own half of the field that are completely out of the play.

Against Seattle, there are six players - defenders Michael Harrington (1), Aurelien Collin (2), Matt Besler (3), Roger Espinoza (4), midfielders Omar Bravo (5) and Craig Rocastle (6) - all within 6 yards depth-wise of the ball. Midfielder Davy Arnaud is also only yards behind Rocastle, as well. The entire side is much more compact and networked, allowing for a player to be quicker and more aggressive with a challenge, as he knows his cover is only mere feet away.

Vermes, on that exact note: "Since all the guys were really connected and balanced, if the guy next to me feels comfortable that I'm covering him, he feels comfortable doing his job, and I'm locked in here, then that means the next guy and everybody just falls in place like a domino effect."**

** As has been my point in regards to one weak link in the defense all year. It's all a domino effect in soccer.

Vermes, on Bravo playing as the attacking midfielder, but actually being given a "defensive role," which was interesting to me: "From a defensive perspective, he was great. We gave him a really defensive role. I think he's best out on the outside when he's an attacking guy. We needed him to just help us through that game to cure us a little bit. I like what he did. We were more in counter attack mode the last game."

Vermes,  when asked whether they were simply being conservative against Seattle and "being less aggressive": "I would say what we wanted to do was shore ourselves up defensively to make sure we didn't give anything away, and we'll take our chances with the kind of speed we have in the front of the field. The more the other teams have to come and put themselves out there, that means there's more space behind them to play into."

In a roundabout way, the point of this exercise and quotes was to make one quick point - a slight change in tactics and gameplan doesn't mean a full-on change of formation. Because ultimately, "any formation is any formation," and it's all about how you play and move from attack to defense, and vice versa. Oh, and that Vermes has this team about ready to right the ship. That's point number two.