The stage is set for Sporting Kansas City to begin their final playoff push when they play host to the Philadelphia Union this Friday night.
It marks a series of essentially "must-win" games for Sporting, as well as for the Union, who finally seem to be putting things together after a brutal stretch in August and September where Philadelphia were only able to secure one win in nine matches.
Last Saturday Real Salt Lake was without Tony Beltran, and Chris Wingert on the outside of the RSL defense. Sporting Kansas City did take advantage of the lack of starters out wide to an extent, as Michael Harrington was able to continually push the ball up the pitch, and create some threatening chances crossing the ball in to the box. However, they weren't able to fully capitalize, as they were held scoreless by an impressive performance from Real Salt Lake goalkeeper, Nick Rimando, and a stingy center back combo of Jamison Olave, and Nat Borchers.
This week Sporting Kansas City has another chance to right the ship, as Philadelphia goalkeeper and captain Fayrd Mondragon will miss the match with a ring finger fracture on his right hand. The loss of Mondragon leaves Zac MacMath as the only goalkeeper available to play on Friday. Third string keeper Thorne Holder will be unavailable due to a concussion. MacMath filled in very nicely for Mondragon in the Union's 1-0 win over the Columbus Crew on September 17th, so it goes without saying that MacMath will be able to hold his own. But I'm hard pressed to believe that Sporting will be much happier seeing MacMath in goal, then Mondragon.
One thing I do expect to see is the return of Roger Espinoza to the defensive midfield position. Sporting Kansas City manager Peter Vermes was looking for a more defensive minded lineup when he moved Julio Cesar up to the defensive midfield position and moved Rogers higher up the pitch to team with Graham Zusi. With the game Friday being in the friendly confines of LIVESTRONG, I anticipate a lineup that allows Sporting the ability to create more offensive chances than at Rio Tinto last Saturday.
The Sporting back line will have their hands full on Friday, as Philadelphia forward Sebastien Le Toux will most likely provide real problems. Le Toux is the type of player that can give defenses fits, as he is not only a very good scorer, but he's an adept passer as well. Sebastien has tallied 7 goals, and notched 8 assists for the Union this season. It's also worth mentioning that Le Toux has what seems to be endless amounts of energy, and one of the highest work rates in MLS.
It will be interesting to see who Vermes starts opposite of Matt Besler in the other center back spot. My heart tells me Julio Cesar, who has seen a fine run of form over the past month or so, but my mind tells me Peter will start Frenchman Aurelien Collin. Collin looked shaky during a couple of moments in the Real Salt Lake match, and it was his foul that set up Nat Borcher's score on the subsequent free kick to give RSL a 1-0 lead.
Philadelphia is a team with some seriously talented young players. As I mentioned in my chat with Scott Kessler of The Brotherly Game, MLSsoccer.com named four Philadelphia players to their "24 Under 24" list. The four include; Danny Mwanga, Roger Torres, Jack McInerney, and former wonder-kid of American soccer; Freddy Adu.
Adu has been an enigma his entire career, and the hope was that the rejuvenation he experienced earlier this year with the US Men's National Team would carry over to his play on the field in MLS when he signed with Philadelphia after numerous loan spells abroad. Thus far, I'd have to say the results have been underwhelming, as Adu has only been able to net one goal in the six games he's played for the Union. Not exactly the type of production you would like to see from a player with Adu's skill set. 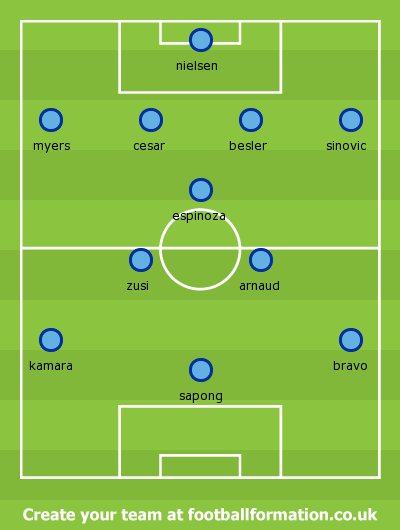 One minor change from my projected line up from earlier this week. Chance Myers is now listed as probable for Friday's match. I would imagine if Myers is ready to go, he gets the start at the right back position over Michael Harrington, who filled in admirably for Myers last week against Real Salt Lake.

I also have a sense that we could be seeing Davy Arnaud in the starting line up. The only question was whether Davy's fitness level was where it needed to be, but the fact that Arnaud played 90 minutes in reserve team match this past Sunday signals that perhaps Davy is ready to wear the captain's armband once again.

There's no reason that Sporting shouldn't be able to come away with three points on Friday. They're at home, and with what I would have to imagine will be a near sell out crowd, a more offensive minded Sporting Kansas City squad should be able to seal the victory. If they can do that, Sporting will sit atop the Eastern Conference, two points ahead of Columbus. With a loss, Sporting will fall to third, and only one point in front of a somewhat resurgent Houston Dynamo team.

They don't come much more "must-win" than this.