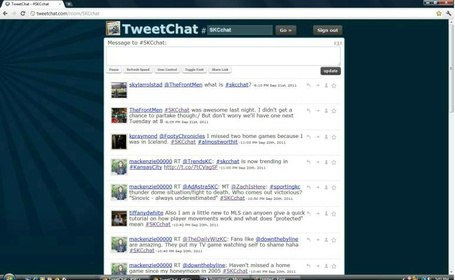 The Sporting specific chat was the idea of Sporting Kansas City fan and Ad Astra founder Christian Sinclair.  The chat was made possible by a website called TweetChat, which allows the twitter user to focus solely on one particular topic, in this case Sporting Kansas City, without getting sidetracked by the other happenings on twitter.

For a better explanation of what exactly TweetChat does, here's a description directly from their website;

Hashtags identify specific topics and those hashtags allow TweetChat to connect you with people talking about similar things.

TweetChat helps you put your blinders on to the Twitter-sphere while you monitor and chat about one topic.

Choosing a hastag directs you to a TweetChat room.

Each tweet automatically gets the hashtag added and the room auto-updates.

You can use the "user control" area to feature people you like or to block spammers.

"Smart pausing" has been added so when you scroll down the page, it will not refresh, helping you avoid replying to the wrong person.

The TweetChat this past Tuesday lasted roughly an hour, and thanks to the website Tweet Reach, we are able to see just how much of an impact the Sporting TweetChat actually had on the twitter community. 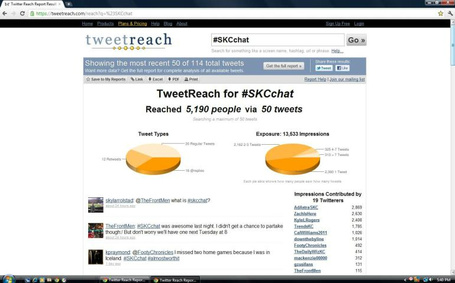 Having the chance to actually participate in the TweetChat on Tuesday, I have to say that I found it quite fun, and engaging. I'm a firm believer that any idea that makes it easier for Sporting Kansas City fans to connect to each other and have dialogue is a great thing,and it can only help to spread the passion of the fan base, and to promote the Sporting Kansas City brand.

And don't worry if you missed out this week. Sinclair (who you can find on twitter @AdAstraSKC), and other Sporting Kansas City fans have already decided to try and make this a weekly event. Every Tuesday night, from 8PM to 9PM CDT.

This coming Tuesday (September 27) at 8PM simply head over to http://tweetchat.com/room/SKCchat and join the conversation.