Last Five Match Results
Sporting Kansas City      L-T-W-L-T
Columbus Crew       L-L-T-L-L
The one that got away. That's what this past Friday's match against the Philadelphia Union will be remembered as.
Of course,  the 1-1 draw with the Union wasn't a terrible result. After all, it's not like Sporting lost the match. They were able to add a single point to their Eastern Conference point total, but I have to say that there's a little sense of disappointment in the air. With a packed LIVESTRONG Sporting Park, and a weakened Union squad (no Danny Mwanga, no Freddy Adu, among others), you would have thought Sporting was nearly a lock for three points.
I won't rehash the whole point about Sporting Kansas City not being able to finish their chances. If you've read some of my previous posts you know that I've been harping about this for some time now.
However, as the end of the season draws closer, I'm starting to wonder if maybe Sporting Kansas City have peaked. I say this only because I feel like the elite teams of MLS would have found a way to win that game on Friday.
Sporting Kansas City is an extremely talented squad. Just look at the roster;
Forwards- Kei Kamara, Omar Bravo, Teal Bunbury, CJ Sapong. An absolute smorgasbord of talent, and I'd be willing to hear of a team with a better front line than what Sporting is able to throw out on a game to game basis. Kamara and Bravo have had very good seasons this year for Sporting. Bravo leads the team with 9 goals. Kamara falls right behind with 8 goals. And for as much as I've "constructively criticized" Teal this season, he still have 7 goals to his name. CJ Sapong is in the running for MLS Rookie of the Year. And I haven't even mentioned Soony Saad, who many media outlets projected as the #1 pick in the 2012 MLS SuperDraft. Name me a more talented group of forwards.
Midfielders- Graham Zusi, Jeferson, Roger Espinoza, Davy Arnaud.  Graham Zusi has had a great season with 5 goals, and 6 assists. I think it's safe to say that the Jeferson experiment has been a disappointment, but it's not like he's played horribly. Arnaud has been hurt much of the season. Roger Espinoza has been a mixed bag, even if it's not an evenly mixed bag. I'd like to think that Roger does more things well than things he does wrong. In fact, I'm starting to think that Roger plays by some sort of strange mathematical equation;
2 good plays = 1 bad play
For every two good plays Roger makes, it seems he absolutely has to make one bad play. The one bad play in the Union match being when he dove after minimal contact. I won't waste anyone's time writing 1,000 plus words on how much I hate when players dive and embellish contact, but just know that it burns me up.
Defenders- Chance Myers, Aurelien Collin, Julio Cesar, Matt Besler, Seth Sinovic.
Chance is having a break out year. He's finally been able to stay healthy, and live up to being drafted #1 in the MLS SuperDraft in 2008. Collin, and Cesar have both been very solid this season. Collin's looked a little shaky the past couple of games, but I still feel good when he's back there. Cesar's been a revelation the past month or so. Sinovic has to be in the running for best signing, doesn't he? Both the New England Revolution and Real Salt Lake passed on this kid. He's now a no brainer start for Peter Vermes at the left back position.
Goalkeeper- Jimmy Nielsen. He's been simply fantastic. There's no other goalkeeper I'd rather have in MLS than Jimmy. Any one who's read some of my work before knows that I've been on the "Graham Zusi for SKC MVP" bandwagon for a while, but Jimmy is making it tough for me. He's been so good.
So in review, Sporting Kansas City definitely have the talent, and the potential to be the best team in the East. One could make an argument that they could use a creative midfielder, but other than that, the team is stacked. However, there is still something missing. I'm not exactly sure what it is just yet, but I definitely think it's not all quite there. Maybe it goes back to my whole "killer instinct" theory. I've written before questioning whether or not Sporting Kansas City were able to put teams away. All of the great teams in any sport are able to do this. When they have their opponent down, they finish them off. After Sporting's 3-0 win over Houston on September 10, I thought that the question was answered. Sporting absolutely dominated the Dynamo in that match, and I felt that, perhaps, the team had finally turned that final corner.
But here we are, a mere two weeks later, and I have to once again ask the question; What exactly is stopping this team from becoming one of the elite teams in MLS?
I'm not quite sure, but Sporting will have to sort things out rather quickly. The Columbus Crew come to Kansas City on Wednesday for the latest edition of "The Most Important Game of the Year."

Sporting had the chance to seize control of the Eastern Conference against Philadelphia. However, having failed to do so, Sporting is now currently in third place, as the Houston Dynamo defeated FC Dallas 1-0 on Saturday. Houston now sits atop of the Eastern Conference with 42 points, followed by Columbus and Kansas City, both at 41 points, but with Columbus holding the tiebreaker thanks to a 1-0 win over Sporting in April that gives them the head-to-head advantage.
What does it all mean? Well, it means Sporting Kansas City MUST win on Wednesday. They just have to. The Eastern Conference race is tightening to a point where Sporting essentially can't afford to make any more mistakes if they want a top three finish, and a guaranteed playoff spot. They have to protect their home field. They only have two more home games, Wednesday against Columbus, and October 15th against New York. Sporting need the six points from these two games.
What do we expect from Columbus? That's a great question. Honestly, I'm not sure what to make of the Crew. I suppose it probably depends on which Columbus team shows up, although I'm hoping for the Columbus team that was trounced 4-2 by Toronto a couple of weeks ago.
I feel comfortable saying that Sporting Kansas City is the better team. Unfortunately, we've seen Sporting dominate long stretches in games, without actually being able to cash in on the offensive side. Creating chances haven't been the problem for Sporting. Finishing them have been a different story. Will Sporting be able to finish their chances? If so, then I think they should be fine.
Projected Starting XI; 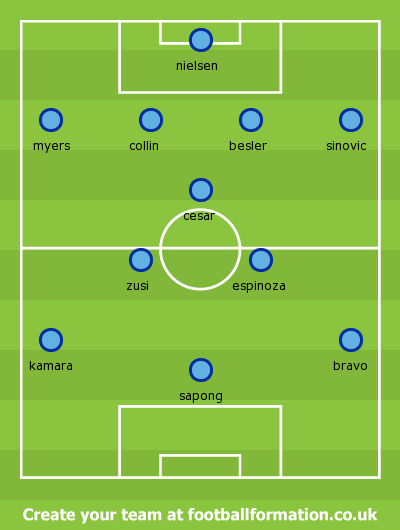 I'm resigned to the fact that perhaps Sporting Kansas City is a better team with Julio Cesar in the holding midfielder role. In the Philadelphia match, Peter Vermes decided to start the game with Espinoza in the defensive midfielder role, and with Cesar teaming up with Matt Besler in the center of the defense, and Aurelien Collin on the bench.

I think it's safe to say that Vermes was not happy with the results, particularly with the play of Jeferson, who was pulled in the 46th minute of play. Collin was then inserted into the center back position where Cesar was playing, and Julio was moved up to holding midfielder. Espinoza moved  higher up the field to team up with Zusi.

In the 56th minute of play, Sporting Kansas City scored. Coincidence, perhaps, as Sporting did have multiple chances in the first half that they just weren't able to finish, but Vermes might feel like he wants his best players on the field, and at this point, Jeferson is the odd man out.

Of course, if Davy Arnaud is fit enough to come back, then I think he starts, but after being wrong on Friday, I'll bet that he's not ready to go just yet.

It will be interesting to see who Vermes starts at the top of the formation. Bunbury started against the Union, and was basically non existent. That makes the second straight game that Teal hasn't quite shown up. Slightly disappointing after his two goal performance against the Dynamo. I think Vermes will start Sapong against Columbus on Wednesday. With as much time as Sporting spent crossing the ball into the box against the Union, Sapong will offer more of a threat to actually connect, and convert.

Player to Watch; Andres Mendoza- Mendoza has 11 goals this season, only two behind MLS leader Dwayne De Rosario of DC United. Sporting were unable to keep Philadelphia forward Sebastien Le Toux out of the stat sheet Friday, as he netted a goal in the 63rd minute. Sporting can't afford  the Crew's best scorer that same luxury.

If Sporting Kansas City are the team we hope and think they are, they should be able to take of business at home. If Sporting can't collect three points, then perhaps it might be time to actually start worrying.