Last Five Match Results
Sporting Kansas City; T-W-L-T-W
San Jose; T-W-L-L-T
Sporting Kansas City couldn't have picked a better time to face the San Jose Earthquakes than right now. After a huge win against the Columbus Crew to take sole possession of first place in the Eastern Conference, Sporting now head to sunny Santa Clara, California and take on one of the truly struggling teams in MLS when they face San Jose Saturday night at Buck Shaw Stadium.
That's not to say that three points is a given for Sporting. After all, San Jose does have a forward combo of Chris Wondolowski, and Khari Stephensen, which could provide Kansas City fits throughout the match.
Wondolowski, last season's MLS Golden Boot recipient (18 goals), isn't having quite the season of a year ago, but he does still have eleven goals to his name, which isn't anything to scoff at. Stephensen, a midfielder who has converted to striker this season, has a cannon of a right leg on par with Sporting's very own, Graham Zusi. Stephensen has tallied five goals, and three assists this season.
The Earthquakes' website had this to say about the Wondolowski/ Stephensen duo;

Either Wondolowski or Stephensen has scored in each of San Jose's last five matches, a run in which the Quakes have gone 1-1-3 after suffering eight shutouts in their previous 12 games.

I think it's safe to say that the number one key for the Sporting defense will be shutting down these two players.

On Wednesday we saw Sporting Kansas City once again susceptible to conceding an equalizing goal not too long after Kamara put Kansas City ahead 1-0 in the 15th minute of play. Emilio Renteria blasted a shot past Jimmy Nielsen in the 34th minute to tie the score at 1-1. From my viewpoint, it appeared the defense left Renteria way too much space in the middle of the field. It's these types of lapses Sporting won't be able to afford against a player like Wondolowski.

There's no denying that this season has been a disappointment for the Earthquakes. It was only a year ago that San Jose were in the playoffs, and vying for a spot in the MLS finals, before falling to the eventual champions, the Colorado Rapids, 1-0 in the Conference Finals.

An assortment of injuries, suspensions, and trades have all taken their toll on San Jose's 2011 campaign.

Staggering Statistic of the Week; San Jose has only one win in their last seventeen MLS matches. If you thought the tough run Sporting Kansas City had at the beginning of the season was rough, the Earthquakes have topped it, and they've topped it easily. Their only win since their 4-2 victory over D.C. United on June 11th came roughly three months later; a 2-0 win over the Chicago Fire September 10th.

Which brings me back to my initial point that Sporting Kansas City are playing this game at virtually the best time possible. It's a golden opportunity to tighten their grip on first place in the East. That is if they can play to their potential and take three points against a team that is not currently their equal.

If Sporting can find a way to defeat San Jose on Saturday, they'll be that much closer to securing a playoff spot in an ever tightening Eastern Conference race. Win against San Jose, and I feel safe in saying that Sporting would only have to draw one of their last two remaining games against New York and D.C. United to qualify for the playoffs. 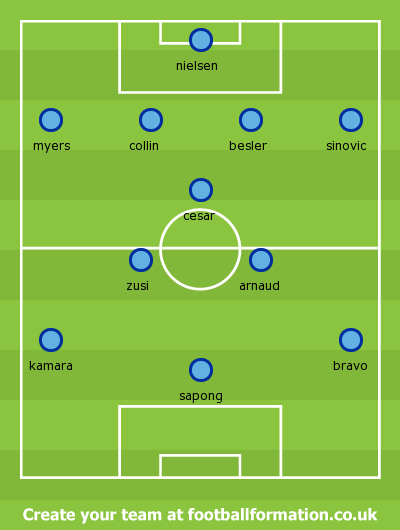 I'm not anticipating any changes to the line up Peter Vermes used in the Columbus match, especially given the absence of Roger Espinoza, and the return of Davy Arnaud.

Sapong didn't have his best game on Wednesday, but he did prove his worth by forcing Chad Marshall to foul him in the penalty box in the first half, setting up Sporting Kansas City's first score of the night with a Kei Kamara penalty kick.

I do think it is somewhat strange the lack of goal scoring we've seen from the center forward position as of late, given the talent of both Sapong and Teal Bunbury. I realize Bunbury does have seven goals this season, but they have come in bunches, as his form has been inconsistent through the course of the season. I suppose I'm just looking for a bit more consistency from that particular position.

Another thing that I noticed from the Columbus game was that Omar Bravo essentially disappeared for long stretches of the match. At one point in time in the second half, Bravo received a pass and I remembered thinking that I forgot he was even still in the game. I'm no soccer tactician by any stretch of the imagination, but I have to think that there has to be a better way to get more from Bravo.

Player to Watch- Hands down, it has to be forward Chris Wondolowski. We saw on Wednesday night, Columbus Crew forward Andres Mendoza handed a couple of golden opportunities by Sporting through the course of the match that he was simply unable to convert, and Kansas City will have to make sure they don't allow Wondolowski those same chances. Wondolowski is now tied with Landon Donovan for number 2 on San Jose's all-time goals scored list at 32, trailing only Ronald Cerritos, who finished his San Jose career with 61 goals.

At the end of the day , Sporting are simply the better team this season, and they should be able to overwhelm a San Jose squad that has struggled to score in 2011. If Sporting can keep Wondolowski and Stephensen at bay, they take the three points.