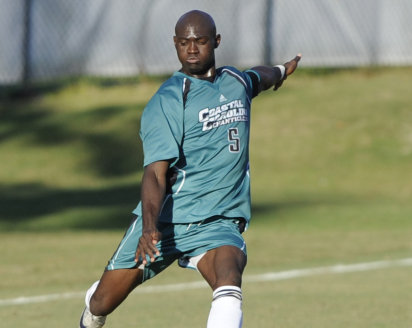 Finding information on college soccer prospects online can sometimes prove to be a daunting task. It's not like looking up information about college football, and basketball players, where everything you could ever want to know about them is documented on a ton of Mock Draft websites.

So, it comes as no surprise that I had a little bit of a hard time finding out very much in depth information about Sporting Kansas City defender, Cyprian Hedrick, who the club selected in the second round of last Thursday's MLS SuperDraft.

Luckily for me (and more importantly, Sporting), Cyprian appears to be one of the nicest, forthcoming people out there, and he was able to take some time to answer a few questions on a number of topics. Cyprian, was generous enough to talk in depth about growing up in Cameroon, his college career, and what his goals are for the 2012 MLS season.

A big thank you to Cyprian for answering these questions.

1. Could you give the fans a little bit of background information about yourself in regards to your younger years? When did you move to the States?

I grew up in Duala, Cameroon, which for the most part was a poor area. My whole family lived in one house. My grandmother, my brother, my uncles, aunts; everyone under one roof. I had to walk miles to school everyday. As a little kid growing up in Cameroon, soccer was the national sport. Me and my neighborhood friends loved playing soccer, so everyday after school we would play little pick up games. I was always the smaller, skinny kid player with the older boys.

As a young kid, I watched older men play in the leagues and I remember thinking to myself, " I would love to one day get good enough to come out here in my team jersey with my name of the back of it and play with all of these guys". So, I watched a lot of soccer and I would go out and play with friends everyday and try to do things I had seen players on TV do.

My idol, even though he was a little bit before my time, was Roger Milla (former Cameroon striker). I believe that was where I got my love to score goals. Shortly after my mom married my step dad, who was from America, we moved. At the age of 9, I said goodbye to my family and my older brother and left for the United States, in order to start a new life and to have an opportunity to make something of myself.

When I first moved to Texas, it was very hard for me because in Cameroon our primary language is French, and English was thought of as a second language. The only English word I knew once I got to texas was "Dad," which is what I called my stepfather. Since I did not speak English, I was made fun of alot of times and sometimes felt very left out. By the time I was 11, I had learned English completely. I could read it and write it. Once I learned English, I was able to interact with people, and I started making a lot more friends. I was a decent student in school, I hardly ever got in trouble, but I always excelled in sports. I played basketball, football, and of course, soccer. Obviously, soccer was the sport I was the most serious about, as I chose to give up the others to focus on that.

2. How did you spend your day during the 2012 MLS SuperDraft? Were you surprised that you were selected? Did you have any indication that prior to the draft that Sporting KC were potentially looking at you as a possible selection?

On the day of the draft I was at my house watching it on ESPN. I was not surprised that I was selected. I was just surprised how soon I got selected. In my mind, I figured my chance of getting drafted in the first 2 rounds were very small, since I was not invited to the MLS Combine. I thought the people who got invited to the combine would be picked up first before I would have a chance to get selected. Prior to the draft, I knew SKC, as well as a few other teams, had some kind of interest in me. The only thing I did not know was how much interest each of them had. SKC had come in contact with my agent and also my coach, who let me know they were interested in me, and also interested in possibly drafting me.

3. One of the team's concern's prior to the draft was depth at the center back position, which they addressed with your selection. There seems to be a very good chance you will be able to make an impact in 2012, as head coach Peter Vermes has stated that he thinks you are already physically ready to step in on day one and contribute.. What are your personal goals for this season?

I have a couple of personal goals. My first personal goal is to learn the system and the style of soccer coach Vermes likes to play, and also to bond with all of my teammates. In my opinion, team chemistry is the most important part of forming a great team.

Another goal of mine is to adapt to style and also the speed of play. I am going to watch the veterans and the returning players on the team and learn as much from them as possible. My last goal is to help contribute in anyway that is asked of me to help my team win another MLS Cup.

4. Some of the bio's about you online have said that you can, and have played midfield in the past. Did you mainly play defensive midfielder? Is playing midfield something you feel comfortable doing?

In high school I played striker and I was decent, but at the same time I played holding midfiled with my club team and at times a little bit of defense. Holding midfield is a position I have played most of my life, so I have a pretty good understanding of the position. It is a position I have always felt comfortable playing. I am a defensive minded person and I am pretty versatile, so as long as you don't put me in goal or in an attacking position, I will be OK. Its always depended on what position my team needed me to play.

Coming out of high school I played forward and wanted to try to pursue that in the college level. When I got to San Jacinto, there were 4 other players in my position that were alot better than me. My coach, seeing alot of potential in me, offered a red shirt year so I could technically improve and adjust to the speed of college soccer. During the off season he tried me in a couple of different position. He played me a little bit at right back, then he played me a little bit at central defender, and he also tried me at holding mid. He could see that I wasn't meant to be a forward because I was a much better defender and I was very defensive minded. The next year, having earned all of my teammates respect in the off season on the field and also off, I was chosen to be one of the team captains. My coached liked the way I played the holding midfield position and with the system he wanted us to play, I was the right guy for it.

The 2008 season was one the best San Jac has had so far. We went to the national finals where we were beaten by Yavapai Community College 1-0. After San Jac I was recruited by Coastal as a holding mid. Playing at San Jac really helped me get used to the physical style of play in D1. Once I got to coastal it took me a little bit of time to adjust to the style and also the speed of play, but I learned very quickly and adapted. Once i adapted, I worked even harder to try to elevate my game. As a sophomore I started alot of games in the holding midfielder position. My junior year, with the injury of a couple of our key defenders and also a new formation, I was asked to drop back and play as a central defender and also as an outside back at times. My senior year I came in with the intentions of playing holding mid but ended up playing center defender because my team needed me at that position and plus I had a little bit of experience under my built since we had such a young team.

Overall, my experience at San Jac helped shape me into the player I have turned into today. Coastal was great for me. I matured not only as a student, but also as an athlete. I had a great college career and I learned a lot. It really prepared me for the next level. I also played PDL during the summers for Fresno Feugo in 2009-2011. In 09 I played holding mid for them. in 2010 I played holding mid until the end of the season, where I played a little bit of center back. This last summer I played all 3 of the same positions depending on where our coach and my team needed me to play.

*Cyprian also wanted me to share with everyone that yesterday was a big day for him, as he was baptized. Congrats, Cyprian, and welcome to the Sporting Kansas City family!