Now that the 2012 MLS SuperDraft has concluded, and Sporting Kansas City's training camp is officially underway, I thought ,"Why not take a look at the club's roster, and attempt to come up with a Starting XI, as well as first off the bench for each position?"

A lot of these are complete shoo-ins. Everyone knows the four players that will make up Kansas City's back line at the start of the season, but there are a couple of spots where things are a little more interesting.

Sporting has made a number of off-season moves, including the acquisitions of Bobby Convey, Paulo Nagamura, and Jacob Peterson. Out of the three new players, I would imagine Convey will be the only starter... at least on opening day.

I've written a little bit about Convey in the past. I actually think that Convey replacing Bravo on the left wing will help Kansas City's attack, as Bobby is a natural left winger, and he'll be looking much more to set up our center forwards with crosses into the box. Bravo spent much of his time cutting back into the middle of the pitch. Come to think of it, I really can't remember seeing Bravo cross a ball.

I can also envision Nagamura perhaps working his way into the starting lineup in the midfield alongside Graham Zusi and Julio Cesar somewhere down the line, especially if Roger Espinoza can't learn to control his emotions and exercise better judgement on the field more than what he has in the past.

I still think there is a chance that the club will bring in a designated player to play attacking midfield, but at this point, I'm not so sure that the club would be best served doing so (Robb Heineman tweeted earlier today that a DP signing in this window is unlikely at this point).

So as the roster stands, here's my projected Sporting Kansas City lineup, including a list of the players I think will round out the squad's best 18 at this point. 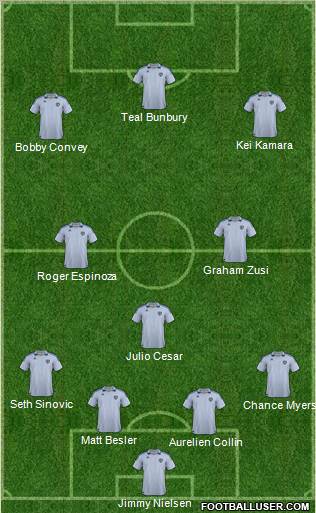 So now that you've seen my preseason Starting XI and first off the bench for each position, what's your starting lineup for opening day?