Claudio Bieler: Fitting the New Guy into the Team

A tactical and strategical look at how new Designated Player signing, forward Claudio Bieler will fit into his new club, Sporting Kansas City.

Share All sharing options for: Claudio Bieler: Fitting the New Guy into the Team

"We felt as though we're in a moment in this organization where a piece here and there could really make the difference. We've always felt (Claudio's) mentality and the way he played would fit this team really well and he would fit in the way Peter wants to play.

"He's got a lot of support around him, so it's not as if it's a torch he has to carry by himself. It's a time in our organization that it's time to go for it. It's a time to win multiple Cups in multiple years and string them together, and now's the time to do that."

Bieler is a player that Vermes and Co. have been tracking for a handful of years, and with his obvious goal-scoring pedigree (57 goals in 110 games for most recent club, LDU Quito - an average of better than a goal every other game), it's easy to see why. Assistant coach Kerry Zavagnin was highly complimentary of the forward known as "El Taca" on Tuesday afternoon.

"Claudio Bieler is a player that has been on our radar for a number of years now," Zavagnin said. "Certainly, Claudio's record speaks for itself. His goal-scoring ability is his biggest strength. To add him to the group of an already athletic, powerful, promising young group is a tremendous addition to that part of the field. Claudio, no doubt, if he does what he's done over the course of his career, he will provide goals for us."

That's all well and good, but how might Vermes and Zavagnin choose to deploy Bieler on the field of play come March 2 when Sporting KC open their 2013 campaign away to the Philadelphia Union, which was also announced on Tuesday?

A "poacher's game." Bieler will differ greatly from current center forward options CJ Sapong and Teal Bunbury. For starters, Bieler is diminutive in size compared to the two American powerhouses, but possesses a much greater technical ability than his new teammates, necessitated by that lack of elite size. That's not to say that Bieler isn't solidly built himself, just at a lesser height.

Bieler is very crafty within the 18-yard box - an area in which Sporting struggled for precision and creativity in 2012 - and should provide a unique change and option for Vermes. Bieler will show crafty touches and ideas in and around the box, much like 2011 Designated Player Omar Bravo, who sometimes seemed to look a level higher than his counterparts in Sporting blue.

As with many great center forwards, Bieler will display the tendency to "drift in and out of games" from time to time, but often re-introduces himself back into a game in grand fashion. One person quite familiar with Bieler's career put things this way: "In terms of going missing and having those special moments (of brilliance), I think it's probably fair to compare him with someone like [Fredy] Montero." Who wouldn't take a player similar to Montero?

Bieler's ability to also stretch backlines with his long-distance shooting from the 18- to 25-yard range adds yet another dimension to his game - again, something Sporting sorely lacked from their center forwards in 2012. Only Graham Zusi and an occasionally well-struck ball from Kei Kamara are likely to rival Bieler's ability in this area.

Is he the starter? From day one, Bieler will be the most talented, skilled and instinctual forward on Sporting's roster, barring additional off-season signings. Sapong and Bunbury have the added bonus of knowing MLS and its physical nature of play, granted, but given that his integration into the squad goes smoothly through pre-season, Bieler should be the starting center forward on March 2, with Sapong either pushed wide left or to the bench, and Bunbury continuing to recover from a torn ACL and damaged LCL in his left knee that ended his 2012 season in late August. 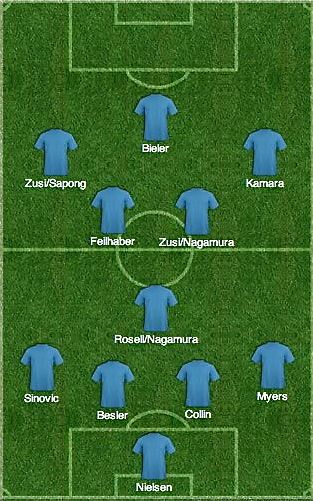 Fitting in the formation and style of Sporting. While Bieler will likely be the offseason's biggest acquisition in terms of name and salary, it will have been a new signing preceding Bieler that may well be the biggest reason for his potential success with Sporting. Midfielder Benny Feilhaber, acquired via trade from New England Revolution on December 11, will suit Bieler's skill set very well. Feilhaber is a very ball-controlling midfielder - a maestro in the center of the park, if you will - and given El Taca's lack of great size, having the ball at his feet and running onto through balls - two specialties of Feilhaber - to finish deftly could see Bieler thrive in MLS.

The Feilhaber-Zusi duo will also be an interesting dynamic to follow with Sporting. Zusi will likely find himself playing both next to Feilhaber in the midfield and as a left winger at given times. Zusi's skill set isn't all that different from Feilhaber's itself, so seeing how the three of them - players that will like to operate in the same areas of the field - interact, link up and stay out of each other's way will be key. Zusi notched 15 assists in 2012, and with an attacking corps and system like SKC's, Feilhaber could easily do the same the coming year. The center forwards could each have very productive scoring seasons in 2013, much thanks to the addition of Feilhaber, irrespective of Bieler's arrival. Goal-scoring chances will come much more frequently to the trio of Bieler, Sapong and Bunbury, and when they do, they'll be of higher quality. The onus is then on them to convert.

Only time will reveal Bieler's ultimate impact upon Sporting KC's title-winning aspirations. As Heineman said, he's just a piece of the puzzle, a player brought in to fill a very specific void, not someone asked to carry the entire squad. And with that sort of help, Sporting KC may have just found their newest double-digit goal-scorer.