Looking Back: Reviewing Picks 31 and Beyond

Share All sharing options for: Looking Back: Reviewing Picks 31 and Beyond

We finish our review with players selected 31st through 38th in the 2007 through 2012 SuperDrafts. This review will stop at the 38th pick since it is the final selection of the 2013 SuperDraft, but will note some great selections that occurred in rounds that no longer exist in our final post of this series. You can check out the rest in our MLS SuperDraft Review story stream. The team that drafted the player is shown in parenthesis.

Omar Cummings converted 39 goals and 27 assists in his time with the Rapids and started on the 2011 MLS All-Star team. He was just traded to Houston. Miller and Karkas never played in regular season. Zak Boggs played 29 games as a Midfielder/Forward for the Revs, but terminated his contract early after receiving a Fulbright Scholarship to study Cancer Cell and Molecular Biology in England. Chris Korb may have worked his way into the starting fullback position at DC United as Daniel Woolard recovers from injuries. Per wikipedia, Ryan Meara is "a talented goalkeeper who has a physical resemblance to NBA legend Larry Bird." While true, his doppelganger status is not as important as his solid performance between the posts prior to his injury.

Best Pick: Omar Cummings. Props to Boggs though, the guy is trying to find a cure for cancer.

Sinisa has been a back-up in the league, aside from an NASL stint with the Impact in 2011. Cordeiro played in 7 MLS games. Boateng never played but is now in the first division in Finland. Nakazawa is now a backup for the Galaxy. Ampaipitakwong had a pair of assists in a 2011 game against Chivas, but has now moved to the Thai Premier League. Blais was released.

Allen did not play, Sodade has not played yet. Chinn played in five games, scoring a brace against Philadelphia in a USOC qualifier. Banner was a back-up for Chicago for four years and is now in Finland. Mike Grella has spent most of his career in English League One (the third tier in the English system). Jiménez started thirteen games for the Galaxy during the summer.

Ray Gaddis was a good pick-up for the Union last year, but Nick LaBrocca has had a better career this year before running into the goal-sapping morass that is Chivas USA.

Hmm... the often-injured Barklage emerged with 2 goals and 4 assists this past summer, but I'm intrigued by the talent (and hair) of RSL JUCO pick-up Velasquez. This is a potential pick, and very late in the draft.

If we take Sounders complaints that GAA should be the ultimate determination of who deserves MLS Goalkeeper of the year, than little-used Steward Ceus should be given the award, having allowed 1 goal in 201 minutes of play at the tail end of the season (90 of those minutes came against Chivas USA so I don't know if that really counts). Warren Creavalle made multiple starts for the Dynamo as a defender. When in doubt, assume Dom Kinnear knows what he's doing when he's assembling a back line.

Kenney "Sky" Walker had a great career with the Knicks in the late '80s, hopefully he can provide the Union some of that presence in the paint. Seriously, he and Byrne have logged one game a piece. Yeisley played five games. I'll go with the youngest guy.

After a disappointing showing between picks 11-20 and 21-30, picks 31-38 appear more in line with expectations: a few busts, a lot of back ups and short careers, plus a few regular starters.

Best picks from SuperDraft rounds that no longer exist:

On the whole, 115 players selected in the first 38 picks from the 2007-2012 SuperDrafts played in the 2012 MLS Regular Season. Their performance in the league directly related to where they were picked in the SuperDraft: 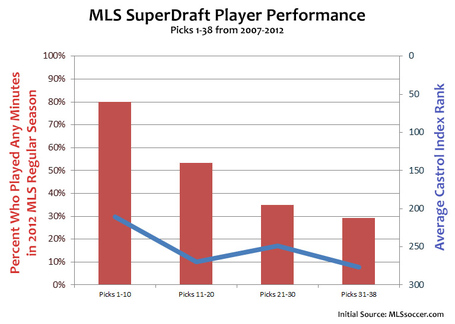 The bars measure the total number of players who logged any minutes in the 2012 MLS Regular Season, the graph measures the average Castrol Index Ranking of those players who logged any minutes. The Castrol Index attempts to quantify the productivity and efficiency of a player while they are on the field, and does take into account the total number of minutes played. While the Castrol Ranking does have its drawbacks, it is a fair method of taking a broad assessment of performance from a group of players.

The higher a player was picked, the more likely they are to have played in the league this past year. The Castrol Index discovers an interesting wrinkle in that after the top 10 picks, the performance of players between picks 11-38 is largely the same.

Compare this to the NFL draft, where a study by Niners Nation found that "as the NFL draft proceeds, there's a steep decline from the expected performance of the 1st pick to that of the 65th; but after that there's only a gradual decline over the next 200 picks." While there are more players and positions in the NFL, a comparable expectation of performance from MLS would greatly exceed the 10 or so spots we are seeing.

This last chart is not surprising. The average career of a soccer player can be short. Older players have been assessed longer, had more opportunities for injuries, foreign contracts, or other life decisions and therefore less likely to be playing in MLS. Still, it is notable that less than half of the assessed 2009 SuperDraft picks played in the 2012 regular season.

These two charts do not take into account the players like Tim Ream or Mo Edu that have opted to play in an overseas league of equal or better quality to MLS. The number of players who fall into this category is very small compared to the 228 players assessed.

In the end, the value of SuperDraft is murky. Managers like Bruce Arena and Peter Vermes have used the draft to create a core of young players which has led to their recent success. Other managers have seen little impact from their drafted players, either by poor decision-making or by choice, and would possibly see their prospects for success improved without a draft. Some may argue the SuperDraft is not as much a murky problem as it is a symptom of the college/pro disconnect, and that managers are doing their best in assessing players that play limited minutes in the NCAA system. That is an argument for a different time.

The 2013 MLS SuperDraft will be held on January 17. Unless you have a top 10 pick or Bruce Arena is your coach, don't expect much from the player you drafted.

Does the MLS SuperDraft Work?