The Digital Crawl: Sebastien Le Toux to Vancouver, Kris Boyd to Portland, and Donovan vs. Dempsey

Share All sharing options for: The Digital Crawl: Sebastien Le Toux to Vancouver, Kris Boyd to Portland, and Donovan vs. Dempsey 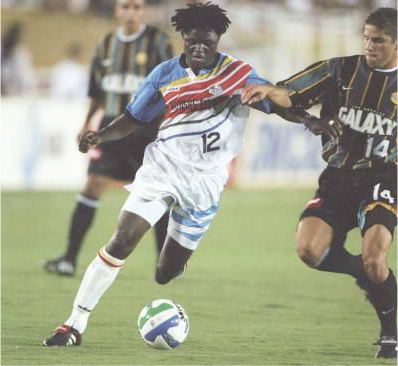 We here at The Daily Wiz have been doing quite a bit of brainstorming lately, trying to shape this thing into a more consistent blog. One of the many things Joe, Alex, and myself discussed was what to do with The Daily Links. I initially would have liked to do them every day, but over time I realized two things: 1. It's extremely time consuming, and 2. I feel like they aren't as effective when I do them everyday. Basically, writing The Daily Links every day was becoming monotonousness. However, I knew I still liked the idea, so I didn't want to totally stop doing them.

Thus, we've decided to continue our links post on The Daily Wiz, but we will only be posting them twice a week, which means the quality should be better, seeing as I will only be focusing in on two of these a week. Since these collection of links won't be posted every day like they used to be, changing the name from The Daily Links to something else was a must. Joe initially brought up the idea of calling these posts "The Digital Crawl," as a way to pay homage to everyone's favorite Zimbabwean striker, Vitalis "Digital" Takawira.

For those that aren't familiar with Takawira's famous goal celebration from his Kansas City Wizards hey day, it was called "The Digital Crawl," and it was simply amazing. After scoring a goal, Takawira would get down on all fours and crawl on the field. His team mates would then join in. One of the real tragedies in this world is the fact that The Digital Crawl is no where to be found on YouTube, essentially robbing the younger generations of experiencing all that was Vitalis' claim to fame.

So we pay homage here on our blog, with the hope that one of Sporting Kansas City's current players will bring the Crawl back to Kansas City (CJ & Kei, I'm looking at you).

Anyway, seeing as there's lots to talk about, on to the links:

First things first, the talk this past week was the Landon Donovan / Clint Dempsey "show down" when Everton took on Fulham in the Barclay's Premier League. Donovan's Toffees defeated Dempsey's Cottagers 2-1. Luke Lohr over at MLSReserves.com takes a look at the "Who's better, Donovan or Dempsey?" debate, and I have to say that I totally agree with Luke's piece.

Why do we always feel the need to debate who's the better player? We do this with every sport. Who's better, Kobe or Lebron? Brady or Manning? Crosby or Ovechkin? And in American soccer, it's Donovan or Dempsey.

The truth is that they are two completely different players, and therefore, it's impossible to really say just who is better. Sometimes I wish we would just enjoy watching these guys play, without feeling the need to try and get to the bottom of who's better. The answer is that we'll never know. It's like comparing Michael Jordan to Wilt Chamberlain. They're too different of players to even try.

Looks like things are going to hell in a hand-basket over in Philly. First goalkeeper Faryd Mondragon left the Union to join Deportivo Cali, the club where he began his career. And now, star forward Sebastien Le Toux has been traded to the Vancouver Whitecaps.

While I don't see the Mondragon transfer as a deal breaker (I think Zac MacMath will get the job done), I'm totally lost about the Le Toux deal. Think about this fact: only Dwayne De Rosario combined for more goals and assists over the past two seasons than Le Toux in all of Major League Soccer, 46 to 45. In short, Le Toux is a beast. And it's not like the guy is old. He's only 28, and in the physical prime of his playing career. I just don't see any one on Philly's roster that can even come close to what Sebastien brought to the table.

Le Toux shares his side of the story here, where he claims that Philadelphia pushed him towards Bolton, because they wanted the money a Le Toux transfer would bring.

At least Philadelphia ended up keeping Roger Torres. Still, it's stories like the Le Toux saga that make me glad to be a Sporting fan.

I don't know why I'm complaining in the least bit. I should be elated. It means Sporting will only have to face Le Toux once this season, and it means in all likelihood that the Union won't be nearly as good in 2012.

So the "Kris Boyd" to MLS rumors were true. The Scottish striker signed with the Portland Timbers as a designated player a couple of days ago. SKY Sports was reporting that Kansas City was interested in the 28 year old's services as well. One interesting aspect of this whole deal, which Mike Kuhn from Down The Byline nailed, was that Portland DID have to send a 2013 first round pick to the Houston Dynamo, as they held Boyd's Discovery rights. As always, a nice call from Mike.

In Sporting related news, midfielder Luke Sassano signed a new deal with the club a few days ago. You have to be happy for Luke for a couple of reasons; 1, he seems like a great guy, and 2. it pretty much means the Sassano sandwich will still be around at Pandolphi's Deli.

All joking aside, I think Luke is a solid depth player for Sporting, so hearing that he'll be around for a while longer is good news.

Sporting beat writer Steve Brisendine has a good article over at MLSsoccer.com about Kansas City's three USMNT players. After watching Teal, CJ, and Graham in the two friendlies, I have to say I came away most impressed with Sapong, even though he didn't have a chance to feature much coming in as a sub in both games.

Finally, here's a good interview with Takawira from a couple of years ago, where he describes how he was given the nickname, "Digital."

It came from my first club team, Dynamos, in Zimbabwe. When you graduate to the first team, the supporters give you a nickname. It was they who gave me that name. Perhaps because they thought I was so quick and controlled on the ball, like something digital, like a computer or camera.