Share All sharing options for: A Quick Rundown of Former MLS Rookie of the Year Winners & The Dreaded Sophomore Slump

I think it's safe to assume that many fans are looking for a big second season from Sporting Kansas City forward CJ Sapong. Sapong had quite the rookie year after being drafted 10th overall in the 2011 MLS SuperDraft. He was ultimately named MLS Rookie of the Year, after scoring five goals, and adding five assists in 34 matches during the 2011 regular season.

No doubt, I anticipate Sapong will have a very good year in 2012 as well, but as I was attempting to project just how well I think CJ will do this season, it did get me thinking about a certain dreaded term in the sports world.

Wikipedia describes the term "Sophomore Slump" as " an instance in which a second, or sophomore, effort fails to live up to the standards of the first effort. It is commonly used to refer to the apathy of students (second year of college or university) the performance of athletes (second season of play), singers/bands (sophomore album), television shows (second seasons) and movies (sequels/prequels)."

While using the term sophomore slump for burnt out students, redundant TV shows, and less-than stellar movie sequels surely makes sense, I've most commonly heard the term used in reference to music, and to athletes.

Pop Culture Example (or just a poor excuse for me to insert music into the conversation): In 2003, rock band The Darkness released their hit record "Permission to Land," a record that still holds a place in my heart as one of the best (although over the top, and borderline pardody) rock records in a good long while. You probably remember them most by their song "I Believe In A Thing Called Love." The record was a huge success, selling over 1.3 million albums and launching the band into star status.

Which is why when the band released their second album, "One Way Ticket To Hell.. and Back" in 2005, expectations were running high. Needless to say, "One Way Ticket" failed to deliver on such lofty expectations, and the band subsequently fell apart not much later on (although the band is currently attempting a comeback).

Examples of the dreaded sophomore slump can be found in all of the major American sports. Players that had amazing rookie seasons only to have their second year in their respective sports fail to meet expectations.

But what about in MLS?

I decided to take a look back at the past winners of the Rookie of the Year award to see how each fared in their second season in Major League Soccer, and to see how many of the award winners might have went through their own sophomore slumps along the way.

Here's is a list of the former MLS Rookie of the Year winners, along with the statistics from their rookie campaign, and the following season.

In his second season, Najar once again scored five goals (same as '09), but this time added six assists (one assist in '09) for DC. He failed to be named DC's MVP or Golden Boot winner in 2011 (both of which he was awarded his rookie year), but I think he deserves a pass given the fact that MLS MVP Dwayne De Rosario plays on the same team.

In his second season in MLS,Gonzalez was a finalist for MLS Defender of the Year . He was also named to the MLS All-Star team and the MLS Best XI, scoring three goals for LA and leading the Galaxy in minutes played and regular season games played.

Gonzalez has turned into one of the best young American center backs in MLS, having won the 2011 MLS Defender of the Year award. Gonzalez recently went on loan to German side Nurnberg but suffered a torn ACL during his first training session with the club. He's expected to miss a majority of the 2012 season.

Franklin missed much of the 2009 season with a torn right hamstring. He featured in only 13 matches for LA during the regular season, but did manage to play in all three games for the Galaxy in the postseason.

Franklin is now LA's starting right back, and recently signed a new contract with the Galaxy. Considered one of the better right backs in MLS.

After a year plus with Toronto FC, Edu signed a five year contract with Scottish Premier League side, Rangers FC, where he has scored nine goals in 84 appearances. Edu has also featured for the United States Men's National Team, scoring one goal in 29 appearances.

Bornstein appeared in 23 matches for Chivas in 2007, scoring one goal, and adding an assist. He was named to the MLS All Star game, the first Chivas USA player to ever do so.

After the 2010 MLS season, Bornstein joined Tigres de la UANL of the Primera Division in Mexico, where he played in seven matches in 2011.

Parkhurst was a part of a Revolution defense that allowed only 35 goals in 32 matches in 2006. Was named to the MLS Cup Playoffs Best XI, and was named MLS Humanitarian of the Year.

Parkhurst would go on to win the MLS Defender of the Year award in 2007, before signing with Danish side FC Nordsjaelland in 2008, where he has made 94 total appearances for the club.

In 2005, Dempsey featured in 26 matches for the Revolution, scoring 10 goals, and adding nine assists. New England would make it to the MLS Cup Final where the Revs fell 1-0 to the LA Galaxy.

Dempsey would go on to score eight more goals for New England the following season, which would end up being his last in MLS. Dempsey transferred to English Premier League side, Fulham, where he has now scored the most goals by an American in Premier League history (36).

After scoring 11 goals in his rookie season, Ralph repeated the feat the following year, while also adding 3 assists for the Fire.

After the 2004 campaign, Ralph went on to play for Russian side FC Rubin Kazan, where he only scored twice in 25 matches for the club.

Ralph attempted to make a comeback to MLS in 2010 with the New York Red Bulls, but he was never offered a contract. 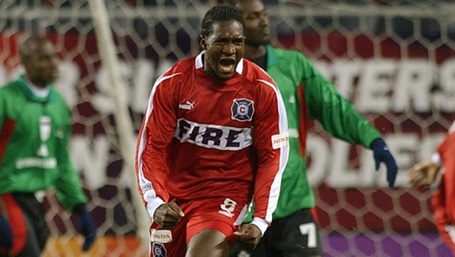 Damani Ralph: More proof that the grass isn't always greener on the other side of the pond.

Martino had a somewhat disappointing season in 2003, scoring two goals and notching four assists while featuring in 22 games for the Crew.

Martino played with the Crew until 2006, when he was traded to the LA Galaxy, where he would play in 35 matches and would score three goals.

Martino retired in 2008 due to numerous injuries.

After scoring 8 goals in his rookie campaign, Faria would go on to net 14 total goals in 2002, while adding five assists.

Faria was sent to the Chicago Fire as part of compensation to bring head coach Bob Bradley to New Jersey, and was never the same. Faria would not score at all in 2003, although he did win a championship with the San Jose Earthquakes that year, after being dealt from Chicago.

Bocanegra would miss 12 games in 2001 with a sprained ankle, and would only play in 15 total matches for the Fire. He still managed to score a goal, and add two assists.

Bocanegra would go on to win the MLS Defender of the Year award in both 2002 and 2003 before signing with Fulham in 2004 where he played until 2008. He would also play for Rennes, Saint Etienne, and is currently with Rangers FC.

He is currently the USMNT"s team captain, and has earned over 100 caps in his international career, one of only 12 US players to do so.

Heaps was named an MLS All Star in 2000, scoring five goals and adding six assists for the Fusion, but was traded to the New England Revolution before the 2001 season.

Heaps would eventually become the all-time leader in appearances for the Revolution at 243 games over his eight year career with the team. Heap played on all four New England teams that made the MLS Cup Final in 2002, 2005, 2006, and 2007. Remarkably, they would fail to win the championship in any of the four finals.

Heaps was hired as the new coach of the Revolution in November of last year.

After scoring 4 goals and adding 8 assists in his rookie campaign, Olsen would improve his 1999 numbers with 5 goals and 11 assists. United would win the MLS Cup that season.

Olsen would finish his MLS career (all with United) with 29 goals and 49 assists. Olsen retired from soccer in 2009. He was hired as head coach of DC in 2011.

Duhaney was originally drafted in 1996, but missed the entire season due to a knee injury, so 1997 was actually considered his rookie season.

Duhaney was traded from Tamba Bay to the MetroStars in the middle of the 1998 season after playing in 16 games for the Mutiny. Duhaney scored a goal and three assists that year between the two clubs.

After winning the first ever MLS Rookie of the Year award in '96, Ralston scored 5 goals and added 11 assists for the Mutiny the following year. He would spend six seasons with the Mutiny, and would end up being Tampa Bay's all-time leader in games played at 177.

After Tampa Bay was retracted after the 2001 season, Ralston moved on to the New England Revolution where he would go on to score 42 goals, and notch 73 assists in his nine seasons with the club.

After his time with MLS, Ralston briefly played for AC St. Louis, a USSF Division 2 club. He returned to the Revolution in 2010, but suffered a dislocated elbow that ended his playing career.