Share All sharing options for: Sporting KC's 2012 Season Preview and What You Can Expect From This Year's Campaign

The 2012 season for Sporting Kansas City is so close now it is simply unbelievable. The time has seemed to creep by endlessly from when we last saw the LA Galaxy lift the trophy, to where we are today -- just 4 days from watching Sporting KC in MLS action for the first time in almost 4 months. Yet, from the Chiefs indoor training facility, to Arizona, to the Disney Pro Classic it has all gone by so fast. Some may argue however that it is has not been long enough for Sporting KC to get the bad taste out of their mouth from last year's campaign. Yes, this year will be one of redemption. After barely missing out on the MLS Final last year to the Houston Dynamo, Sporting KC has remained somewhat stagnant in their offseason transactions compared to previous years when Peter Vermes revamped a much older and declining squad. One of the main reasons for the low profile being kept by the club during the offseason is due to Vermes and his staff having finally constructed the core of a young, but not necessarily inexperienced side. In fact, Vermes and Co. have managed to retain all 11 of those starters from the Eastern Conference Final and are certainly shaping up to be one of the top teams, not just in the Eastern Conference but in the whole of MLS -- something I tend to forget.

(read the rest of the preview after the jump, trust me, you won't be disappointed)

But one thing that I haven't lost sight of is how we currently do not have a DP listed on the roster going into the 2012 campaign. After losing Omar Bravo in a December transfer to Cruz Azul, and having waived Jeferson around the same time, the club has been without a Designated Player for a good three months now and with it being the offseason - rumors were swirling that we would eventually sign one. Alas, we haven't, nor does it seem as if we will sign a DP at this stage of the season. But come summer we could easily sign a DP when they are almost half-off the salary cap.

Despite not having a DP, this team is still absolutely stacked to the ceiling with depth at almost every position. Of course the striker position would certainly be the gem of the whole crown with center forward center forward canidates like CJ Sapong, Teal Bunbury, Soony Saad and Dom Dwyer charging down the middle of a three-pronged attack. And if that wasn't impressive enough, Kei Kamara and former San Jose Earthquakes player Bobby Convey are stationed on either wing to round off an ever-impressive forward line. Sporting KC's central midfield depth will also be key to this season, Graham Zusi, Julio Cesar and Roger Espinoza being the highlights of Peter Vermes' three-man midfield.


The one place that Sporting KC could be considered a little weak depth-wise however would be at the back. Longtime second string shot-stopper Eric Kronberg recently succumbed to a lower back injury that could keep him out for 6 weeks. That's not a insignificant development as it essentially puts veteran goalkeeper Jimmy Nielsen just one suspension or injury away from throwing 18-year-old Jonathon Kempin into the MLS limelight.

The center back position has also been at question for Sporting KC and while a pairing of Matt Besler and Aurelien Collin in the middle of defense is one of the best center back partnerships in all of MLS, there really isn't much behind them. Lawrence Olum and Cyprian Hedrick are the only two other central defenders currently on the roster and between the two of them have amassed just 1 MLS appearance.

All-in-all, the rapidly growing fan base around Kansas City expects a lot from this young Sporting Kansas City side, and why shouldn't they? With the guys on this roster, and the facilities and staff at our disposal we should easily be contending for the MLS Cup Final, something that would have been laughed at should I of said it just 2 or 3 short years ago. The turnaround for this team from when they used to be called the Wizards, to now, is absolutely astonishing, and the 2012 season could just be the club's best season yet.

While the LA Galaxy and the Seattle Sounders are arguably the top two teams in the MLS Sporting KC is still a powerhouse in the East and will probably end up being the 3rd best club in the league. As far as the post-season goes, qualifying for the playoffs is the bare, bare minimum, and getting to the final of both the Eastern Conference and the whole league will certainly not be viewed as an over-ambitious goal for Sporting Kansas City.

The US international that was ever so vital to Sporting KC's midfield last season will most likely look to extend his tally of 5 goals and 9 assists from last year. His vision and free kick prowess will again make him one of the most dangerous attacking midfielders in the league. Combine that with the fact that he will in all likelihood be the starting attacking midfielder week in and week out for Vermes and you have yourself one of the best candidates for MVP of the season for Sporting KC.

This prediction may confuse a large amount of you, but this season could just be the season when Teal Bunbury makes a name for himself(again), regains his confidence, and has another break out year for Sporting KC. Here's why I say this: Last season was ruthless for Teal, he started the season with an arm injury that kept him out of the preseason and into the beginning of last year's crusade, he played well after that but tapered off towards the end of 2011. I tend to believe it was the massive amount of pressure from the media, coaches, and players that was placed squarely on Teal's shoulders that ultimately hindered his season. However that's not to say it was a bad one all-in-all for Teal, he was the team's joint top scorer with 9 goals last year. All I'm saying is this season things have calmed down quite a bit, and expectations for him have leveled off too, will it motivate Teal? Yeah, it probably will but as it is with all predictions only time will tell.

While I realize Saad is no longer necessarily a 'rookie' to this squad technically he's only been here half a season after Sporting KC won him in a weighted lottery held by the league to see where the sparkling 18 year old talent would go. And I believe he is only now beginning to understand Vermes' 4-3-3 system after seeing very limited 1st team action last year. While the coaching staff won't want to push the young American into any pressure he is basically the 3rd string striker and will most likely be part of the gameday 18 and travel with the club to away game fixtures. He showed us that he can put a ball in the back of the net last season, and I don't expect anything less this campaign, he's a born finisher and with Teal gone for a part of the season with the US Men's National team I expect he could earn some valuable minutes this year. 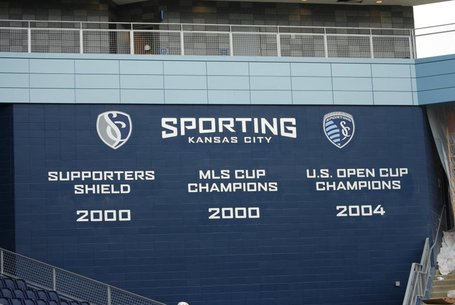