Today while looking ahead at the schedule for Sporting KC I noticed that there seemed to be a scheduling farce. I was looking at the month of July and nestled in between the New England game and the Columbus game was a game against reigning Ligue 1 champions Montpellier HSC on the 24th.

This was strange to me seeing as as far as I can remember Sporting KC hadn't said anything on their twitter handle about the match and when I checked to see if it was somehow hidden inside the "news" category on the website there was nothing.

I do recall the name being whispered around the Sporting KC world however when ticketmaster also had a scheduling farce as they had the tickets for the Montpellier match listed.

When Sporting KC announced that Stoke City would be coming to LSP, a side that is more known for its physical type of play than anything else, I was a bit disappointed. It seemed as if the club had taken a couple steps back after having played the Barclays Premier League Champions Manchester United in the summer of 2010.

But if this scheduling accident does prove to be true, which in all circumstances it looks as if it will, then Sporting KC will again welcome a champion back to Kansas City in the way of Montpellier HSC. 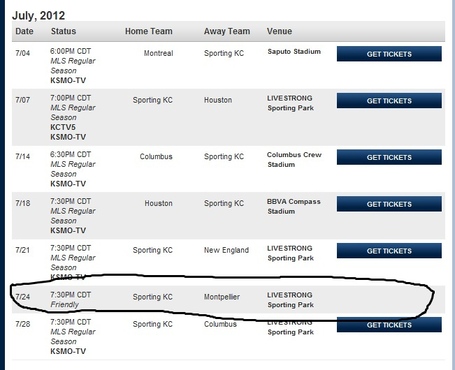