Poke the Bear and Put in the Reserves: Analyzing Sporting KC vs. Dayton

Share All sharing options for: Poke the Bear and Put in the Reserves: Analyzing Sporting KC vs. Dayton

Sporting Kansas City will host USL-Pro side Dayton Dutch Lions tomorrow at LiveSTRONG Sporting Park in a quarterfinal match-up of the Lamar Hunt US Open Cup. There is one simple rule when an MLS side faces a lower division team in the US Open Cup: Don't Poke the Bear Cub. Time and again we have seen clubs underestimate their opposition and line up a mash of reservists and out-of-position starters against lightly regarded opposition and lose. A record nine MLS sides have lost to lower division opponents this year. This strategy is sometimes due to a manager's barely concealed disdain for the tournament (cough... Bruce Arena... cough) but it is most often a failed gamble to scratch out a win while resting starters and giving back-ups some match day experience. 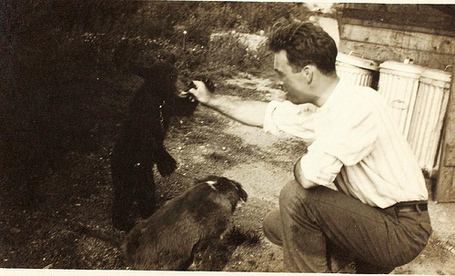 Kansas City is no stranger to underestimating lower divisions, gambling and losing to sides like the Chicago Sockers, Nashville Metros and the (argh!) Richmond Kickers. We should know better at The Daily Wiz than to poke the bear cub: respect history, respect the opposition, overreact to their 4-0 win the same weekend as our 0-4 loss, obsess about the ways this team can break down our side, and worry about how this game will effect the line-up for this Friday's regular season match against Chicago Fire. We've done enough research. We're poking the bear. Sporting KC should start the reservists in the quarterfinal of the US Open Cup against Dayton and not look back.

Dayton, supported by the Dutch side FC Twente (hence the "Dutch" Lions name) is philosophically tied to the free-flowing technique and adaptability typified by Holland soccer. It is a fine approach to the game but it has not led to results on the field for the Dutch Lions. They sit near the bottom of the USL-Pro standings with a 1-7-5 record and scored just 5 goals in their first 12 games of the season.

Game film on Dayton is limited but there is a recent game against the LA Blues here if you want to see them in action. I went to Dayton a few weeks ago to check out the Dutch Lions in a USL-Pro regular season match against the Pittsburgh Riverhounds. Full disclosure: I only caught the last 25 minutes of the game due to work issues. Even though I had an abbreviated time to look them over, I think Dayton will have a great deal of trouble matching up with Sporting KC. Their keeper made a number of solid saves, but their defense was caught off guard on several counterattacks and was routinely beaten on crosses. I was expecting some form of free play or Total Football by the Dutch Lions, but I mostly saw a team that was struggling to put together good movement through the midfield and leaving their forwards with little to do. The defenders were often a step slow on counterattacks. They have a weapon in striker Gibson Bardsley and a good keeper in Matthew Williams, but I think this side will have a very, very difficult time against the speed and the counter-and-cross tactics of Sporting KC.

There are also questions about Dayton's depth, conditioning, and ability to make adjustments as the game progresses. Can this team play a full, hard ninety minutes against Kansas City? Consider when Dayton has allowed goals in their games this season (both regular season and USOC): 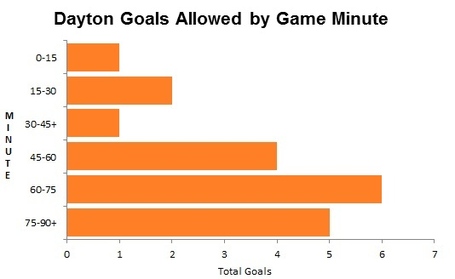 After a respectable showing in the first half, this team's defense has repeatedly coughed up goals in the second half. Seventy-five percent of their regular season goals and all of the goals they've allowed in the US Open Cup have occurred in the second half.

Compounding their apparent conditioning/adjustment issues is their schedule. Dayton may well end up playing its reservists in this game. Fans have been concerned about how the busy summer calendar affects Sporting Kansas City, but Dayton has three games in six days. Although Dayton produced a big win against Wilmington this past Saturday, their coaching staff is likely feeling pressure to repeat these results in league play. If their staff assumes they will have a hard time winning in this game, it would be difficult to understand why they would hamper their ability to win later this week by having their regular starters play for 270 minutes in less than a week.

Route to the Quarterfinals

Forget Cal FC, the biggest upset of the US Open Cup was the Columbus Crew finding a way to lose 2-1 to Dayton in the 3rd Round of the tournament. Columbus has shown limited creativity on offense this season, but they have quietly put together a good record through the strength of their defense and the solid goalkeeping. It should have been enough, but a few late Crew lapses led to a very un-Dayton like comeback win. Dayton also pulled out wins against lower division PDL sides Michigan Bucks and Chicago Fire Premier. In a way, they are like the USL-Pro version of Toronto FC under Aron Winter: Dutch philosophies, bottom of the standings in their league, but unexpectedly deep runs in tournaments.

How should Sporting KC respond strategically to Dayton? Bring in the reserves and have faith that they will get the job done. Sporting KC wants this win badly, but the calendar is too full and the injury report is too long to use starters in anything but an emergency role. If Besler can play, then sixty minutes should be enough to get him into form. Putting the game in the reserves hands is a stark challenge: if the backups can't collectively find a way to win against this Dayton side with so many players on Sporting's roster needing the rest, then they should seriously consider if they have what it takes to win at the MLS level.

I have a lot of faith in the reservists. I know they can do it. Here's a stick. Go poke.

One final note: the fans I met in Dayton were great, and this three year old organization is doing a lot of good work to grow the game in the Dayton area. I ask all of you to welcome Dayton fans who make it to Kansas City. GO TO THE GAME and support Sporting KC!