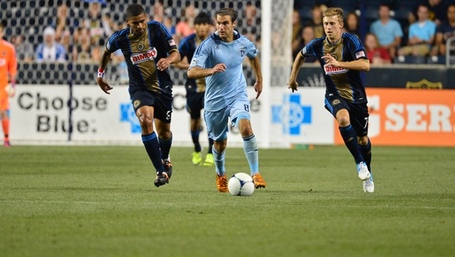 Jacob Peterson is turning out to be one heck of a signing for Sporting Kansas City head coach, Peter Vermes.

Peterson was able to score a header past Philadelphia Union goalkeeper Zac MacMath in the 65th minute that helped give Kansas City a 2-0 win over the Union, and saw Sporting through to their first US Open Cup final since 2004.

Graham Zusi added Kansas City's second goal in stoppage time, a 50 plus yard shot into a Philadelphia open goal that put the final nail into the Union's Open Cup hopes.

8,486 were on hand at PPL Park in Philadelphia to watch the semi-final match that would decide who would be play either the Seattle Sounders or Chivas USA in the final. Vermes made only one change to the Kansas City starting lineup that played the Houston Dynamo to a 0-0 draw last Saturday, opting to start Teal Bunbury at center forward instead of CJ Sapong. Paulo Nagamura once again started in place of Juilo Cesar in the Sporting midfield.

The match was the second time Kansas City has played Philadelphia in the past few weeks. The Union dismantled Sporting 4-0 on June 23rd at PPL Park. Sporting fans were hoping that Kansas City would be able to redeem themselves after that performance.

The first half hour of the match started out slow, as both teams looked to find their comfort level with the opposition, however, things settled down quickly after that as Sporting started creating some nice scoring chances.

In the 34th minute of play, Kansas City forward Kei Kamara played a low cross from the right side in front of the face of the Union goal, where a sliding Teal Bunbury was able to get his foot on the ball. Philadelphia midfielder Amobi Okugo was able to thwart the chance as the ball was played out of bounds for a Union goal kick.

Not long after, Kansas City left back Seth Sinovic played a nice lobbing cross into the Union box that was able to find Peterson, who headed a dangerous ball towards the Philadelphia goal. Union defender Carlos Valdes was eventually able to clear the ball out of danger.

Kansas City defender Aurelien Collin may have made the defensive play of the game right before halftime, as Union midfielder Michael Farfan played a nice pass to foward Lionard Pajoy who found open space for a shot behind the Kansas City defense. Collin was able to make a perfectly-timed sliding tackle that dispossessed Pajoy that ended the Union attack.

The second half turned into a chippy affair, as a number of players received yellow cards for wreck less challenges. Finding himself in a number of the skirmishes was Sporting midfielder Roger Espinoza, who seems to have a knack for enraging the opposition with his injury theatrics (Someone steps on Roger's toe, he falls to the ground and goes into an epileptic seizure).

As time went on it appeared that extra time, and perhaps, the dreaded penalty kick shoot-out might be needed to decide who would advance to the final, but in the 65th minute of play Jacob Peterson was able to head a long Graham Zusi free kick past the outstretched arms of MacMath and into the back of the Union net.

It would be a lead Kansas City would not relinquish.

Sporting was able to withstand a barrage of Philadelphia attacks, as the defense held strong. In stoppage time, as the Union were becoming desperate to equalize MacMath started playing higher and higher up the pitch, hoping to facilitate a Philadelphia attack. leaving the Union with an open goal.

When the Union lost possession near mid field, Zusi, realizing that MacMath was way off of his line, fired a shot from over 50 yards that rolled into the back of the Union net.

2-0. Final. Kansas City will play in the US Open Cup final for the first time since 2004, the only year they have won the tournament.

1. Matt Besler is the glue to the entire Kansas City defense. I'm as excited as anyone that Aurelien Collin will be playing in this year's MLS All-Star Game, but when all is said and done, Besler is the MVP of the back line. We saw what happened to the Sporting defense when Besler missed time due to surgery. Collin, for as good as he can be, isn't the most disciplined defender out there, and Besler's calming presence allows Aurelien to play the wild card role in the middle of Sporting's defense.

2. Jack McInerney is a future star. If not for some rather spot-on defending for Kansas City, McInerney may very well have had a repeat performance from that 4-0 drubbing Sporting took during their last visit to PPL Park. McInerney is only 19, and yet he is Philadelphia's most dangerous offensive threat. He gave the Sporting back line some problems tonight, but was unable to capitalize. The future looks bright for the Union forward.

3. Union forward Freddy Adu showed that he has some serious skills. There were a couple of times during the match where Adu did his best Cristiano Ronaldo impression, using a plethora of ball fakes, and skill moves to work his way around Chance Myers, and the right side of the Kansas City defense. Were some of the tricks pointless? Of course they were, but they were still fun to watch.

4. Aurelien Collin will miss the Open Cup final. Due to yellow card accumulation, Collin will be unavailable for the final. Aurelien was yellow carded for an off the ball foul in the 77th minute of play. The card gave Collin three total yellow cards in Open Cup play. US Open Cup rules dictate that a player must sit out after accumulating three yellow cards. Neven Markovic anyone?

5. Sporting KC will host the US Open Cup final on August 7 or 8, depending on who wins the other semifinal match between the Seattle Sounders and Chivas USA. Either way, it will be at LIVESTRONG Sporting Park.