It is the most thrilling build-up in every Sporting KC game. Bobby Convey or Graham Zusi walks methodically to the corner of the touchline. The Cauldron--energized by the aggressive play of Sporting KC and recalling how dangerous the team was last year on set pieces--starts to rhythmically clap and cheer to LMFAO's "Shots." While the curling touch of Zusi is still there, the satisfaction of a goal is largely lacking in recent months. The 2012 version of Sporting Kansas City has seen too many shots miss their mark.

Sporting KC's flurry of shots is no illusion. The team is currently on pace for the most attempted shots in MLS regular season history. Sporting KC will attempt 563 shots by the end of the regular season if they continue at their current shot rate. This is well ahead of any other team's pace and 75 more shots than any team in the past decade.

The Major League Soccer schedule has consisted of between twenty-six and thirty-four games since play began in 1996, but if you adjust all seasons to reflect a 34 game schedule, Sporting would still come out ahead of all teams, including sides that played at a time where rules promoted scoring, narrower fields, and leakier defenses.

This would be wonderful news if leading in shots equated to success. History shows a more erratic record for the league leader in team shots. Only the 2003 Chicago Fire ended up with the top record in the league. The current record holders for shots in a season (1999 Metrostars) finished in last place with 15 points total. While KC has led the league in shots, shots, shots four times in recent seasons; they ended with the team having the 5th, 8th, 9th, and 11th-best records in the league. Not exactly something to shout about.

Most of this shot-taking is part of a broader strategy by Peter Vermes. The shots are a consequence of an extremely aggressive game plan of possession, penetration in the final third, exploiting the flanks and crossing shot after shot with the hope of crashing a ball into the goal. When it works it makes for unstoppable soccer, when it doesn't it is a repeated exercise in frustration.

The Daily Wiz' recent series on Sporting KC's shooting woes have emphasized the idea of shot success. Shooting often doesn't matter as much as shooting effectively and exploiting second chances when they occur. Consider that Sporting KC recently dominated Chicago by a 27-10 shot margin, but it only took one effective counterattack by Chris Rolfe and Marco Pappa to seal a 1-0 result for the Fire.

Shown below are the two best and worst shot success rates in MLS, along with the league average in shot success. Sporting is next to the bottom, while Supporters Shield contenders RBNY and San Jose have been the most dangerous shooting teams in the league. I've included shot rates for the regular season winners of four European leagues for reference to show that top-level shot success rates in MLS aren't particularly extraordinary in a broader context. 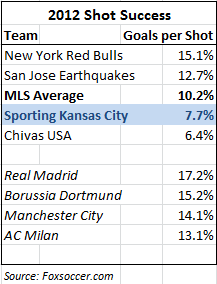 It appears that the best teams are finding the back of the net for every 7 or 8 shots taken at the least. If you look at the shot success rate of previous Supporter's Shield winners, you'll find that all of them ended with a shot success rate higher than this year's 10.2% league average. 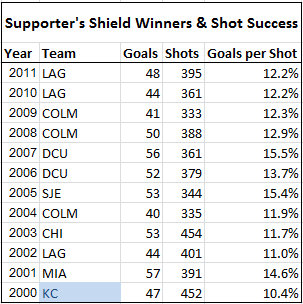 Every team scored at least once for every 9 shots taken, with the exception of the 2000 Wizards (a common exception in many MLS examples due to their ridiculously good defense compensating for other drawbacks). 2012 Sporting KC requires almost 14 shots to get the same result.

What does this say about the side for the rest of 2012? Things usually regress to a mean. It is highly unusual for a team to have such a good record coupled with poor shot success. Over time, you'll likely see these factors normalize by either having the team fall in the standings or by having the team go on a scoring run. I hope for the latter, and see these shots lead to goals, goals, goals.

Tomorrow I'll look at when teams are scoring goals, why San Jose is the most exciting team in MLS, and why Sporting KC may have the best temperment for a long playoff run.