Yesterday we looked at how Sporting KC is on pace to record the most team shots in MLS history, and how this is not necessarily a good thing. Today's statistical analysis looks at scoring tempo for the season, and how Sporting Kansas City may have corrected one of its biggest flaws from the 2011: untimely goals.

Scoring Goals: a Matter of Timing

Sporting KC is not one of the highest scoring teams in the league and has not scored a second-half goal in 10 of its last 11 regular season games. There are, however, other ways of interpreting game scoring than by halves. Below we have a list of every MLS team arranged from from most goals per game at top (San Jose) to to fewest goals per game. Goal scoring is divided into three parts to determine if a team scored in the beginning, middle, or ending 30 minutes of the game. On the far right we look at the standard deviation of the goal scoring, which is a quick and dirty way of measuring if a team has scored goals consistently throughout games or if they have occurred in spurts. Numbers closer to zero show a team has scored goals fairly consistently (Houston Dynamo & Chivas USA for example) while numbers in red show teams who have scored goals in spurts. For the stat heads there is a positive covariance with these numbers, so the numbers matter less than the relationship between teams. 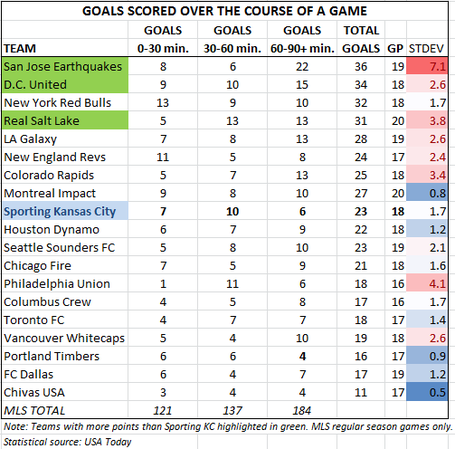 Sporting KC is in the middle of the pack in goal scoring over the course of a game, but it is interesting to find they are the 4th highest scoring team after 60 minutes. The statistics reflect an aspect of Vermes strategic methods. More often than not Sporting KC is in the lead after 60 minutes. At this point the team has less of an incentive to score a goal and more of an incentive to preserve a lead. Here lies an underlying feature of the Vermes system in the late game: aggression, possession, and repeated shots anywhere close to the 18 yard box. This approach not only provides opportunities to score, it also has the side-benefit of wasting time if the shot is not successful--time the opposing team could use to establish possession and get a shot on goal.

Side note: look at San Jose! Of 24 goals scored in the second half, an astounding 22 of them have occurred in the final 30 minutes of the game. Their scoring proficiency in the last 30 minutes alone exceeds total goals scored by eight teams in the league. It is a big reason why they have an MLS Best 3-3-2 record when trailing at the half.

Another interesting statistical note: Sporting KC has a fairly even distribution of scores in the opening, middle, and ending thirds. Sporting KC has been relatively consistent, which bucks the trend of many teams. Is this beneficial? After all, the teams with the most goal spurts (shown in red) tend to be the ones that score the most goals. The stats show a marked increase in goal scoring in the final 30+ minutes of the game. Sporting KC is one of only two sides that have scored the fewest number of goals in the final 30 minutes of the game. How has this team found its way to first place in the Eastern Conference? Let's look at goals allowed in the beginning, middle, and end of games. 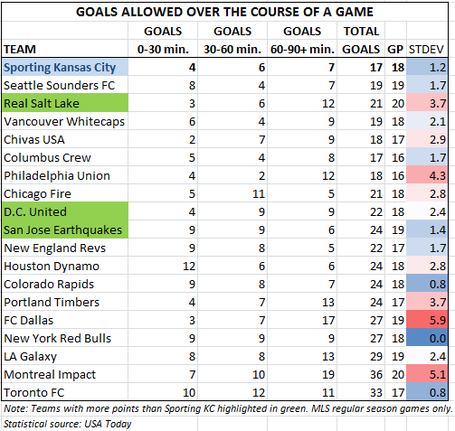 Sporting KC compensates for this relative dearth in goals by preventing goals as well, and does so equally throughout the game. Gone is the team from 2011 that allowed a surprising number of goals in the last 30 minutes of the game. It is also a reflection of the Vermes strategy: possession, aggression, and keeping the the opposing side from setting up good shots, even if it means your side doesn't set up good shots.

San Jose leads MLS in points right now after some incredible come from behind victories and offensive prowess. It makes for entertaining soccer, but which would you rather have in the postseason: A team that tends to fall behind and has to rely on its offensive prowess to gather a win, or a side with solid defense that can score as well at the beginning of the game as it can in the end? San Jose's fall-behind-and-score-a-jillion-goals is not the most sustainable strategy to win a game, particularly when you have a sequence of postseason games you must not lost in order to get a chance at a title.

The team has matured, and it's not just the statistics that reflect this. Matt Besler described this season's approach succinctly in yesterday's Fox Soccer article from Ives Galarcep:

"In the (2011) Eastern Conference final we were too anxious, and we wanted to go out and win the game right away. Here we showed that we were patient.

"There’s 90 minutes to win a game. You don’t have to win it in the first 30 minutes. We were patient and I think it was just a good performance by us."

It was a fitting note against Philadelphia, a team that has a single goal in the opening 30 minutes of regular season play. For all the concerns about shots, maybe the best thing Sporting KC can do is continue to play their game.