One of the great things about being a Sporting KC fan are the complementary tickets to away games. It's a great motivation to go out and support the players in venues hundreds of miles from Kansas City.

I made the trip out to Columbus to watch this weekend's Sporting KC--Columbus Crew game in person. Here are my observations of the Columbus Crew, their grounds, and the game experience. 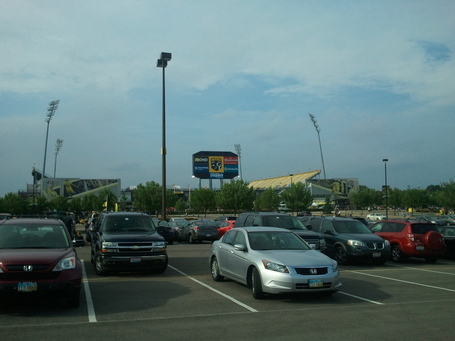 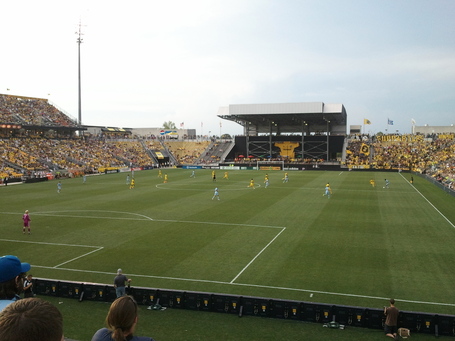 Crew Stadium view from the visitor sections on the south side. The Crew Supporter's groups can be seen just to the right of the bandstand.

The Stadium - I'm apparently one of the few who like Crew Stadium in 2012. Is it LSP? Not even close, but it's not a fair comparison. As a comparision, it reminds me of Kansas State's Bill Snyder Family Stadium minus 40,000 seats. Nothing is exceptional, but you can move easily about and there's not a bad place to watch a game either. There are nice banners showing some of the great moments in Crew history, decent concessions, wide concourses and party decks, and good seats for visiting fans. The only big strike against the stadium is the band stage at the north end (a crime at many MLS venues) which makes the whole experience of a game feel like a pre-show to a Def Leppard concert.

Mostly, I also like the historical fact that it is the first soccer-specific stadium in the United States. Consider how big of a risk it was to begin construction on this stadium back in 1998. The Hunt's committed millions for a project in a mid-sized market in a league with questionable long-term viability. There were reasonable compromises to the stadiums features, but this place solidified the foundation for the league we follow. I also think this blandish stadium with few bells and whistles will age well. It will feel more classic as time goes by. If LSP is the "Wembley" of MLS, then Crew Stadium could end up the "Wrigley" of MLS if they do it right. Just get rid of the bandstand.

Sporting KC Fans - There were about 30 Sporting KC fans in attendance, and they were all good people. Props to

The Stadium Special - $1 beer and $1 brats. I expected weaksauce brats and beer served in thimbles, but it was a solid 6 oz. of beer and palatable brats. As far as I knew there were no restrictions on the number of beers you could purchase. I saw one fellow with a tray of six beers. The one catch was that the beer was sold in the plaza outside the stadium, but that's an easy compromise.

The Crowd Response to $1 beer night - This combination would be a recipe for drunken disaster in Kansas City (and most places) but I didn't notice any rowdy behavior in the stands. A credit to the fans for enjoying the game and not bringing unattractive attention to themselves.

The Game - In case you haven't heard, the good guys won. Columbus was the ideal team to face after a series of tough matches every three to four days. I wish Sporting had done a better job of possessing the ball, but the defense was pretty solid for most of the game. The Crew play a step slower than most, and Sporting was able to sit back a lot more and expend less energy while creating some very good counterattacks.

How much did Sporting favor possessing the ball on the right side? Check out Jimmy's distribution chart: 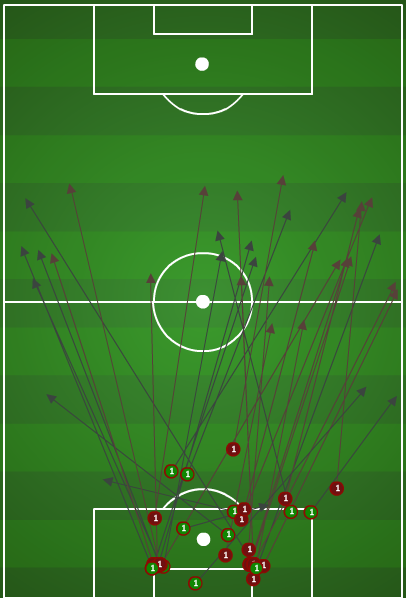 I can't complain too much, but for the most part guys were stranded on the left side after the first ten minutes of the game.

Getting to the Stadium: MoDOT would be proud--I doubt the Ohio Department of Transportation could devise a more confusing system of detours and closings from the highway to the stadium. It was as if they were at war with soccer and wanting to cut off Crew Stadium's supply network. This was no fault of the Crew. The final piece of finding an entrance and figuring out where to park could have been a bit more logical as well. Also: shelling out $10 to park wasn't cool. Sporting fans are very lucky to have free parking to games.

Tickets: You would have thought the ticket office had never experienced giving tickets to an away group. It took Shinguardian and his group two hours to get their tickets. Credit to Sam Pierron at Sporting Innovations for attempting to sort out the original mess, and for attempting to solve our issues at the box office.

The Crowd Atmosphere: The announced crowd was somewhere above 17,000, but it felt much smaller. The rest of the fans were probably spinning around the highway detours. Columbus isn't the most thrilling side, and an early goal by the road team tends to deflate a crowd, but it was fairly quiet throughout the game. I never heard a stadium-wide chant, their Nordecke section chanted infrequently, and overall it felt like a relaxed night of soccer than a big-time game.

All in all, it's not a bad experience. This is my second road trip to see Sporting, having witnessed the 2-1 debacle against the Chicago Fire earlier this season. Although I liked having a LOT more KC supporters at the Fire game, I liked this stadium a bit more than Toyota Park. It's a solid, unassuming, midwestern experience at an MLS game. I'll be back again. 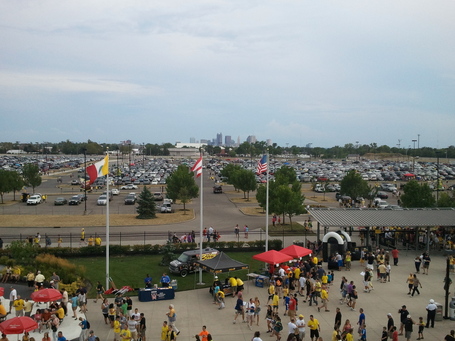 Shot from Crew Stadium south deck to the plaza area. Skyline of Columbus in the background.