When I was young I had many goals in life, never did it cross my mind to become a professional footballer. At about 25, I realized that they have by far the hottest wives and girlfriends in comparison to their relative hotness, and this even includes the wide disparity hockey has due to Alex Ovechkin. At this point of course, I was out of shape from all the drinking and probably about 15 years behind the learning curve on playing soccer. Ah, the things in life we fail at miserably. No offense meant to anyone I've ever dated, but kinda. Ummm...slightly NSFW Abbey Clancy after the jump and an insert from my preview discussing the world's lankiest striker. 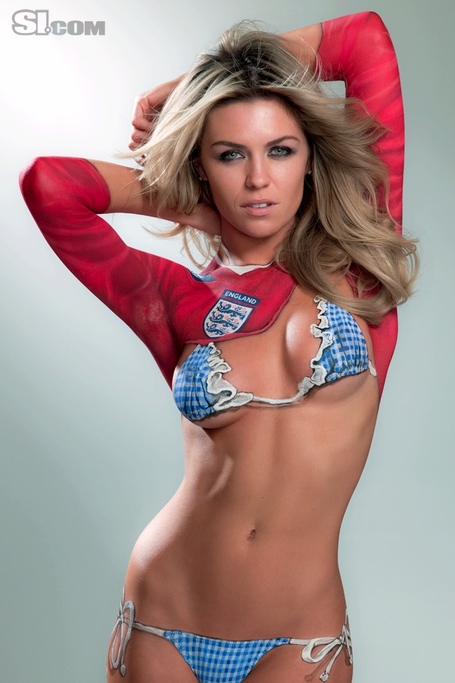 (Photographed by: Yu Tsai via i.cdn.turner.com)
(Let's all take a moment of silence for the man or woman who thought of painting swimsuits on women. They are most likely somewhere in the pantheon with the man who invented scotch and air conditioning repairmen,)

Peter Crouch Is The Only Player You Know; He's Really Tall

This is the awful line any American will be fed. They will tell you about his glory days with the English National Team (Didn't happen) or how he used to star for Liverpool and Tottenham (Kind of, but not really). They will tell you he's really good in the air (duh), and completely ignore that he scores some amazing goals with that clunky frame of his. This will suit you just fine, because really he's Peter Crouch. Don't worry, nobody feels sorry for him living with his image after seeing his girlfriend (now wife) body painted in Sports Illustrated (slightly NSFW) and he's stinking rich.

He does win an amazing amount of headers off goal kicks, which make his keepers look good at passing and him look awful at it. This whole team eats you alive on headers and aerial attacks, but possesses good speed from Jermaine Pennant and Matthew Etherington to beat defenders and supply Crouch. He may do this which will justify every dollar you paid to see the match.

Since this is a friendly and not likely to be the most thought inducing game, feel free to jump into anything Sporting KC related, soccer related, Alex Morgan body-paint related, or generally off-topic stuff. Maybe it's just me but non-international friendlies are boring as hell.