It was announced today that Sporting Kansas City had signed Barcelona youth product Oriol Rosell. Rosell spent 6 years at Barcelona but in the most recent season felt as if he did not get as many minutes as he deserved with the Barcelona B side(a team which is a division below the first team Barcelona and generally harbors Barca's youth players). Another big reason for the move was Rosell's wish to continue his studies in the states and will apparently be pursuing a degree in Business Administration.

Rosell's contract with Sporting Kansas City is worth two years, with an option of an additional two years following the original contract.

Rosell with his family before the flight, how presh. 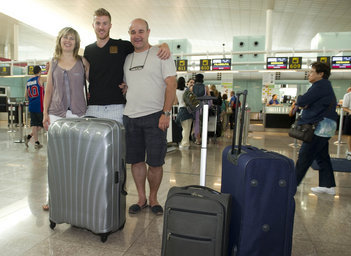