Share All sharing options for: Sporting KC Wins the US Open Cup Championship In Tight-Knit Affair With the Seattle Sounders

Sporting Kansas City won the US Open Cup last night for just the 2nd time in the club's history. In the process of doing so they defeated the defending US Open Cup champions, the Seattle Sounders. The Sounders were going for their 4th consecutive USOC title and had never recorded a loss in the tournament while playing as an MLS side, until last night that is.

Last night basically everything and anything that could ever happen in a soccer game did - PK's, goals, yellow and red cards, extra time, controversial handball decision, pulled back PK, ex-player securing a cup final victory for former team, etc. - it was the perfect game from a neutrals point of view.

But for the supporters of the two sides who were actually playing out the game it was gut-wrenchingly hard to watch as there seemed to be a twist to the game at every turn.

The match itself didn't even start until approximately 8:41 pm CT due to weather delays, 41 minutes after the scheduled time. But the weather could not dampen spirits and what was to be an eventful night kicked off with a double rainbow arching over LIVESTRONG Sporting Park. 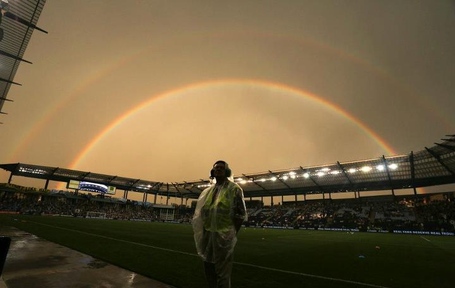 During the initial 20 or 25 minutes of the game Sporting KC were clearly the dominant side, riding the support of the home fans Sporting KC pressured the Sounders early on and forced them into a couple of mistakes and created a couple chances but nothing that resulted in a goal of course.

Eventually, Vermes' side stepped off the gas pedal a little bit - the majority of SKC's squad would go on to play 120 minutes after all and it'd be silly to waste so much energy in the opening stages - and the game became a lot more open. The end to end action saw Seattle receive a corner in the 30th minute that was almost turned in by the head of Eddie Johnson who rose well above his marker and powered a header towards the bottom right corner, but Nielsen was equal to the shot.

Johnson would again cause Sporting KC problems in the 35th and 42nd minute when he showed a quick pair of heels to get past Lawrence Olum on both occasions (who looked as if he was man marking Ej the entire night) and ripped a couple of shots towards SKC's net, the first was wide left while the second was blocked by the back of Matt Besler.

The next noteworthy incident of the match did not come until the 82nd minute when Teal Bunbury earned Sporting KC a controversial penalty kick. The young striker had received a well played through ball from left back Seth Sinovic towards the left corner and crossed in a seemingly harmless ball that, if had been left be, would most likely have not troubled the Sounders defense. But Zach Scott was in the wrong place at the wrong time and the ball hit the arm of the unfortunate center back. Head referee Ricardo Salazar wasted little time and pointed straight towards the penalty spot, awarding Sporting KC a penalty kick that Kei Kamara slotted into the bottom right hand corner (until a better replay is made available I can't say whether or not the call was justified, from my point of view sitting in the Cauldron there was certainly some contact between the ball and the arm but the referee was in a horrible position to make the call).

Just a minute later it was all tied up as Zach Scott connected with a Mauro Rosales free kick and headed the ball past Jimmy Nielsen who was rooted to his spot. Seattle had again scored at LSP in the dying embers of a match, however, unlike previous meetings, the goal would not turn out to be Sporting KC's nail in the coffin.

So the game went on to extra time and for the most part neither side could really get any good looks at goal.

Then came the penalties, and since I would probably over-complicate the description of them here's a nice little paragraph from Aaron Campeau over at SB Nation Seattle:

Seattle took a 2-1 lead early on after Michael Gspurning saved Roger Espinoza's effort to the left side of goal and Marc Burch hammered home his effort into the top center of the net. Things would stay at 2-2 after misses by Osvaldo Alonso, Graham Zusi, and Christian Tiffert. The controversy crept in in the 5th round, after Gspurning save Paulo Nagamura's effort only to controversially be called back for being off his line. Nagamura stepped up for the second time and hammered home his penalty, leaving Eddie Johnson as Seattle's last hope. Johnson's effort sailed over the bar, giving Sporting Kansas City the victory.