Breaking Down Graham Zusi's First Goal Against The Chicago Fire

It was a nice finish from the midfielder, but Kei Kamara was the catalyst for Kansas City's first goal on Friday night. A look at how the 11th minute goal came together.

Share All sharing options for: Breaking Down Graham Zusi's First Goal Against The Chicago Fire

Without a doubt, Sporting Kansas City's 2-0 win over the Chicago Fire on Friday night was a massive result. Not only did it clinch a playoff berth for Kansas City, but it also padded Sporting KC's lead over the rest of the Eastern Conference with only three matches remaining.

Sporting KC were able to dominate the second-place team in the East, and now have gone unbeaten in their last nine regular season matches.

Perhaps no particular play during the 2-0 victory better illustrates Sporting KC's dominance that night more than on Graham Zusi's 11th minute goal that put the home side ahead for good.

Let's take a look at how Sporting Kansas City were able to break down Chicago's defense and find the opening goal in Friday's win. 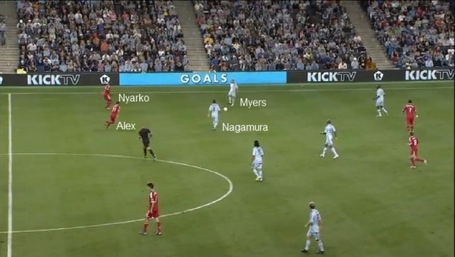 (Fig. 2) As he's receiving the ball, Nagamura appears to sense Chicago Fire midfielder Alex (No. 71) coming forward to close down on him. The first key element of the build up is Nagamura's one-touch pass to Sporting winger Kei Kamara (who's out of the frame in Fig. 2) down the right side of the pitch. If Nagamura takes anymore than one touch on Myers' pass, Alex will more than likely have that slim passing angle to Kei effectively closed down. The fact that Nagamura one-touches the ball with a nice pass to Kamara is what initially sets everything into place. 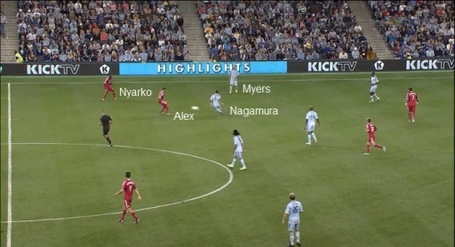 Fig. 3) Nagamura's pass to Kamara starts the attack, but the key to Sporting KC's success on this particular build up is Kei's ability to receive Paulo's pass, and turn past Fire defender Gonzalo Segares at the drop of a hat. Segares is playing rather aggressively, no doubt attempting to deny Kamara any chance of possessing the ball, but because Segares is playing so tight to Kamara, Kei's nice first touch and his ability to turn direction so quickly have put the winger in a position in which he excels better than almost any other player in MLS: out on the wing, with acres of open space, and with a yard or two advantage over the now trailing Segares. 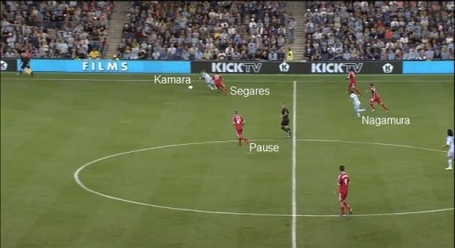 (Fig. 4) Here we see Kamara racing down the right side of the pitch, with Segares trailing. Sporting center forward CJ Sapong, and midfielder Graham Zusi race into the attacking third, looking to give Kamara options should the winger attempt to cross the ball into the Fire penalty area. Sapong races down the center of the field, with Zusi out wide left. Nagamura trails the play, looking to work his way into open space in middle of the field to give Kamara yet another option once Kansas City is closer to Chicago's goal.

Defensively, Chicago center backs Austin Berry (No. 22), and Arne Friedrich (No. 23) both appear to be primarily concerned about Sapong, while Fire right back Jalil Anibaba (No. 6) has Zusi covered out wide. Midfielder Logan Pause (No. 12) scrambles to put himself into position to mark up on Nagamura. 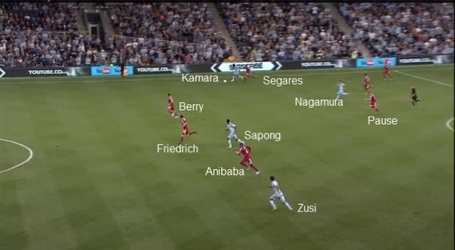 (Fig. 5) With Chicago marking up on Sapong, Zusi, and Nagamura, it appears that the Fire are in decent position to kill Sporting's attack. Kamara has space out wide, but with no clear-cut options to pass to. The next vital step in this particular attack is two-fold. 1. Zusi decides to stop his run towards the far post, and instead cuts back inside into the middle of Chicago's penalty area, and 2. Kamara crosses the ball sooner than the Fire probably anticipate that he will. Segares almost makes a fantastic defensive play as he attempts a sliding tackle to dispossess Kamara on the edge of the penalty area. Segares only misses by a matter of inches, allowing Kamara to get the cross off. The fact that Zusi cuts inward appears to be a surprise for Anibaba, as the Chicago defender assumes that Graham will continue his run out wide. 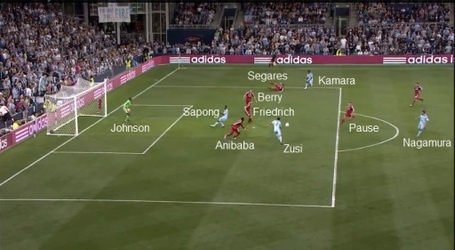 (Fig. 6) The fact that Anibaba miscalculates Zusi's run allows the Sporting midfielder the space he needs to not only receive Kamara's cross, but also fire a right footed one-touch shot. Berry and Freidrich, probably assuming that Zusi was still out wide and that Anibaba has him marked, continue to focus their attention on Sapong. Kamara crossing the ball when he does is actually a little surprising, as the winger would usually prefer to work his way further down the right side before cutting back in or firing a cross (Kamara has been known to hold on to the ball a little too long from time to time). Zusi's run inward, and Kei's early pass are ultimately what does in the Chicago defense. Extremely smart play from both Sporting KC players. 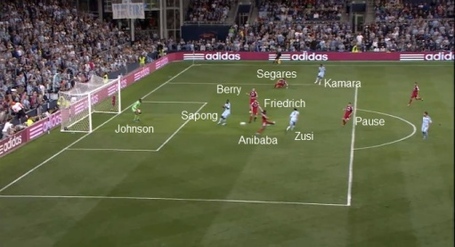 (Fig. 7) By the time Berry and Freidrich realize that Zusi has cut inside, it's too late. With just enough space in the middle of the Fire penalty area, Zusi's one-touch shot is low and perfectly placed into the bottom right corner of Chicago's goal. Anibaba attempts to block Zusi's shot, but he's a split second too late. A wonderful finish from the Sporting midfielder, and placed in a spot where it would be extremely difficult for Fire goalkeeper Sean Johnson to get to. It's also interesting to note that Zusi's shot just missed nicking Sapong, who was in an offsides position. Had the ball touched Sapong, the goal would have (or should have) been called off. A little luck our way, but I'll take it. 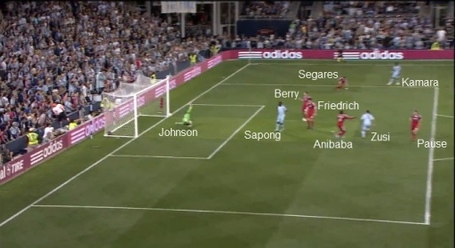