Matt Besler, Graham Zusi and Benny Feilhaber failed to impress in scoreless draw - but they didn't hurt their stock either.

The United States national team's 0-0 draw last night with Canada was no spectacle of sport. A small crowd watched a listless soccer team make indifferent attempts to break through a Canadian defense over and over again. It was as if the U.S. players had been replaced with slower, disengaged facsimiles of themselves.

The game was only notable in that it had no heroes and no villains, just a bland mob of players that neither provoked nor broke the Canadians. It is clear that the pace and play of this game was in response to a staff direction. Whether Klinsmann was hiding his plans for the first World Cup qualifier against Honduras next week or deciding that injury-free soccer was more important than creativity or tactical brilliance, everyone played it safe. The Americans attempted one tackle every four minutes, forced a corner every 18 minutes, and connected with a shot on target just twice. It was zombie soccer.

This game would be forgettable were it not for the participation of three Sporting Kansas City players in the game. Here are some thoughts on their efforts.

Besler played mistake-free soccer for 90 minutes, kept the back line organized well, and repeatedly connected with Brad Davis and Kyle Beckerman in the midfield. On the rare occasion when the Canadians pressed the attack, Besler prevented them from making any serious attempts at goal in his portion of the field.

He was less successful when he attempted to bypass the compact Canadian midfield with long passes to the right side of the field. Here is his chalkboard of unsuccessful passes in the game: 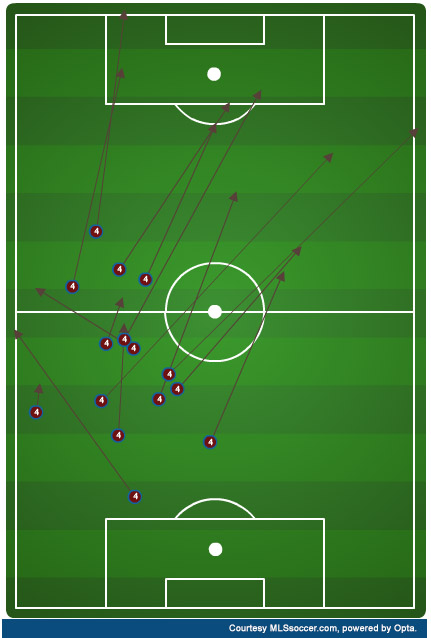 His targets on the right side were typically Graham Zusi, Benny Feilhaber and Brad Evans. This is a bit troubling considering two of them play for Sporting KC, but it is also possible that a lack of creativity by the defensive midfield and fullbacks forced him to chip passes deep to see if the forwards could force something.

I am a bit surprised that Besler did not attempt a throw-in during this game - Justin Morrow handled the throw-in duties on the left side. Perhaps Klinsmann was more interested in keeping him in the middle of the field to prevent a Canadian counter-attack, but his long throws could have created a bit more opportunities on set pieces than Morrow. Again, Jürgen played it safe.

In all, he played no worse than Carlos Bocanegra or Oguchi Onyewu did in the 2012 friendly with Canada. I doubt Besler will overtake Bocanegra or Geoff Cameron's starting slot with his play, but I would put his odds at being selected for the final 18 in Hexagonal qualifying at 50/50.

Graham Zusi was an effective player who became stranded up top as the game progressed. He struggled from a lack of touches as Evans, Beckerman, and Omar Gonzalez preferred to work back and forth across the midfield trying to break the Canadian defense rather than poking a ball into the attacking midfielder's area. Zusi's work with Tony Beltran was effective but lacked the creativity and flair that we have seen when Zusi is paired with regular starting rightback Steve Cherundolo. When Beltran was substituted at halftime, Zusi disappeared.

Again, it may be more a reflection of the game tactics than of the players themselves. Witness that Landon Donovan played a virtually identical game to Zusi in the 2012 friendly with Canada. 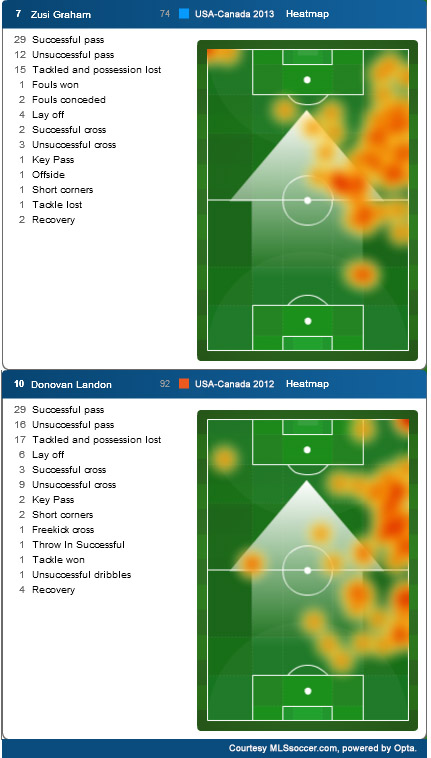 This comparison isn't to equate Graham Zusi as the next Landon Donovan. Playing equally bland in a meaningless Canadian friendly seven months apart only shows how little effort goes into these friendlies. It would be wrong to conclude this kind of effort and creativity will be typical of Zusi as the U.S. attempts to make it to the 2014 World Cup.

The new guy for Sporting KC is also the guy with the most experience on the U.S. national team. He provided a spark of offense along with Josh Gatt in the second half, but his efforts were typical of most players in the game: safe, unassuming, and zombie-like with an occasional request for human brains.

His greatest competition for a final 18 spot is Jürgen's big squeeze, Jermaine Jones. Although Jones' lack of composure is maddening, his potential is much higher than Feilhaber. I don't expect to see Benny in World Cup qualifying, but he could play in the CONCACAF Gold Cup this summer.

From the perspective of Sporting KC fans, this is a good result. All three players have had weeks of training in a national team environment, all appear to be injury-free, and the time Besler and Zusi have spent with Feilhaber will make Benny's transition to the team easier. Much work remains, but nothing they did should bring concern to Sporting fans as the pre-season progresses.

What are your thoughts on the game? Do you think we will see other Sporting KC players in a US Mens National Team uniform soon? Post your comments below.