Sporting KC will have to find a way to survive and pick up as many points as possible the first ten games of the season without Kei Kamara. Luckily, though, they're both deep enough and versatile enough to do so.

Share All sharing options for: How Sporting KC will still score goals until May without Kei Kamara

What was rumored to be happening finally happened on Wednesday when Sporting Kansas City announced it had agreed to loan star winger Kei Kamara to Norwich City until May 6. Kamara will subsequently miss the first ten games of Sporting KC's 2013 Major League Soccer season while playing for the English Premier League club.

Most teams would find it quite difficult to survived the first two-and-a-half months of a season without their most dangerous and consistent attacking player, but Sporting KC are both a deep enough team, and a versatile enough team, that they will be able to amass a respectable number of points in Kamara's absence, positioning themselves more than safely in contention for a 2013 MLS Cup playoff spot if Kamara returns.

The loan agreement has a permanent purchase clause at the end of the deal, so there's always the potential for Kamara to be gone for good. But that's a bridge we'll cross if and when that time comes.

How do you replace your leading goal scorer for the last three straight years? To attempt to answer that, we'll focus on all the different options at head coach Peter Vermes' disposal while Kamara is away. While initial reactions were that losing Kamara on an immediate, permanent transfer would be a devastating blow to Sporting's chances, less than a third of a season is certainly manageable. 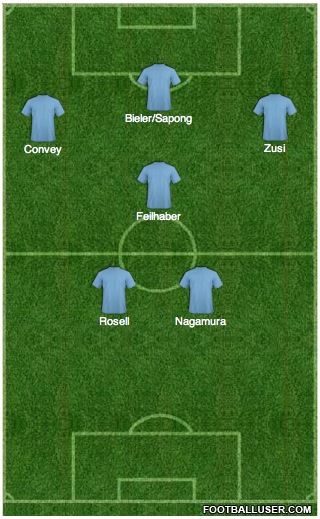 When to use this lineup: The other top teams in the league - for example, Seattle Sounders, LA Galaxy, San Jose Earthquakes

Why it will work: This is front six that provides great stability and balance in the midfield. With two holding midfielders - Oriol Rosell and Paulo Nagamura - Sporting KC will be much less vulnerable on the counter attack than they would with a second midfielder pushed higher alongside Benny Feilhaber. Rosell and Nagamura also will likely be dealing with some of MLS' elite playmakers like Mauro Rosales and Landon Donovan - a task that is sometimes better suited for two men than one.

Zusi offers quality width on the right, as well as typically solid service on crosses, despite lacking anything resembling Kamara's breakaway speed. Convey will keep very wide on the left, allowing Feilhaber to move freely anywhere behind the center forward, which is fairly interchangeable between Claudio Bieler and CJ Sapong. Fullbacks Chance Myers and Seth Sinovic are also required to get forward a little less, shoring things up at the back.

Moral of the story: Stay compact and safe, don't overextend yourself, realizing that goals will be at a premium in top of the league matchups. 1-0 will likely do the trick. 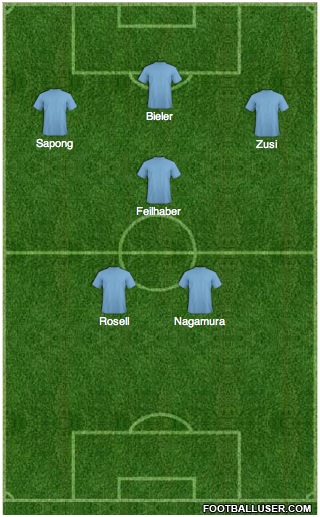 When to use this lineup: Against opponents with tall, physical back lines that deal well with crosses coming into the box - for example, San Jose Earthquakes, Chicago Fire, New York Red Bulls, Vancouver Whitecaps

Why it will work: Much like the 2012 game against San Jose at Sporting Park, this formation will work a lot like a 4-4-2 with Sapong tucking inside much of the time. In that game, it was Kamara would absolutely torched the eventual Supporters Shield winners from the right wing, whipping in cross after cross - one that connected with Sapong to open the scoring - and himself tucking inside to get on the end of a left-sided cross for the game winner. Admittedly, these will be the games where Sporting miss Kamara the most. After all, he did win more aerial duels (171) than anyone else in MLS by 55 in 2012.

Sinovic is the key man in this one, though. With Sapong often times coming inside and foregoing Sporting's presence wide left, things will get very narrow if Sinovic doesn't truck up and down the line to keep the rightback honest and out wide. To compensate for that hole in the back, two holding midfielders are applied once again so Matt Besler can man the wide left areas on potential counter attacks with Rosell falling back into Besler's central area of assignment.

The way target man - Sapong - and the poacher in the box - Bieler - link up and come to an understanding on the field will determine how successful Sporting are in this lopsided attacking unit.

Moral of the story: When push comes to shove - often times literally - and the opposition tries to muscle you out of the box, CJ Sapong will have to shoulder much of the physical load he and Kamara previously shared. 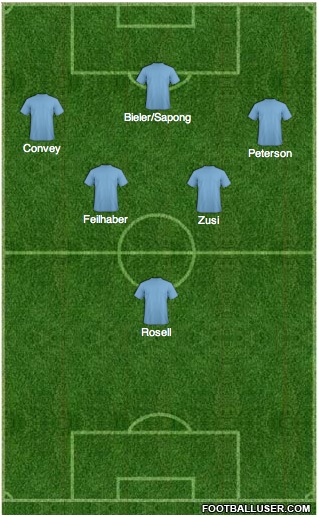 When to use this lineup: When you really don't care what happens behind the front five because you're so far superior to your opposition in every area of the field - for example, Toronto FC, Chivas USA, New England Revolution - or against teams historically known to bunker in and defend against Sporting - for example, Houston Dynamo, D.C. United, Philadelphia Union

Why it will work: This is the dual 'run-and-gun' and methodical setup that Vermes likely had in mind when acquiring Feilhaber. Often times Zusi struggled to break down playoff teams on his own from the midfield, but that is no more with the introduction of Feilhaber alongside him. The trouble is, that was planned, at least initially, with the league's best attacking athlete in the mix as well - Kamara. For everything he lacks against Kamara's tremendous athleticism, Jacob Peterson will make up for with sheer effort and a willingness to put his body on the line for the good of the team.

Peterson stays wide well when instructed to do so, as will Convey on the left, so Myers and Sinovic will be allowed to feel out the game for themselves and make determinations on the fly whether surging forward into the attack is either, a) necessary, or, b) a wise thing to do. Feel pretty confident in those two knowing when to stay and when to go. Rosell becomes much more stationary in front of the back line in this setup, much like Julio Cesar in 2011 and 2012, which isn't a problem at all because Uri is incredibly instinctual as a 20-year old.

It's all down to Zusi and Feilhaber in this one, though. No longer can the opposition aim to take just one of them out of the game, because there's always the other one left to pick you apart. The, a) number, and, b) quality, of through balls played from the midfield to the center forward - again, Sapong and Bieler are interchangeable - will have to be much improved from 2011 and 2012. The greatest knock on those Sporting teams was the lack of the killer instinct and precision to create goals. Now they've got not one, but two players fully capable of filling that void.

Moral of the story: Good teams beat bad teams, and do so in an emphatic way. Pair Zusi and Feilhaber together in the midfield and that's what you're looking to do.

Obviously it's not ideal that Sporting KC will have to play the first ten games of the 2013 season without Kamara, but if there's a team in MLS with the pieces to succeed in doing so, it's Sporting Kansas City.

Kei Kamara loaned to Norwich City until May