An odd scene played out Thursday morning at Sporting Kansas practice. Mexico fans showed up to honor U.S. National Team's Graham Zusi. This is of course a result of the last night of Concacaf World Cup qualifying that turned into bizarro world when Panamanians were rooting for Costa Rica, Mexico was rooting for the United States and U.S. fans were okay with not winning all of a sudden.

So another lackluster performance by Mexico, a late goal by the never giving up Graham Zusi and suddenly Zusi is the hero of Mexico. Images of Zusi on the back of a Mexico jersey and a rendition of him as San (Saint) Zusi quickly flooded social media after the game.

Fast forward to Thursday and Graham Zusi's first day back with Sporting Kansas City, Mexico fans start rolling in throughout practice and after changing Zusi is summoned back out to receive some recognition.

With Zusi wondering what was happening, the Mexico fans quickly put a sheet on him that looked liked a poncho, tied it shut with Sporting KC scarves, put a sombrero on his head and snuck a Mexico scarf around his neck.  A quick St. Zusi written over his heart and they were ready to present him with a couple items.

One was a document that thanked Zusi for keeping their aspirations to the World Cup alive. The other was the drawing of San Zusi that had floated around the internet. 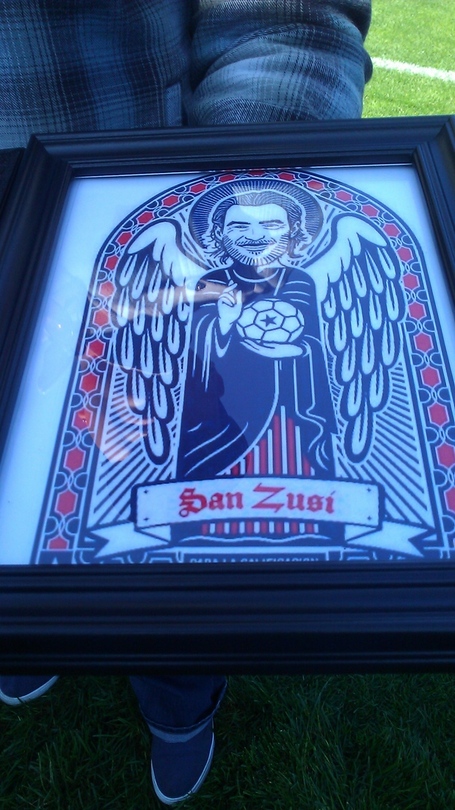 Pablo Gonzalez host of the morning show on La Gran D Hispanic radio in Kansas City explained, "We were really sad when Mexico was losing and Panama was up. Then when we saw the alert about the goal, all the people in the restaurant got really excited. They started screaming as if it was Mexico that scored it, then it was funny when we found out it was Zusi that scored it.We believe in saints and in Mexico when we want something to happen, when we have a wish, we turn a saint upside down. We created this one and we are going to keep it in our studio. We have a deal with Zusi that if Mexico makes it, we are going to come back and give this one to him."

"When I saw that Zusi scored the goal, I said thank you sir, thank you god! We have another game now with New Zealand and we will see if they make it but for now our saint is Zusi" exclaimed Mexico and Sporting KC fan Hector Solario.

The fans even brought representation from the Mexican Consulate in Kansas City to make it more official.

Graham Zusi typically shies away from the limelight; he just wants to go play but he seems to be taking all the attention humbly in stride. "For us being bitter rivals, for them to love us so much at this moment is a little strange," Zusi admitted. "I am sure the next time we are on the field together it will revert back to us being rivals once again."