Follow along as the MLS Playoffs open up today with the Seattle Sounders taking on the Colorado Rapids.

Welcome to the 2013 MLS Cup playoffs. The playoffs open up tonight with the Seattle Sounders hosting the Colorado Rapids in the Western Conference knockout round game.

Seattle finished with the fourth seed after starting off slow to begin 2013, going red hot for a lot of the summer before crashing in their last few games, costing them a chance at a higher seed and the Supporters Shield. Sounder at Heart previews the match from a Seattle perspective here.

Colorado has maintained a good status in the Western Conference all year, hovering around the third through fifth spots. They settled down with the fifth seed at the end of the year after losing two of their last three matches, including a 3-0 drubbing to Vancouver. You can check out the take from the Rapids' SB Nation blog Burgundy Wave here. 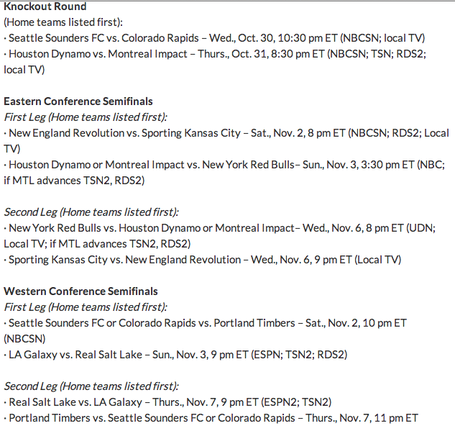 Here's the starting lineup for the Seattle Sounders.

And for the Colorado Rapids