FIFA 14 proves to be a polished version of an already spectacular and addictive soccer simulator. How good is it? Read our review to find out.

At its core, "FIFA 14" is everything that past installments of the series have not been. It's not a game that tests the waters with big changes to game play or added modes. In reality, it's not even a game that pushes the graphical boundaries of a video game. However, it finds success by being more subtle and precise than any past game in the "FIFA Soccer" franchise, redefining it's position in the league: second to none.

Initially, it's easy to ride off "FIFA 14" as an uninspired replication of its predecessor, but spend some time in the game and you'll quickly discover how wrong that assumption is. It's in the little moments that "FIFA 14" grips you. It's when you're able to cut past hopeless defenders with lighting moves, when you're able to escape that final defender with a flick of a trigger, and ultimately, when you're able to line up a world-class shot for the satisfying score, that you find out just how much of an improvement this year's installment is. 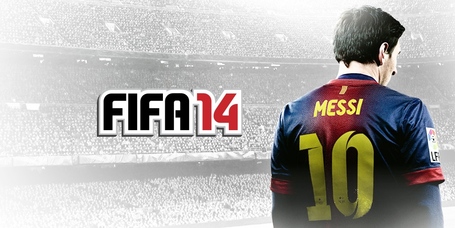 Perhaps a catalyst for all these "little moments," a culmination of every subtle improvement, is teammate intelligence. EA Sports and EA Canada have done a remarkable job at overhauling how your squad responds to your movement on the field. For instance, on the attack, your fellow forwards and midfielders will find pockets of space to provide excellent chances for through balls, while on the defense you'll find your teammates dropping back to provide more support regularly, winning balls back at crucial moments.These adjustments allow for the pace of game to be sped up significantly, which means more opportunities to score.

With the action on the field more fluid, and at times more frantic (in a good way), it's reassuring to see the level of detail EA Sports has put in player animations. The realism in things like volleys, slide tackles and dribbling is second to none, adding to the presentation that the series has so heavily thrived upon over the years through commentators, warm ups, and on-field reactions.

However, it's disappointing that this same level of detail isn't found in the overall look of the game. "FIFA 14" isn't an ugly game by any means, but it's certainly showing signs of aging with lackluster backdrops and on-field layouts. Similarly, the level of detail with each player is inconsistent. World-renowned players like Messi and Bale look stunning, while middling footballers look mediocre at best.

The issue of inconsistency stretches to stadiums as well, or should I say the lack thereof. One would imagine that a big-budget franchise like "FIFA Soccer" could recreate the stadiums for all 600 clubs in the game, or at least those of prominent leagues around the world, but this just isn't the case. The few that are included are excellent and heavily detailed, but, especially as an American soccer fan, the absences of the Sporting Park's of the world is disappointing (especially when they're filled in with generic representations). 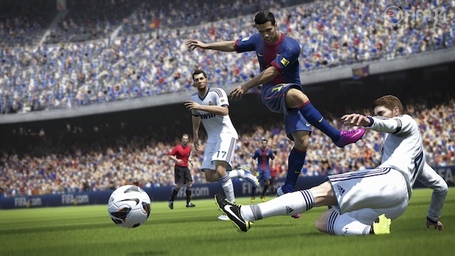 However, where there is few, "FIFA 14" offers more. It's easy to get lost in the simplicity of options in the game. Whether it's managing a club, its scouts, and contracts, or just selecting a player to use in a number of mini games, "FIFA 14" never fails to offer up some enjoyable fun that is consistent throughout the experience.

It's easy to look at the praises of "FIFA 14," put a bow on it, and call it a success, but I find it worth more to look at the game's minor gripes and compare it to past installments. This examination gives a clear view of how far the franchise has come over the years. "FIFA 14" is a polished version of an already spectacular and addictive soccer simulator, and it absolutely warrants an eight out of 10 rating.

Reviewed on Xbox 360 with a reviewer's copy supplied by the publisher for the purpose of this review.