A look into the possible lineups for what could be the final match of Sporting KC's 2013 season.

Saturday night Sporting Kansas City threw out a lineup that made it apparent they were hoping to get out of Foxborough with a draw. When they suddenly went down 2-0 in the second half, it became evident that their safe lineup needed to be changed up. Soony Saad and Dom Dwyer were quickly brought in to help spark the offense and to try and draw a couple of goals back.

I am of the opinion that this should've been the lineup from the start. Sporting's time of possession held in the first half would've resulted in more chances if there is a better attacking lineup out there from the start. Jacob Peterson is good and hustles to every ball but I do not believe he has a better chance at scoring that Soony Saad.

I feel the same with Dwyer over Bunbury. Bunbury had a great move to bring the ball down in front of the goal after a great pass from Zusi in the first half but failed to put the ball in the net. I'm not saying that Dwyer is going to put that ball in the net but based on the small sample sizes for each player this season Dwyer is going to give Sporting a better chance to score.

Obviously Peter Vermes is not going to put out that same lineup Wednesday against the Revolution needing at least a one-goal win to force extra time. The good news is that Sporting KC has the personnel, especially at the forward position, to break down a New England defense.

This is the lineup that I believe Peter Vermes will put out on Wednesday, which shows significant improvement from Saturday. 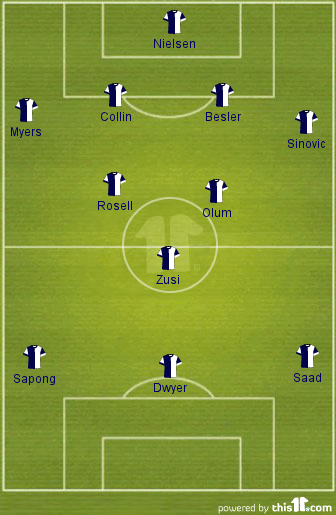 What a difference two players make. Instead of Teal Bunbury and Jacob Peterson, the front line now features two players who have scored this season and have shown an attacking nature during their playing time. Sapong can provide height in the box and suddenly Sporting KC becomes a much better attacking team at Sporting Park.

I, personally, would go further and make even more changes to the lineup. Here is my starting lineup against the Revs. 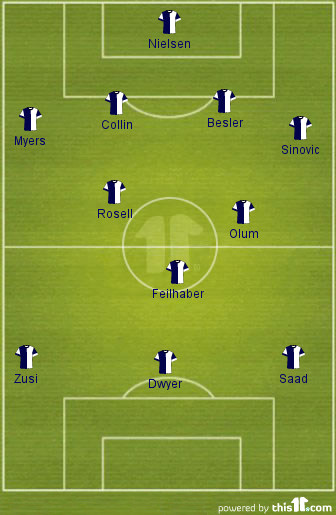 Here I feel is the best lineup that Sporting KC can put out with the personnel they have. Feilhaber was playing well in the midfield until he suddenly dropped off the map. Zusi has shown that he can be productive on the wing and provide good service. If I'm looking for goals, this is the lineup I'm putting out.

I can see the issues from this lineup. Zusi has been manning the helm of the midfield for the last couple of months whereas Feilhaber has been training with the reserves. It could throw off team chemistry and result in poor attacking play. This is why I believe the first lineup above is more likely so that the team chemistry stays intact.

Regardless, the lineup on Wednesday needs to feature better attacking forwards than Saturday. Sporting KC has the personnel to score and they have the history to beat the Revolution. New England has the scoreline advantage but I still feel confident Sporting can pull out a victory.