Looking at a new set of lineup possibilities with the news that Lawrence Olum and Peterson Joseph will not be playing in this match.

Oh how fast the news changes. Only 24 hours after I wrote a lineup preview for tomorrow's playoff match with the Revolution, Sporting KC comes out with this information.

Lawrence Olum officially has a fractured fibular with no timetable for his return. Peterson Joseph's injury was not given but he was ruled out for tomorrow's match. Given that both lineups I gave out had Olum starting in them, it's time to readjust some predictions.

Here's the lineup I expect Peter Vermes to put out tomorrow given all of the recent news. 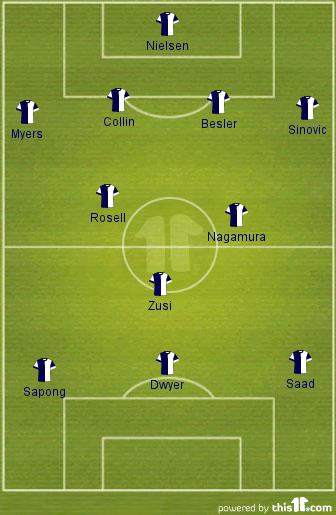 Last Saturday Peter Vermes talked on 810 radio and said he hoped for Paulo Nagamura to be back on Wednesday, which becomes vitally important now. This lineup gives Sporting KC a good defensive midfield while also giving them a solid front line. I would be happy with this lineup, although it's not my perfect lineup. 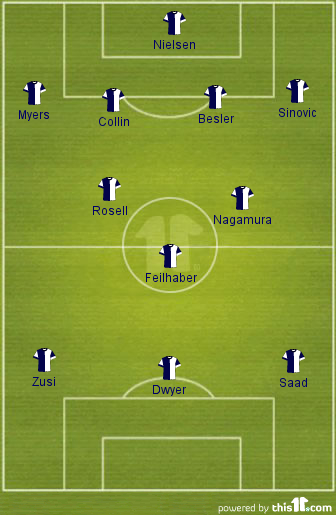 This lineup, in my opinion, gives Sporting Kansas City their best chance to score goals. Benny Feilhaber was playing well before he was dropped out of the lineup for some reason. Zusi can play well on the wing and the combined efforts of Feilhaber and Zusi will give Sporting KC options to score.

One idea I'd like to add to this lineup is that Feilhaber gets subbed out around the 75th minute. He still hasn't shown all year that he can go the Full 90 under Vermes' system, so I propose Sporting KC uses CJ Sapong as a super sub around the 75th minute, switch Zusi back to the midfield and move Sapong to the wing so that we end up with the first lineup above for the last 15 minutes.

If Sporting is still searching for the goal to tie the game on aggregate or to go ahead, a fresh-legged CJ Sapong could provide a huge boost to Sporting's offense. I have faith that Peter Vermes is going to put out a lineup full of attacking players that will get Sporting the goals they need. Let's just hope that they can get them.